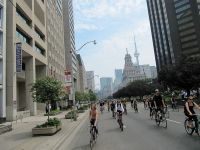 Torontonian cycling infrastructure has been constantly improving and currently offers approximately 35 kilometres downtown and 121 kilometres in surrounding areas of bike routes. A Decima survey from 1999 shows that biking is very popular in Toronto. According to the survey, 48 per cent of Torontonians were cyclists and approximately 60 per cent of households owned bicycles. Toronto bike routes form a network that links Lake Ontario, local rivers, and parkland. 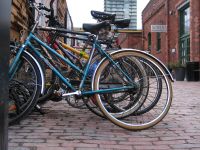 Finding the right bike paths for your needs can seem slightly overwhelming when you first start cycling. But don’t give up right off the bat! Toronto’s website provides a map that lays out all the biking routes at your disposal. The map includes roads with bike lanes, paths shared between walkers and bikers, bike-specific roads, and several other options.

If you want to stay away from streets altogether, there are a number of trails you can consider. There is the Martin Goodman Trail, Moore Park Ravine, Tommy Thompson Park, Don River to the East, the Humber trail to the West, and the Waterfront system along the shores of Lake Ontario.

Other Places Suitable for Biking

Besides the designated bike trails, there are also other areas in Toronto, which are suitable for biking, thanks to low/no traffic and suitable paths.

If you live more on the outskirts of Toronto and want to bike more freely and not get constantly stopped at lights, your best option is to bike away from downtown. Various parts of the GTA such as Thornhill, Mississauga, and Markham provide longer stretches of obstacle-free roadway than the city itself.

All this being said about Toronto’s current state of affairs, the city is consistently considering different options to make cycling more accessible to the average biker. One option they have considered is the concept of protected bike lanes. These are bike-sized lanes that go on either side or down the middle of a busy street that are divided from car lanes by a small curb. These separated lanes give bikers a greater sense of security because they are better isolated from speeding cars.

The city is also looking into the possibility of adding bike lanes on wider streets such as University, Richmond, and Adelaide. There is also the option of extending the bike lanes on Beverley Street all the way down to the Lakeshore. Although these notions are still works in progress, it’s good to know the need for more bike lanes is a topic up for discussion.

No matter your biking needs, there is an avenue available to you. It’s all about using the resources at your disposal (both online and in cycling stores) to find the paths you are most comfortable with. So don’t be afraid; just get out there and get cycling!

3 thoughts on “Bike Paths in Toronto”

Just read about the Robert Bateman Nature Trail dedication in Toronto. Great idea and it sounds lovely. 18km loop walking trail but we are wondering is it also a trail we could cycle on? Or is it strictly for walking? Thanks in advance for any info you could give.

Yesterday I was riding east on the bike route around Colbourne Road, I signalled and looked behind me to make my turn onto the Lakeshore road and all I saw was about 10 bikes racing behind me, I had enough time to get out of the way, I went over my bike and as I lay there bleeding from my knee, elbow, and a sprained ankle I watched them keep going. It was a club as they all had the same shirts on. There is now need to go as fast as they were going on a holiday Monday with hundreds of people on that pathway. I know who they are.

Hi John,
I’m sorry that you had such a bad experience on what should have been a beautiful ride. Fortunately most cyclists are respectful of one another.
Regards,
Jamie.