There’s no doubt that cycling has come under a lot of scrutiny in the past few years. From Michael Bryant’s altercation with a cyclist to the creation and then removal of the Jarvis bike lanes, the two-wheelers have inspired a whirlwind of debate lately. 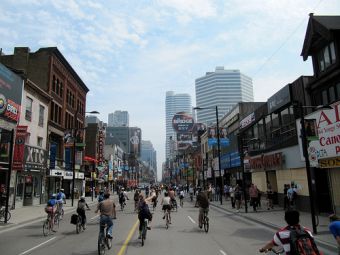 It must be said that Toronto isn’t exactly a cyclist’s city. Bike lanes aren’t as plentiful as they are in Ottawa, and good park trails are a little on the scarce side. Despite these facts, there are over 900,000 adult Torontonians that enjoy cycling regularly, and it isn’t too late for you to join them.

There’s no doubt you’ve heard some of the conflict between activists for cycling and outspoken drivers. The fact is, both bikes and cars are considered vehicles under the Highway Traffic Act and so long as they’re sharing the same roadway, there will always be a certain amount of debate.

However, it’s important to keep in mind that just because you’re biking “in the city,” you don’t necessarily have to feel that you are. Don’t let intimidation keep you from getting on your bicycle! There are plenty of side streets that you can use as alternatives to tackling the busy streets of downtown Toronto. Toronto’s website or any cycling store can provide you with a map of all the routes available to you throughout the city.

Whichever route you choose, it’s a good idea to start by taking a look at Ontario’s Cycling Laws so you’re familiar with bike guidelines. This is an easy way to help protect you and all those around you from accidents. There are an infinite number of resources at your disposal, both online and in cycling stores.

If safety worries are the main issue keeping you from exploring your cycling options, there are lots of things you can do to assuage your fears. Wearing a helmet every time you get on a bike is the easiest place to start. A helmet is the only way to prevent head injuries, so you should definitely be wearing one every time you head out on your bicycle. Additionally, if you’re planning to cycle at night, it’s a good idea to invest in a bike light or flash tape so you’re visible to cars. These lights can stick on to your helmet, the back of your bike, or even your torso. You really just want to make sure cars can see you as well as you can see them.

There are of course pros and cons to biking in the city. On the positive side, they save you money, they’re good for the environment, and they’re an easy way to get your daily exercise. Instead of tediously sitting in traffic, you can be doing something healthy for your body and possibly even get where you’re going faster. But there’s no denying that they aren’t the ideal mode of transit during Canada’s chilly winter months, and they can’t necessarily be your sole means of transportation if you live outside the city or have a long distance to travel to work.

The degree to which you make use of a bike depends greatly on your living situation, but even if it won’t be your primary vehicle, you can still invest in a bike to get you to and from the grocery store in a pinch or to get some easy exercise with friends.

There’s no pressure when it comes to biking. You don’t have to bike along Queen Street in rush hour on the first day. But it’s important to know your options and open yourself up to being able to make the statement, “I think I’ll take my bike today!”