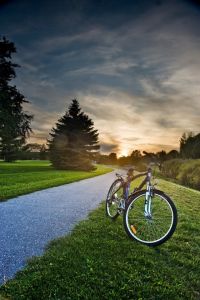 If you find biking in the downtown core too overwhelming or you’ve decided to pursue biking for sport, your best bet is cycling outside of Toronto. The suburbs and outskirts of the GTA have many stretches of roadway with minimal stoplights that are less frequented by vehicles. A good rule of thumb is: the further you bike away from Toronto, the more relaxing a trip you will have.

Nearly any main roadway turns into an enjoyable biking experience when you follow it North of Toronto. Bathurst Street, Yonge Street, and Woodbine Avenue all continue well into Stouffville. There are so many long stretches of road free of stop lights up there that you can bike, virtually uninterrupted, for as long as you desire. There are bumpier patches of road to be navigated, but on the whole, the roads are very workable. The northernmost stretches very rarely have paved sides, so it is often necessary to bike in the single car lane. This can be intimidating when cars race by you at 60 to 80 kilometres per hour, but because there are so few vehicles, they are usually very good about giving bikers enough space. Where possible, keep to the right of the lane, and you shouldn’t have a problem.

Another great suburban area to bike in is Mississauga. Mississauga has a huge amount of bike lanes that interconnect well. Unlike Toronto where there is often a bike lane that goes for a few kilometres and then ends abruptly, Mississauga is a spiderweb of possible routes that gives you an infinite number of travelling possibilities. 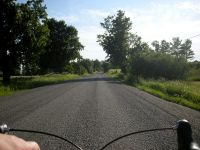 Once you’re out of the downtown core, there are many suburban areas that are ideal for professional cyclists’ needs. Pickering, Oshawa, Markham, and Vaughan all have cycling options available to you. When in doubt, make use of the Bikely Website to find the path that best suits your needs. All you have to do is input the area you want to bike in and the site will generate a list of possible routes for you.

Remember, just because you live in the city, doesn’t mean you have to bike in the city. There are plenty of suburban paths just waiting to be trave;led!