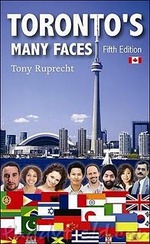 Originally published in 1990, Toronto’s Many Faces (Dundurn Press) has once again been updated by Tony Ruprecht in its 5th edition to accurately reflect the city’s ever expanding patchwork of inhabitants in both numbers and diversity. The book’s inner pull-out map highlights the city’s communities and their significant monuments, and one glance at the illustration dispels the preconception that Toronto is made up of segregated enclaves.

As noted in the introduction, today’s Toronto is made up of more than 168 cultural groups speaking over 100 languages. From Aboriginal to Welsh, the contents alphabetically list the different communities followed by a short contents of simply sketched maps. Each chapter includes a brief history lesson on the settlement and development of the neighbourhood in question followed by “Places To Go” and a calendar of local celebrations and festivals. Contact information is also included for institutions, media outlets, organisations and cultural groups.

The clear headings and bullet points make the material easy to navigate; the contents not only provide an introduction to each community and its traditions, but is also importantly guided by recommendations from local members themselves, making Ruprecht’s book a community project itself.

The multifunctional nature of the book is one of its great assets. Its attention to detail not only pays tribute to the contributions of old and new Torontonians, but also makes it a guide for tourists, resource for newcomers, directory for businesses and organisations, and cultural passport. Think of it as a better organised, more concise and useful Yellow Pages.