Every summer, Toronto becomes the centre of the jazz universe. The best jazz artists from all around the world meet here every year to warm the hearts of jazz lovers. The whole town is struck by a jazz fever during the two major Torontonian summer jazz festivals: the TD Toronto Jazz Festival and the Beaches International Jazz Festival.

One of North America’s premier jazz festivals opens its 25th season this year. Over 24,000 artists have played for about 7.5 million people during over the previous 24 years of the festival. Not many people would expect that an eight-day showcase of jazz in 1987 could grow into a huge annual festival with more than 350 performances and over 1,500 musicians performing at approximately 40 locations around Toronto.

This years’ kick-off was a huge succes, unlike last year when the opening weekend suffered because of the G20 summit chaos. The festival returned to its roots at Roy Thomson Hall and launched with a free Aretha Franklin concert on Friday night (June 24th) at David Pecaut Square (formerly Metro Square).

The TD Toronto Jazz Festival continues in its openness and also offers lots of blues, hip hop, and soul. Even though the festival has already began its 25th season, this year has several firsts: it has its first comic performance, Reggie Watts, its first opera singer, Jessye Norman, and a significant jazz first: jazz legends Brandon Marsalis and Joey Calderazzo will for the first time perform together on stage. 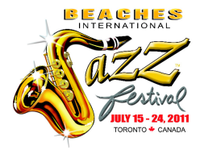 The beautiful lakeside Beaches community of Toronto hosts a 10-day music festival each July, showcasing jazz, blues, big band, vocalists, African, Caribbean, reggae, Latin, rhythm and blues, and much more. This year’s festival will take place between July 15th and July 24th. Performances are held at several open-air venues offering visitors many different attractions and activities both at the Festival and at the Beaches. There are six main stage locations where you can enjoy the biggest concerts: Kew Gardens Main Stage, the Latin Square, Big Band stages, the Woodbine Park Main Stage, the New Generation stage, and the Youth stage. Then there are three nights of more than fifty bands performing as part of the street fest.

One of the most popular features of the Festival is its workshops. There is a huge variation of free workshops offered, such as the Comedy Improv workshop, Vocal bootcamp, and Ukelele workshop, or salsa, meringue, and swing dance classes. TD Canada Trust carries out a special Jazz Workshop and Lecture series in the Mennonite New Life Centre.