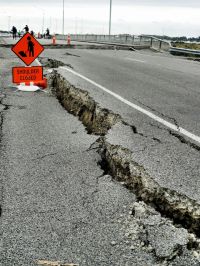 Seismic activity in Canada is surprisingly high when compared with other countries. Approximately 4,000 earthquakes shake Canadian soil every year. Most of these earthquakes aren’t strong enough to be felt, but this serious hazard shouldn’t be underestimated. Earthquakes that are strong enough to be felt strike Canada nearly every week, destructive ones happen every few years or decades, and unfortunately, some of the world’s strongest earthquakes ravage Canada in cycles roughly every hundred years.

The highest rate of earthquakes is along the active plate boundaries of the west coast. Other areas of substantial seismic activity are: the Cordillera, the Arctic margin, the Ottawa and St. Lawrence river valleys, the northern Appalachians, and the eastern offshore margin.

Our knowledge of the first Canadian earthquakes is full of voids and inaccuracies since the major source of this information is Huron oral tradition. Apparently, the earthquake history of Canada dates back in the mid 1500s. One of the earliest documented significant earthquakes that struck Canada was the Charlevoix earthquake of 1663. It was accompanied by several landslides, which were the main cause of its destructiveness. Apart from the landslides, it was only strong enough to shake walls and crack chimneys, as is mentioned in Brigham’s Historical notes on the Earthquakes of New England. It occurred in the St. Lawrence river valley region, between the mouths of Rivière La Malbaie and Rivière Oulle. This wasn’t the only strong earthquake in this particularly hazardous region. Another four significant earthquakes with magnitudes higher than 6 Mw followed in 1791, 1860, 1870, and 1925.

One of the strongest earthquakes in Canadian history struck the Cascadia subduction zone in British Columbia on January 26, 1700. This mega-thrust earthquake, which made a 1000-kilometre-long crack in the undersea Cascadia thrust fault, generated enormous shaking and a gigantic tsunami. The winter village of Pachena Bay on Vancouver Island was completely swept away without any survivors. Most of the houses in other parts of the island were destroyed. According to the oral traditions of the First Nations people on Vancouver Island, the trembling was so vigorous that people couldn’t stand and became sick.

The region of central Vancouver Island, where the Juan de Fuca, Explorer, and America plates interact, is a hotbed of seismic activity. There have been six larger earthquakes since 1918 in this region. Two of them exceeded magnitude 7. An exceptionally violent earthquake occurred near the west coast of Vancouver Island on December 6, 1918. The intensity of this earthquake was felt as far as Kelowna and in northern parts of Washington state. It damaged the Estevan Point lighthouse and a wharf at Ucluelet. Vancouver Island’s largest historic earthquake struck on June 23, 1946 with a 7.3 magnitude. Its destructiveness caused substantial damage on Vancouver Island. Two people died during this earthquake, and many buildings were significantly damaged. Approximately 75 per cent of chimneys in the closest communities were knocked down.

On November 18, 1929 a huge earthquake known as the Laurentian Slope earthquake struck the southern edge of Grand Banks in Newfoundland. The damage on land wasn’t fatal: chimneys on Cape Breton Island were smashed or cracked, and some highways were blocked by landslides. However, an enormous submarine slump tore twelve transatlantic cables in several places and produced a huge tsunami that devastated the Burin Peninsula in Newfoundland. The outcome was catastrophic: twenty-eight people died, and property losses were estimated at more than $1 million 1929 dollars.

Another extremely strong earthquake happened in Baffin Bay on November 20, 1933. It’s the largest recorded earthquake north of the Arctic Circle (magnitude 7.3). Fortunately, there was no damage caused thanks to its distant offshore location.

The largest earthquake in Canada since 1700 occurred on August 22, 1949 on the Queen Charlotte Fault. The intensity of this earthquake (magnitude 8.1) was so powerful that cows were falling down on Haida Gwaii. Buildings were trembling, chimneys were destroyed, windows were broken, and an oil tank at Cumshewa Inlet was smashed.