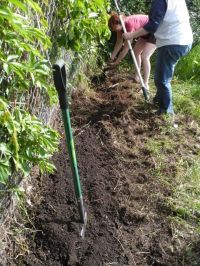 There’s an abundance of kinds and styles of garden landscape designs and even more puzzled homeowners who are trying to solve the dreary question of their garden design. One of the most common results of this tricky gardening problem is an unnecessarily complicated and crammed garden composed of an ill-sorted mix of diverse garden features. Of course, the only limit of the design of your garden is your imagination. However, combining aesthetic garden features of various design styles can be very tricky and therefore it’s much safer to stick to a particular garden design type. Here is a list of several popular garden styles that you can design and construct in your garden. 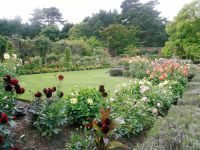 The English Country Garden landscape is a garden style that became popular in England in the early 18th century. It had quickly spread across Europe, and nowadays it’s one of the most popular garden styles in this region. A classical English country garden always involves a colourful and informal mixture of unique flowers that bloom during summer. This style is suitable for any kind of garden, no matter how big or small, and can be adjusted to blend with any type of houses.

The garden can be constructed in such a way that plants seed themselves and create their own arrangements and you don’t have to spend so much time taking care of it. These gardens often involve statues, water features, pavilions, shrines, and lush greenery. When creating an English country garden, use plants with a variety of heights and colours as these gardens often have a wild, unsorted look.

If you want to enjoy the typical peaceful atmosphere of an English country garden, create an oasis with a pond, a small patch of grass, and benches around where you can sit, sip tea, and relax. 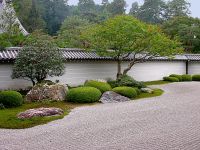 The Japanese Zen garden or “kare sansui“ is a special type of a dry landscape garden influenced mainly by Zen Buddhism. Zen gardens were created by Zen Buddhist philosophers and monks according to special rules and methods. It’s a garden dedicated to contemplation, where one should learn how to live in peace and harmony.

It’s an interesting fact that, unlike European gardens, a Zen garden is not based on symmetry because according to the Zen perspective, harmony doesn’t emanate from symmetry but from our relation with nature. They used odd numbers of rocks, trees, and plants, and their arrangement also had to be uneven. A Zen garden features merely stone and sand and several minimalistic features such as a bonsai, bamboo, mosses, korean abies, small ponds or waterfalls. Remember: paths and walkways should never be straight as chi energy should flow lightly.

The French garden is a specific style of formal garden based on symmetry and the principle of correcting nature. The biggest influence and expansion of French gardens was in the 17th century, when European rulers followed the trend of the great and beautiful gardens of Louis XIV in Versailles. However, we can trace the origin of geometrical and symmetrical French gardens to renaissance Italian gardens.

The French garden style is most often used when landscaping huge, formal structures like museums, private mansions, etc. A classical French garden is characterized by a symmetrical, precise, and formal layout with well maintained hedges, lawns, trees, and shrubs riveting one’s eyes on a building. 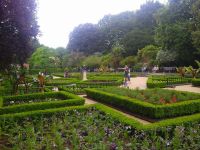 The Dutch garden is a gardening style that applies geometric patterns and efficiently uses space to arrange brightly coloured flowers and dense shrubs in a small, confined space. A Dutch garden is characterized mainly by its wide scale of colourful plants such as tulips, anemones, calla lilies, narcissi, smaller rose varieties, snow drops, daffodils, and crocuses.

The Netherlands is one of the most populated countries in the world, and this fact is reflected in their gardens. Homes in the Netherlands have a limited amount of space and only small plots of land available. Therefore this type of garden is based on the perfectly efficient use of space and light combined with symmetry, rectangular shapes, and numerous ponds or waterways. Grass or other supplements can’t be seen very often in Dutch gardens. Furthermore, they don’t plant large trees with overhanging branches due to the lack of space between houses. Instead, they plant short, manicured shrubs or low walls which that the garden and create the geometrical arrangement. 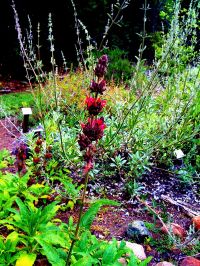 A native garden is a special type of landscaping that uses only native plants from the geographic location of the garden. There are various organizations throughout the world that support native gardens, as there are many advantages of planting plants that are already adapted to the local habitat. These organizations help gardeners to decide which plants are local and give them advice about their maintenance.

These gardens aren’t very demanding since indigenous plants grow naturally in a particular area. Moreover, native gardens are also economically advantageous since fewer tools and materials and less care is needed for their maintenance. If you plant a native garden, you can almost be sure that it’ll survive the worst weather conditions because these plants are acclimated to their environment.

Tropical gardens are becoming more and more popular among gardeners from countries with colder climates. For many people, it’s an adventure to plant thousands of plants and flowers native to a tropical climate with huge rainfalls and abnormal warmth. These gardens are without any doubts extremely demanding, as they have to be heavily irrigated, fertilized, and mulched. On the other hand, the idea of having your own rainforest paradise in your yard is more than entertaining.

Fruit trees like papaya or banana are excellent not only because of their delicious fruits but also thanks to the tropical atmosphere they create. A tropical garden should always be stuffed with spectacular colourful blooming plants and bushes such as hibiscus, jasmine, lantanas, and bird of paradise. Water features are vital for every tropical garden. Not only do they provide irrigation, but they also help to create a tropical atmosphere.