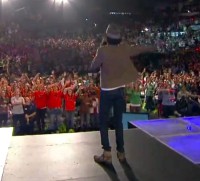 We Day, by Free The Children

We Day is a youth-oriented festival happening in Toronto right now. This is the first festival of the 2011 We Day series and the fourth anniversary of the event. It takes place today, on Tuesday, September 27th at the Air Canada Centre.

Performing and/or speaking at the festival will be Free The Children co-founders Craig and Marc Kielburger, Nelly Furtado, Danny Glover, and even Mary Robinson of the UN.

After Toronto, the festival will arrive at the following cities:

We Day is an initiative aimed to empower youths in the developed world “to achieve their fullest potential as agents of change.” The focus on the youth stems from the history of Free The Children, which was founded by then twelve-year-old Craig Kielburger and has been run by him since 1995. Today, the organization is “the world’s largest network of children helping children through education.” It unites over a million young people across 45 countries.

Among the largest projects of Free The Children is the campaign for alleviating the human and economic toll taken by the droughts in East Africa. Free The Children has been supporting East Africa for twelve years. Currently, you can donate a modest sum to fight acute food shortages and help feed a child or a family. In addition, you can support the implementation of long-term solutions by donating your money to one of the larger projects. 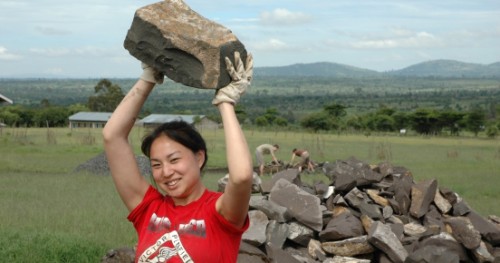 Brick by Brick by Free The Children

Brick by Brick is an initiative that ensures that schools are built in various parts of the world. Help your children’s school raise $8,500 and watch how Free The Children builds an entire school for a community that has not had access to education. This is a part of the Adopt a Village development model, which also includes the Clean Water program.

At the end of October, children are encouraged to collect non-perishable food items for their tricks during Halloween and donate them to a local food bank. This is a way of making tangible impact closest to home and making sure that everyone gets his or her treat this year.

Finally, interested teenagers can contribute to the We Day organization by volunteering to help during one of the We Day events across Canada.

How do you assist your own children in helping others? Let us know in the comments, please.