Have you ever waited impatiently at a transit station for someone ahead of you to count out their exact fare? Have you ever made a big purchase at a shop only to realize frustratingly that you forgot your loyalty points card? Or have you ever wished to go about your day without your burgeoning wallet, overflowing with change, cards, and coupons? Well, you may be interested to discover that soon, you can replace the contents of your wallet with your smartphone. Say hello to mobile payment and digital wallet technologies.

Right now, these technologies are at an exciting stage of development in North America. Corporations like Google, PayPal, Visa, and MasterCard are intensely researching, testing, and marketing ways to add financial functionality to the smartphone. The goal is to integrate everything your wallet provides into one app: your bank and store credit accounts and the ability to make point-of-sale payments, as well as retailer discounts and special promotions.

Though the technology is still in the development and testing stage in Canada, many analysts in the technology sector predict that in a few years, mobile payment will join cash, credit, and debit as a standard method of payment. In fact, since you will be able to store all your accounts, payment types, and loyalty programs digitally on your smartphone, you could basically throw out your entire wallet. In addition to less weight in your pocket, mobile payment will be convenient for situations when you don’t have time to dig for change or search for the right card: public transit and the coffee shop are two prime examples.

How Does Mobile Payment Work 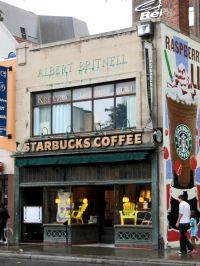 You may be wondering how exactly you would make a purchase with a smartphone. The key to how mobile payment works is something called Near Field Communication (NFC). This is a technology that allows data to be sent wirelessly over a short distance, typically no more than a few inches. So when you’re ready to pay for your coffee, you would simply tap your smartphone on the NFC terminal at the cash register to send your money wirelessly to the merchant. Depending on your security settings, your smartphone may prompt you for a PIN as a security measure, or it could simply charge the money from your account immediately.

NFC mobile payment requires a smartphone equipped with a NFC microchip. In North America, NFC-enabled phones are currently limited to a select few models like the Samsung Nexus S 4G and the Blackberry Bold 9900. However, with the amount of interest, research, and money invested into this technology, it’s very likely that smartphones released from now on will be NFC-enabled.

Though mobile payment and digital wallet technologies have yet to become mainstream, they are already in use in more places than you might have realized.

Starbucks Canada is one of the first retailers in the country to incorporate digital wallet technology. The coffee chain offers an iPhone app that functions as a Starbucks store credit card; patrons can pay for coffee with with a tap of their smartphone. This technology doesn’t actually use NFC, however; the app simply displays the Starbucks credit card barcode for the cash register scanner to scan.

MasterCard started offering its PayPass NFC technology on banking cards several years ago; it has now transferred that technology to smartphones via the NFC sticker and the iCarte Wallet app. The sticker contains the NFC microchip needed to make mobile payments.

Similar to MasterCard, Visa implemented NFC technology on its banking cards and has since made the jump to smartphones. You can use Visa payWave on your mobile device by downloading the Visa Mobile app, then inserting a NFC microchip into the SD slot of your phone or in the iCarte NFC reader accessory for the iPhone. 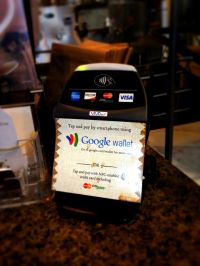 Right now, the Google Wallet app is only available in the United States for MasterCard customers, but it is expected to launch in Canada in early 2012. It’s a digital wallet app that gives access to your credit and debit accounts so you can make purchases with your smartphone. So far, Google Wallet only works on the Samsung Nexus S 4G smartphone, which has built-in NFC. Visa and American Express compatibility are coming in the near future.

Other Uses of Mobile Payments

Although the possibilities are vast and impressive, early market research shows that the general public will need to be educated and “sold” on the idea of paying for purchases via their smartphones. Marketing will also be crucial: promotions, offers, and incentives like instant discounts will be needed to entice people to make the leap to mobile payment.