The liveability rating is a very prestigious figure and it’s a huge honour for any city to rank in the top positions. The main aim of liveability surveys is to examine and assess living conditions in different locations around the world and determine which places have the best and the worst living conditions. The results are used by employers assigning hardship allowances as part of expatriate relocation packages as well as by city councils, non-government organizations, and corporate entities that compare and benchmark regions with different liveability ratings. Furthermore, the annual city rankings always draw extensive attention of media coverage and become objects of many discussions. It’s interesting that Toronto, the city that finished at the fourth place in the world liveability ranking, was ranked by another survey as the 88th best place to live in Canada. This article analyzes the methodology of different surveys and Toronto’s position in them.

Toronto in the Liveability Ranking of The Economist Intelligence Unit

The Economists Intelligence Unit’s liveability rating measures the challenges that could affect an individual’s lifestyle anywhere around the world and that can be directly compared with different locations. There are more than 30 qualitative and quantitative factors assessed across five wide categories, which are stability, healthcare, culture and environment, education, and infrastructure. Each of these factors are then rated as either acceptable, tolerable, uncomfortable, undesirable, or intolerable on a 1-to-100 scale, where 1 represents and intolerable situation and 100 stands for ideal. The liveability rating is calculated both as an overall score and as a score for each category.

The last EIU liveability ranking, which was released in August 2011, designated Melbourne as the most liveable city with an overall rating of 97.5. Toronto finished at fourth place for the third time in a row, only 0.3 points behind Melbourne. The only Canadian city that was able to beat Toronto was Vancouver, with 97.3 points. 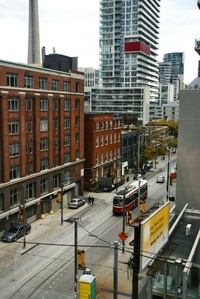 Toronto reached the highest possible rating in three of five basic categories: stability, healthcare, and education, and 100 in the stability category, which accounts for 25 per cent of the total score — which is a very positive sign. This category consists exclusively of factors concerning people’s safety such as the prevalence of petty crime, the prevalence of violent crime, the threat of terror, the threat of military conflict, and the threat of civil unrest/conflict.

Toronto did a bit worse in the culture and environment category, reaching 97.2 points. This category is of the same importance as the stability category and comprises 25 per cent of the overall rating. It’s measured by using information from external sources such as Transparency International and the evaluation of the average weather conditions. It wasn’t a surprise that in the extensive diversity of relevant factors affecting the overall score in this category such as humidity/temperature rating, discomfort of climate to travellers, the level of corruption, social or religious restrictions, the level of censorship, sporting availability, cultural availability, food and drink, and consumer goods and services, there were some in which Toronto didn’t reach the ideal score of 100.

Toronto received a very low score in the infrastructure category, with only 89.3 points. This category amounts to 20 per cent of the overall rating and considers factors such as the quality of road networks, the quality of public transit, the quality of international links, the availability of good quality housing, the quality of energy provision, the quality of water provision, and the quality of telecommunications. One of the main reasons of this failure is the catastrophic commuting situation in Toronto, where people spend significantly more time commuting than in any other city in Canada. The city is overcrowded with cars as more than 70 per cent of Torontonians travel to work by car, and this number is expected to grow by 1 million more cars in 20 years. The support of active transportation in Toronto is an important issue that should be dealt with as soon as possible.

Compiling a list of the best places to live in Canada without including Toronto or Vancouver in the top ten is always considered contentious. MoneySense, a Canadian personal finance website, annually publishes a list of the best places to live in Canada, and both Toronto and Vancouver tend to receive only mediocre score in the ranking. This year’s ranking evaluates 190 Canadian cities and towns according to municipal data and information from Statistic Canada and other sources. The winner of this year’s ranking is Ottawa with a score of 74 points out of a possible 105, while Toronto finished 47th and Vancouver 56th. Even though the ranking is not as prestigious as the one provided by The Economists Intelligence Unit, its results should demonstrate the quality of life in different Canadian regions.

MoneySense assesses 190 cities and towns in Canada in 22 separate categories. They work with information on Census Metropolitan Areas (CMA) and Census AGglomeration (CA) areas as defined by Statistics Canada. CMAs of Toronto, Montreal, Vancouver, Quebec City, Hamilton, Ottawa-Gatineau, St. Catharines-Niagara, Oshawa, Edmonton, Victoria, and Kitchener-Cambridge-Waterloo were divided into their component cities of 50,000 or more in population.

Each city and town could receive a total of 105 points, while every single category was assigned a certain number of points according to the importance of the category. The best city in each category received the maximum number of points, and the rest of the cities received descending incremental points based on their ranking.

Calculations for some other categories follow a slightly different methodology. For example, in the category of population growth, an annual rate of 7.9 per cent was considered ideal. Anything below or above that rate loses points and cities with a population loss got zero. The same is true for the subcategory of precipitation, which makes up part of the weather category. (The ideal number is 700 mm a year, with anything above or below that losing points accordingly.) 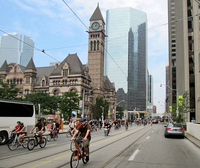 Furthermore, a bonus of 5 points was awarded depending on the percentage of people employed in arts, culture, recreation, and sports. Each city is the compared to all other cities to determine the best places to live overall.

Toronto finished in MoneySense’s list at 47th place; however, there were vast differences among particular categories. The percentage of people who walk or ride a bike to work in Toronto was 8.82, which was better than in 130 other Canadian cities. Toronto lost a lot of points in the housing category, mainly due to the high average house price ($474 300), which was the 26th highest in the whole country. The average household income in Toronto was estimated to be $94,526. which was enough for a mediocre 48th place. On the other hand, discretionary household income (it was calculated as a percentage of total household income derived from 2012 estimates) ranked as number 28. Furthermore, the percentage of new 2009-2011 cars bought in Toronto was 17,61, representing the number 31 in the new cars category. Toronto ranked number 4 according to provincial sales and income taxes. The population growth rate in Toronto, which was 4.5 per cent between the years 2006 and 2011, represented rank number 71.

Toronto was number 75 in crime severity rank and number 89 in violent crimes rank but managed to finish as the 27th best in the overall crime category. There are 2.07 doctors for every 1,000 people in Toronto, representing rank number 110. Toronto ranked 157th according to the percentage of people employed in health occupations. The unemployment rate in Toronto reached 9.4 per cent and overall rank number 156. According to Environment Canada, there are 155.9 precipitation days in Toronto and the average volume of precipitation per year is 835,9. Toronto was the 6th best city in the culture category, which is determined by the percentage of people employed in arts, culture, recreation, and sports.

It’s hard to determine the quality of life in a certain area and compare it with the rest of the world. The general well-being of individuals is a relative indicator that cannot be measured with scientific accuracy. However, differences between Toronto’s performance in EIU’s and MoneySense’s rankings are so vast that you wouldn’t believe that they assessed the same city.

This is caused by the fact that EIU’s rating focuses mainly on criminality and healthcare while MoneySense gave high importance to weather and average house prices. The weather in Toronto is enjoyable; however, house prices are relatively high. This was one of the main disadvantages of bigger cities such as Toronto or Vancouver where people earn more and therefore spend more money on housing. Overall, Toronto didn’t do as badly in the MoneySense “Best Places to Live“ survey as it might seem. The results in individual categories were decent; however, there were several categories that drew Toronto back. MoneySense’s ranking lacks balance between individual categories and therefore enables smaller cities to score more overall points. EIU’s rating reflects the quality of life in a certain area in a wider context and therefore creates a more adequate overview.

One thought on “Best Places to Live in Canada: How Does Toronto Rank?” 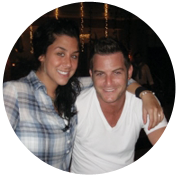