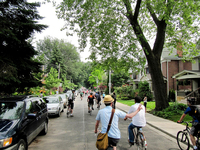 The topic of motorists and cyclists sharing the roads is a touchy one. Drivers and bikers are seemingly at odds with one another, as if they’re fighting for dominion over Toronto’s busy streets. Arguments flare on blogs and forums, from those who demand that cyclists go through a license test, to the loud cries of dissent whenever street parking makes way for bike lanes. The mayor’s stance only adds fuel to the fire: Rob Ford has gone on record to say that Toronto’s roads are for cars, buses, and trucks, but NOT bicycles. He even went as far to suggest that it’s the cyclist’s own fault if they get injured or killed from a car collision. No wonder Toronto saw a net loss in bike lanes last year—more lanes were removed than created. And, no wonder the transportation debate feels so hostile that we first named it “war on cars”, then “war on bikes”.

For the cyclists, it’s easy to blame the sorry state of Toronto’s cycling infrastructure on the mayor. However, the truth isn’t quite so one-dimensional. Last year, Ford actually gave the go-ahead on building the very first curb-separated bike paths in Toronto, slated to be completed this year. Likely to be on Sherbourne St. and Wellesley St., the curbed paths are still a ways from being completed, and it still put Toronto years behind many North American cities, but it’s definitely a turn in the right direction.

Cycling infrastructure, the network of bike lanes, shared roadways, bike-only roads or paths, and associated signage, is a fundamental necessity for bike riders. They’re as important as traffic lights, marked lanes, and street signs for drivers. Infrastructure allows cyclists to get where they need to go quickly and safely while sharing the streets with motorized vehicles. Here, Toronto needs major work: 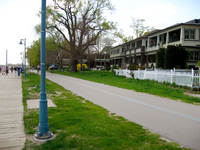 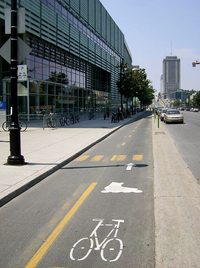 Speaking of Montréal, the situation in one of the leading cities for cyclists in North America is like night and day compared to Hogtown. While Toronto drivers protest furiously whenever parallel parking space is threatened to make new bike lanes, Montréal just announced a $10 million plan to upgrade its cycling network, continuing its trend of constant improvement year after year. Québec also has a province-wide association dedicated to promoting cycling lifestyle, safety, and knowledge, called Vélo Québec, with TV, radio, and Web campaigns designed to make cycling more socially acknowledged. And yes, Montréal has the whole nine yards when it comes to infrastructure: curb-separated bike paths, bike boxes, colour-differentiated bike lanes, sharrows, the aforementioned BIXI, even two bike lanes to one car lane.

What will it take for Toronto to get to that level of infrastructure? It’ll take a big shift, not only physically on the streets but also socially. The cycling situation here has gotten very political, and it doesn’t need to be. We need to stop pitting cars against bikes, motorists against cyclists. We need a change of perspective, by reinforcing that cyclists have a right to be on the road, and that motor vehicles should share the road with bicycles.

This is where education, promoted by an organization like Vélo Québec, proves valuable. It starts with something as simple and essential as watching for cyclists when you open a car door after street parking, and not using bike lanes as parking or stopping zones. If motorists can come to understand that cycling is a viable mode of transportation, and that cyclists belong on the streets, they wouldn’t be so upset when street parking is sacrificed for new bike lanes. It’s time to stop accusing cyclists of taking road space away from motorists, of making roads more dangerous or of worsening gridlock. The city—cyclists, motorists, politicians, and everyday folk—needs to leave this antagonism behind and learn to accommodate different wheels for different folks on the same road.