It came seemingly out of the blue. In early June, Rob Ford met with city council to debate ending the 5-cent plastic bag fee, which he felt it was an unfair cost to consumers every time they shopped. Instead, Councillor David Shiner took it a step further and put forth the motion to get rid of plastic bags altogether. He said it was a last-minute decision, made with the environment and shoppers in mind.

Perhaps more surprisingly, the motion passed in council. Come January 1, 2013, stores in the city will have to switch from giving or selling customers “single-use” plastic bags to bags made of other material.

In theory, this is great news. Plastic bags, while convenient, are notoriously horrible for the environment. When they are littered, these seemingly innocent polyethylenes can cause havoc: clogging drainage grating and leading to street floods; strangling, suffocating, or choking animals to death on land and at sea; and generally being a major source of marine pollution. Even when they are properly disposed of in landfills, the problem doesn’t go away, literally: plastic bags take centuries to decompose. Though plastic bags can be recycled into lawn furniture, the process required lots of power and resources. In addition, plastic bag production requires petroleum, making it another component of our reliance on fossil fuel. 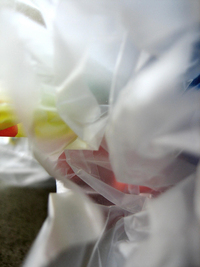 Abstract View of a Plastic
Bag by Sean McMenemy

In practice, however, this out-of-nowhere ban has some people flustered, including the mayor and retailers across the city. One of the reasons for their reaction is money. A plastic bag ban would affect all retail stores as well as potentially thousands of jobs in the plastics industry. Shops have a few options to deal with the change, all of which look like an additional cost burden:

The other big problem is the process of arriving at the ban, or lack thereof. There were no official studies or or consultations done before the motion was put forth and passed. This not only looks bad politically, as if this issue didn’t concern Torontonians enough for it to be made public beforehand, but it also looks shaky in terms of the ban’s feasibility and effectiveness.

Toronto is not the first city ever to ban polethylene bags; Seattle and Los Angeles both recently greenlit the same ban, while around the world, Mexico City, Mumbai, and countries Rwanda, Bangladesh, and China have already banned plastic bags. Studies could’ve been done to look at the causes and effects of the ban in each area, with a published report to boot. A discussion with industry, environmentalists, and consumers should’ve also taken place, to gauge the impacts (ecological, financial, and otherwise) that such a ban would trigger.

Finally, there’s also some complexity with how green this ban could be. Several studies show that paper bag production actually consumes more water, emits more greenhouse gases, and produces more waste than plastic bag production. Thus, there needs to be more than just a ban; there needs to be a system set up for a substitute bag that is green, convenient, and cost-effective.

The environmental benefits of banning plastic bags are potentially enormous, but its rushed execution may land the idea in the trash. It would be a shame if the ban stalls, doesn’t get implemented, or worse yet, turns out to have little environmental impact, simply because it isn’t properly handled.