Dining at the CNE

A few years ago, deep-fried butter was big. Later, there were rumours of hamburgers that used donuts instead of buns. This year, the food fad at the CNE is bacon, which seems tame in comparison, until you see what’s being done with it (chocolate of some kind is often involved). Fortunately for the less adventurous, the Exhibition is well stocked with more conventional fare. Tim Hortons, Subway, Pizza Nova, Coffee Time, and Swiss Chalet all have an outlet in the Food Building, as do many ethnically-flavoured vendors. Those hoping to go through the CNE without overdosing on meat or deep-fried batter can do so at the many spots that offer vegetarian and “healthy choice” dishes. Halal, kosher, and vegan selections are also scattered throughout the building. Here is a very general overview of what to expect.

It seems almost sacrilegious to go to the CNE and not eat something deep-fried. Battered mars bars, twinkies, Jos. louis, and cheese cake can all be found here, or you can indulge in the one of the bizarre bacon-themed dishes celebrated at the CNE this year. The Bacon Nation booth offers up dishes such as bacon and nutella sandwiches and beer-battered, bacon-wrapped hot dogs (deep-fried, of course, and actually rather good, if your arteries don’t turn to cement at the thought). The non-bacon novelties available include shepherd’s pie or pizza toppings served in cones at Just Cone It!, hybrid chocolate eclair hot dogs at Maple Lodge Farms, and the sweet, floppy pastries sold at Beaver Tails.

Although Canadianised to varying degrees, the selection of ethnic foods at the CNE is significant. India, China, Germany, Mexico, and the Netherlands are only a few of the regions represented in the Food Building. And then there is Mrs. Bridges British Bakery, which gives you some warning about what you’re getting into with menu items like haggis pie and mushy peas. Even something as innocent-seeming as a sausage roll (hot dog sized, and $ 5.75 once you add the tax) is respectably greasy and contains slightly alarming meat. For about the same price, you can also get a meat, cheese, or spinach pie from the Lebanese bakery Thyme and Olive. The spinach and feta option here is pleasant and unexciting, as well as being fairly grease-free and easy to eat. It’s also triangular, for some reason.

Fresh Drink at the CNE

Back in the good old days when every kid walked uphill both ways to get to school, the Food Building gave away tons of free samples. Now, of course, CNE food costs a small fortune; the bacon-wrapped hot dog on a stick is $8.99, and a Beaver Tail with lots of toppings is $7.00. The blow is somewhat softened in some cases by the existence of ‘Cents of Taste’ coupons (shaped like a coin, and hidden in the Toronto Star newspaper), which get you a free drink from most participating vendors. Exhibition drinks are not quite as varied as the food, but there are some places like Freshly Squeezed and Booster Juice which specialise in liquids only. Booster Juice will give you a dollar off a regular sized smoothie for one ‘Taste’ token, but you’ll still be paying about $1.50 more than you would for a medium smoothie from Freshly Squeezed (on the other hand, Booster’s ‘regular’ size is bigger, and the smoothie is thicker). 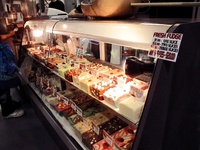 Desserts at the CNE

A vast assortment of sugary things are available at the CNE, from the famous funnel cakes, to apple fritters and Tiny Tom donuts, to the bacon-topped sundays and bacon and nutella cones spawned by 2012’s bacon mania. Ice cream is everywhere, both in midway carts and in the Food Building, as are several variations on the theme of waffles. Many vendors offer desserts along with full meals (the Philippine Deli and Taste of India, for example), there are ethnically flavoured bakeries, and multiple purveyors of fudge. You can get a soft, strawberry-filled crepe (with lots of ice cream for an extra $1.75) from Swiss Waffles, Crepes and Pies, or combat your grease and calorie guilt at Vie, the champion of raw and vegan dining at the CNE. Although tiny (and $3.50 a piece!), Vie lime tarts are refreshing, flavourful, and almost too coconutty.

This is all just a sampling, of course. It would take days and an a hardy stomach (not to mention a sturdy bank account) to taste the fares of every vendor in the Food Building, and the selection changes every year. Even if you ate everything in sight, it’s likely there would still be little bit of deep-fried adventure in 2013’s CNE.

Nice i love this wow awesome. 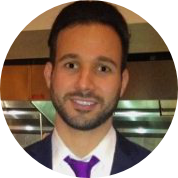