The education system in Canada has been well recognized for its high academic standards, affordability, innovative approach, and multiculturalism. Since the effective educational reform in 2000, Canada has become a world leader in quality of education. Canadian students have been achieving remarkable results despite their socioeconomic status, first language, or whether they are native Canadians or recent immigrants. Even though tuition costs have been increasing, loans have reached impassable levels and the unemployment rate for recent university graduates floats around 53 per cent, Canadians still recognize the importance of university education and are willing to invest in their studies. According to a recent study conducted by the Organization for Economic Cooperation and Development called Education at a Glance 2012 and a ranking compiled by 24/7 Wall St., Canada has the highest proportion of university-educated adult residents around the world.

The OECD’s study provides information on the percentage of residents who are between 25 and 64 years old with tertiary education for all of its 34 member countries, as well as for eight other countries. It also provides figures of educational attainment, graduation rates, GDP per capita, and unemployment rates from 2010 as well as the latest stats covering country-level education expenditure from 2009.

Canada: The Most Educated Country in the World Infographic

A Global Increase in Higher Education

Global education has undergone a rapid transformation accompanied by an explosive growth of higher education worldwide, increasing opportunities for millions and expanding the global talent pool of highly-educated individuals. The study writes: 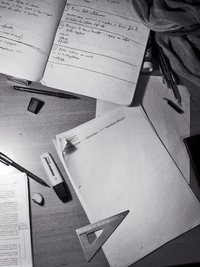 I should study by Effe effe

Even during the recession, university graduation rates continued to grow worldwide. Furthermore, more developed countries recorded an increase in the percentage of adults with the equivalent of a university degree reaching more than 30 per cent in 2010.

However, an increase in the percentage of adults with higher education is much harder to achieve in the most developed economies. Education rates in these countries have steadily grown but the increases have been modest compared to developing economies. For example, the United States has had one of the smallest annual growths for higher education at just above 1 per cent since 1997. On the other hand, Poland, an emerging market, recorded a 7.2 increase from 1997 to 2010.

The Organization for Economic Cooperation and Development’s study calculated the amount of residents with a university or university-equivalent degree among its member states and other major economies. The report proves that “the majority of countries that spend the most on education have the most educated populations.“ It’s not surprising that the best educated countries tend to spend the highest amounts of funds on tertiary education as a percentage of gross domestic product. The U.S. and Canada ranked first and third respectively in the proportion of tertiary education expenditures and gross domestic product. 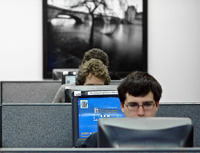 It’s more likely that a well-educated and well-trained person will find a job and earn sufficient funds for his or her own as well as his or her family’s life. According to the report, across OECD countries, men with tertiary education are 18 per cent more likely to get jobs and women are 32 per cent more likely. Moreover, people with higher levels of education tend to earn more. High-quality education was one of the main factors that helped people from all over the world maintain their employment during the recession. OECD explains:

Among the ten countries with the highest proportion of educated adults, unemployment rates for those with university equivalency ranged from 2.8 per cent in Australia to 5.4 per cent in Canada. However, in both countries, the rate hasn’t reached the country’s national average.

Matthias Rumpf, OECD’s Chief Media Officer, suggested in an interview with 24/7 Wall St. that the amount of investments in educational system significantly affects the overall number of residents pursuing higher education. The proportion of private spending on educational institutions to public expenditure is much larger in countries with the highest rates of university-equivalent education. It’s worth noting that a significant amount of funding comes from private sources, including tuition and donations in countries with the highest amounts of residents with tertiary education. The average proportion of private spending on education in the OECD is 16 per cent, while in the U.S. it’s 28 per cent and in South Korea it’s more than 40 per cent. 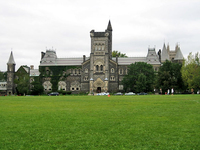 University of Toronto by rachel
in wonderland

Canada is the only country in which more than half of the adult population has completed university. In 2010, 51 per cent of all adult Canadians had completed a tertiary education, taking into account both undergraduate and graduate degrees. This represented an 11 per cent increase compared to 2000, when Canada dominated the ranking as well. It’s interesting that Canada has managed to become the world’s most educated country and at the same time ranked below the OECD average in education spending with just 6.1 per cent of GDP in 2009. A significant proportion of its spending was aimed to tertiary education, where Canada ranked third with 2.5 per cent of GDP beaten only by the U.S. and South Korea.

Moreover, Canadians can expect to undergo 17 years of education between the ages of 5 and 39, meeting the OECD average. This high level of education expectancy reflects Canada’s strong results in the educational attainment of its 25-to-34-year-old population. 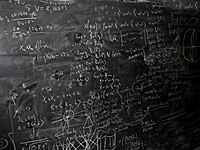 Not only is Canada the best country in the world concerning graduation rates, but it’s also a top-performing OECD country in literacy, maths, and sciences with the average student scoring 527 points in the OECD’s Programme for International Student Assessment (PISA) tests. This result is higher that the OECD average of 497, placing Canada as one of the strongest OECD countries for students‘ skills. According to PISA examinations, the gap between female and male students in Canada was 6 points, below the average OECD gap of 9 points.

Another important indicator of the educational system is the gap between the best and worst students. In Canada, the average difference in results between the top 20 per cent and the bottom 20 per cent is 75 points — considerably lower than the OECD average of 99 points. This indicates that the educational system in Canada manages to provide relatively equal access to high-quality education to all students.

On the other hand, Canada didn’t perform very well in attracting international students, who comprised only 6.6 per cent of all tertiary students. This result was lower that the OECD average of 8 per cent.

One thought on “Canada: The Most Educated Country in the World”

,,Interesting numbers. The United States should look up to their northern friends. But after all, America has more pressing things to deal with.”