It’s a joy to spend spring in Toronto. After the harsh winter, we all love to see the city come back to life with temperatures getting milder, luring Torontonians out of their homes and back to the streets and parks. Today, we prepared a short list of tips for spring events that will keep you active during the spring season. Whether you wish to attend one of the arts festivals, reflect on Ray Bradbury’s message at the Public Library or join a tree planting initiative, you certainly won’t be bored in the city.

For 26 years, the Images Festival has been introducing the best of Canadian and international contemporary media art to audiences in Toronto. The organizers have always tried to focus on the most innovative and independent works and provide plenty of opportunities for young media artists to showcase their ideas and make their way through to the arts scene. The festival consists of several sections such as film and video screenings, live performances, and media art installations. Ticket prices vary, and the festival is scattered around several partner venues in the city. 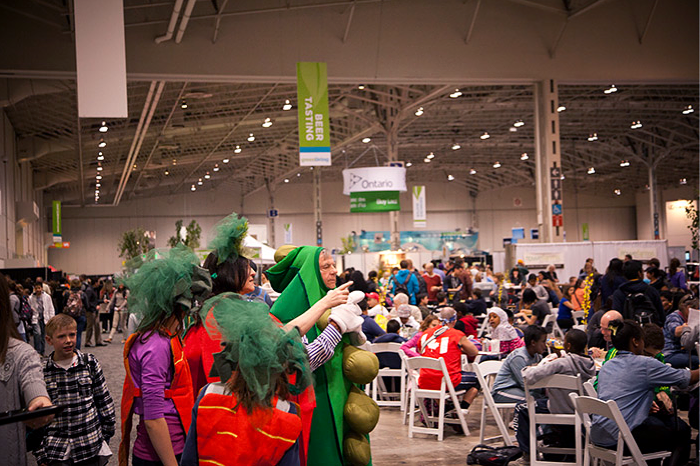 Spring is associated with everything going green and lively, and Torontonians shouldn’t be kept back from this vibrant energy! Visit the0 Direct Energy Centre and check out one of the greatest exhibitions devoted to green living in North America. Shop for thousands of ecological products and services, learn about the newest tips and tricks for your kitchen, home, and garden, take part in yoga workshops, or meet celebrities and eco-movement icons at one of the numerous live onstage presentations. Kids can look forward to a special EcoKids zone full of games, workshops, and sustainable toys, and parents will surely enjoy the opportunity to test-drive an electric vehicle or take a look at Canada’s top green car. Tickets cost $16.00 for adults and $12 for students and seniors, while children under 12 accompanied by an adult can enter free of charge. You can also receive free admission by recycling electronic waste at the show.

Trees Across Toronto is a unique event that originated in Toronto as an attempt to boost the city’s native tree and shrub planting program. The idea of the initiative is simple: once a year, volunteers devote their day to planting new trees and shrubs on one of the underdeveloped and un-treed areas in the city. In 2013, the organizers have decided to use Trees Across Toronto to revitalize Milliken Park and Windsfield Park and help the growth of Toronto’s urban forest. All planting materials and tools as well as refreshments are provided by Urban Forestry staff. Last year, more than 1,500 volunteers planted about 2,000 trees during a single day of work. Can we beat the record?

Join the Toronto Spring Sprint and help both brain tumour patients and your body. The Brain Tumour Foundation organizes this fundraiser all around Canada to support people suffering from brain tumours as well as survivors. Participants are free to choose whether they want to walk, run, or stroll on a 2.5- or five-kilometre trail in Sunnybrook Park. Onsite registration starts at 9:00 AM, and the run itself takes place at 10:00 AM. All the individuals and teams can donate either by themselves or by finding sponsors to support their challenge. This year, a special virtual Spring Sprint will also be open for all those who can’t make it to the live run. Lace up and get a little exercise for a good cause!

Here’s something for all literature lovers: the Keep Toronto Reading festival events organized by the Toronto Public Library will keep you busy throughout April. This year’s celebration of books and readings will honour the legacy of Ray Bradbury and his famous book Fahrenheit 451, which should remind us how a society without reading and literature would look. Festival organizers quote Bradbury to communicate the message of Keep Toronto Reading 2013: “There is more than one way to burn a book. And the world is full of people running about with lit matches.” Join the resistance with other Torontonians and attend discussions, film screenings, and public readings at the library to let your imagination run free with the book of the month by Bradbury. All events are free of charge.

Tired of dull comedies or bloody action films at the cinema? Looking for something more… real? Hot Docs are the right event for you. The largest documentary film festival in North America celebrates its 20th year with more than 250 films from 43 countries. This year’s season will be opened by The Manor, an eye-opening story of a family running a strip club in Canada. As always, there are several venues participating in the festival, so visitors can choose which cinema they prefer to visit. Tickets cost $15 per screening, but there are special pass offers.

If you are a true comic connoisseur, you will be delighted by the Toronto Comic Arts Festival. The organizers promise that the event is far from a comic or anime convention and focuses on comics as an art form instead. The festival program celebrates comics and graphic novels and their authors by featuring readings, workshops, a gallery section, interviews, and panel discussions with comic creators throughout the week. Artists who have already confirmed their appearance include such stars of the comic world as Bryan Lee O’Malley, author of the Scott Pilgrim series, and Art Spiegelman, who was awarded a Pulitzer Prize for his famous story Maus. The Toronto Public Library declared its support for the festival, as it’s held at the Toronto Reference Library building. All events are free of charge.

More than 150 buildings and sites of architectural, historical, cultural, or social significance will open their doors for public visitors during the 14th annual Doors Open Toronto. Take your chance to peek behind the doors of many buildings that are usually closed to the public and enjoy their spectacular architectural designs. The theme of Doors Open 2013 is “Creators, Makers and Innovators” and the festival focuses especially on older buildings that have been successfully redesigned or re-invented to reach the pinnacle of 21st-century living, working, or relaxing. All buildings can be entered for free, but make sure to check the tour times before hitting up the place you wish to visit to avoid unpleasant surprises.

Any other must-attend events for Spring in Toronto? Let us know in the comments!