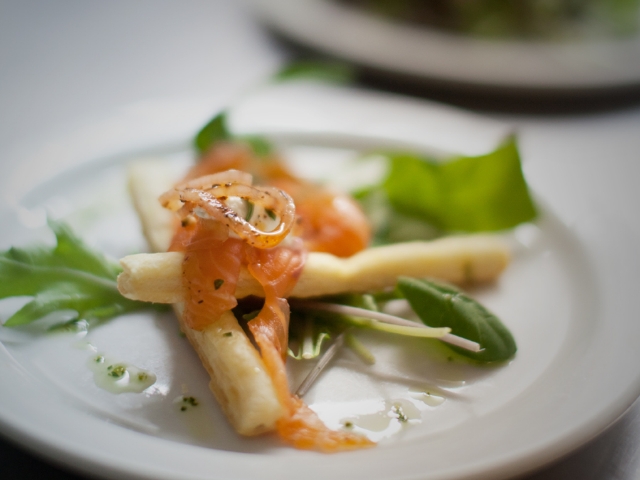 Following our exploration of the world's most creative restaurant designs, we hone in on the rich and varied dining experiences available in Canada. The world's second largest country (geographically), Canada is also a rich tapestry of cultural and historical traditions. After stepping onto Canadian soil, you have the chance to retreat into the rural oases of the Rocky Mountains of the West Coast and the Prairies, experience the electric energy of world class cities like Vancouver and Toronto, or travel a few centuries back in time with a visit to historically important settlements on the East Coast.

If your travels across the great nation should cause a rumble in your belly, Canadian restauranteurs have that covered too. Step into any one of the matchless dining establishments listed below and you’re guaranteed to emerge with an experience you might not have expected but definitively won’t forget.

Eye-popping views and unique dining experiences dot the path from coast to coast.

According to its official website, answers to the question “what if?” have consistently guided the creators of the Old Country Market in their quest to design a unique and successful dining experience.

In 1973, Kris and Solveig Graaten, Norwegian emigrants to Vancouver Island, asked, “What if we started a fruit stand beside the highway?” A year later, their question was,“What if we sold hamburgers to travellers en route to the West Coast?” Then, in 1976, they asked a final question, the answer to which would inform the creation of their nationally renowned West Coast eatery: “What if we built a market?”

A market was indeed built, and Kris was inspired to add a sod roof to the establishment, as many Norwegian homes and farm structures are built directly into hillsides, with the sod roof eventually becoming an extension of the hillside. 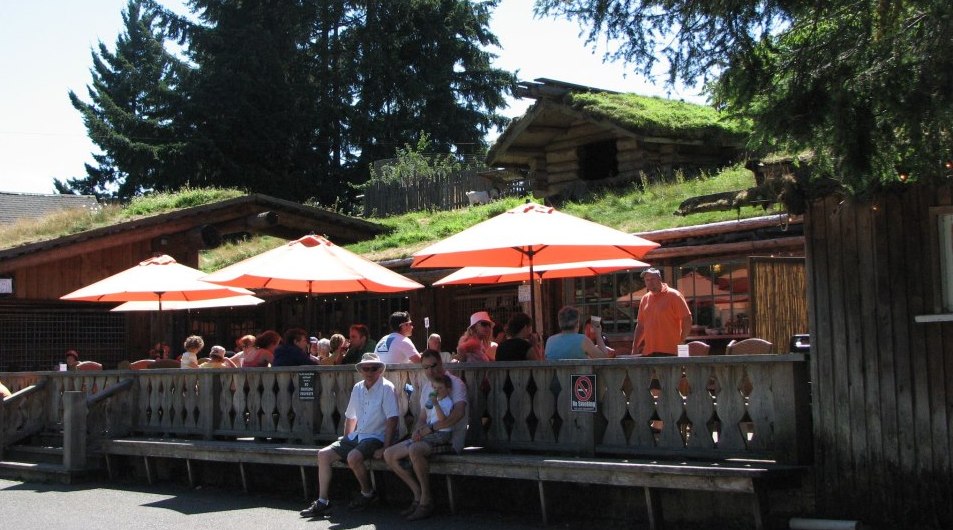 Can you see the goats?

Soon, the weekend of the Coombs Fall Fair rolled around and Kris’s son in law, Larry, drunkenly suggested that goats be charged with the task of tending the roof’s unruly grass.  His idea stuck. Goats were welcomed as the newest members of the Old Country Market family that very weekend and have since become permanent tenants of the roof, delighting local, national, and international visitors.

In addition to providing the goats with a wonderful habitat, the roof has several other environmental benefits. The grass effectively insulates the market in cold weather and promotes the evaporation of excess moisture, which has a cooling effect in the summer. 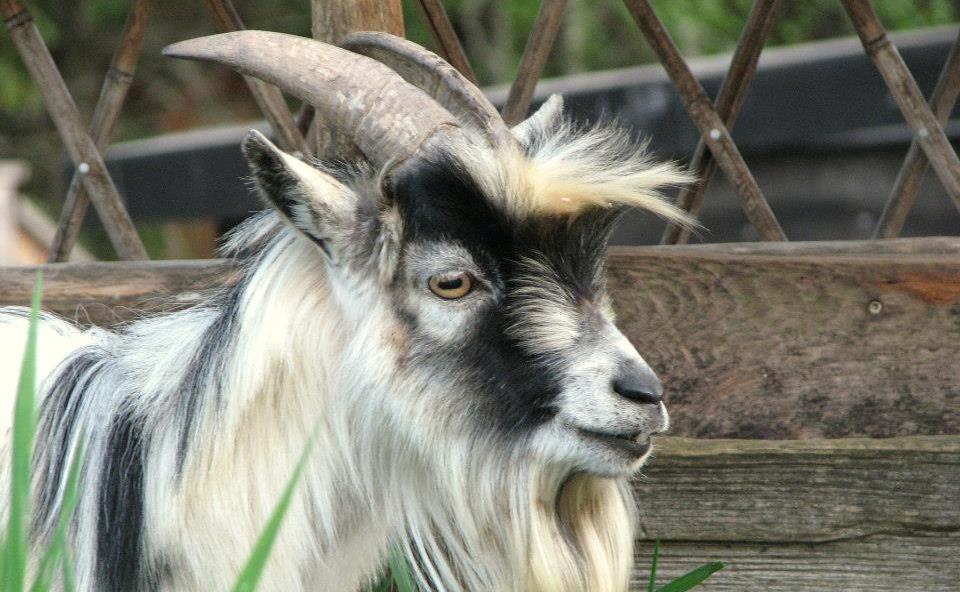 Goats have  a nice view we had up on the roof. 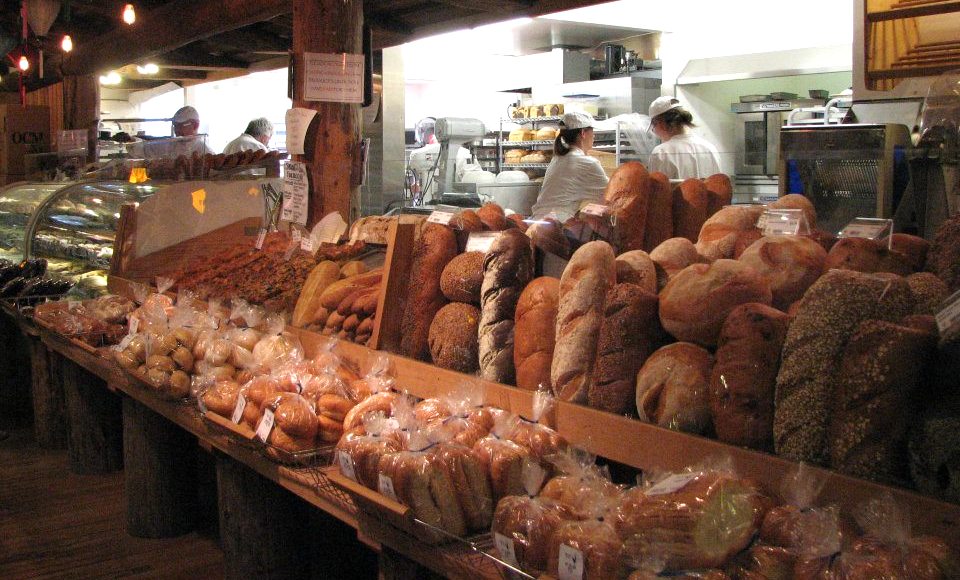 Grab a yummy loaf or two for the picnic basket!

As for food, guests can browse the market for ice cream, fresh sandwiches, pizza, baked goods, and other desserts.

Banff’s most famous fondue restaurant has come a long way from its beginning as Canada’s first Western disco, widely recognized for its touring bands and spirited go-go dancers. Back then, Chinese food was delivered through a literal hole in the wall, but the Grizzly House had to find a way to up its game once the Chinese restaurant closed and liquor laws required the House’s owners to serve food if they wanted to continue serving alcohol.

The staff soon cooked up the idea of bringing their own fondue pots to the restaurant, and a rich dining tradition soon sprang up in place of disco. But guests can still feel the legacy of the Grizzly House’s funky past in the steady stream of ‘70s music floating from the speakers, the working telephones at every table, and perhaps most strikingly of all, the glittering disco ball hanging proudly from the ceiling. 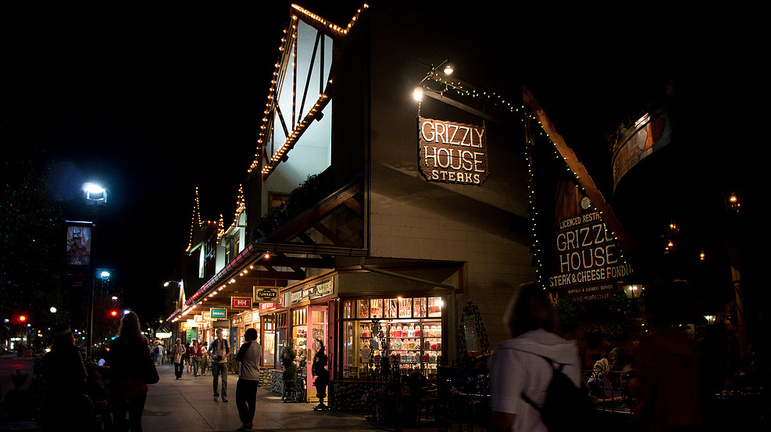 Nowadays, the restaurant’s décor is better suited to its wild surroundings. Wood-panelled floors, a wood-carved bear, totem poles, bearskin rugs, and a buffalo head decorate the dining room. The dishes on the menu are equally wild. Guests must cook the plethora of game they can choose for their entrée themselves! 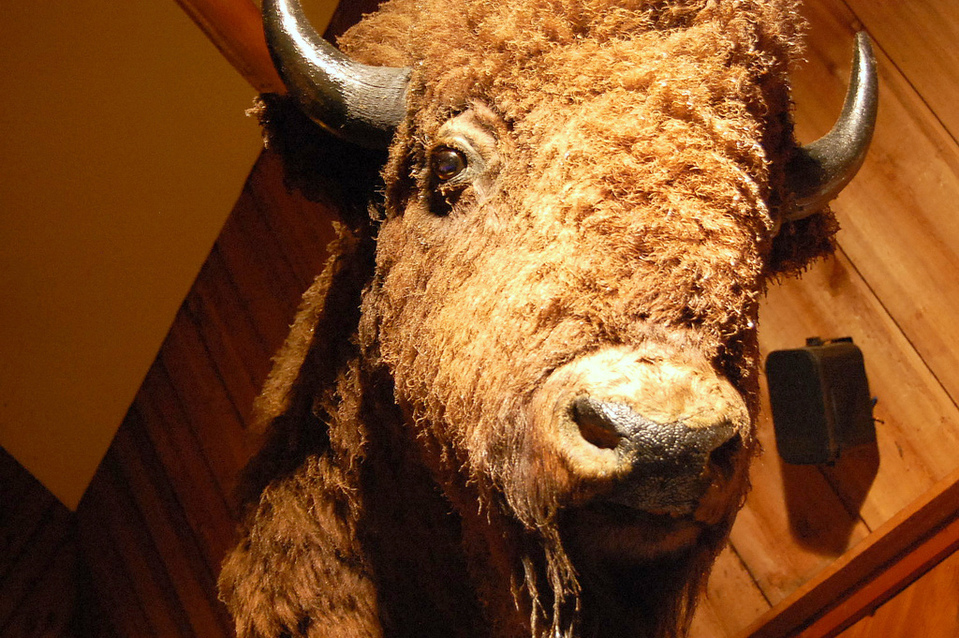 Hot rock selections include cow, buffalo, chicken, rattlesnake, lobster, and shark meat. Guests of more conservative tastes may feast on chocolate or cheese fondue. But all guests — regardless of their meal choice — should be prepared for the experience of a lifetime. As owner Peter Steiner explains, “It’s not fine dining — it’s fun dining.”

This restaurant has a unique method of encouraging its guests to fully savour the scents and tastes of their meal. After briefly unwinding in a cosy, film noir inspired lounge, guests are led by members of a blind wait staff into the pitch-black dining area. For a short period, they experience conversation, food, and drink without their sense of sight!

It's better in the dark!

Flashlights, matches, cell phones, cigarette lighters, and luminous watches are all banned from the dining room so it can maintain complete darkness at all times. As O’Noir founder Moe Alameddine explains,

When you eat food in the dark, your remaining senses are heightened to savour the smell and taste of food. Even simple, everyday dishes like potatoes and yogurt take on a culinary flair.

Guests not only gain a better appreciation for their food, but also temporarily experience what it’s like to be blind. This aspect of the restaurant is inspired by the work of Jorge Spielmann, a blind pastor living in Zurich. Spielmann would regularly blindfold his dinner guests so they could partake in his eating experience, and in 1999, he opened the first “dining in the dark” restaurant in Germany with the intention of educating the sighted about the world of the sightless and providing jobs for the blind. 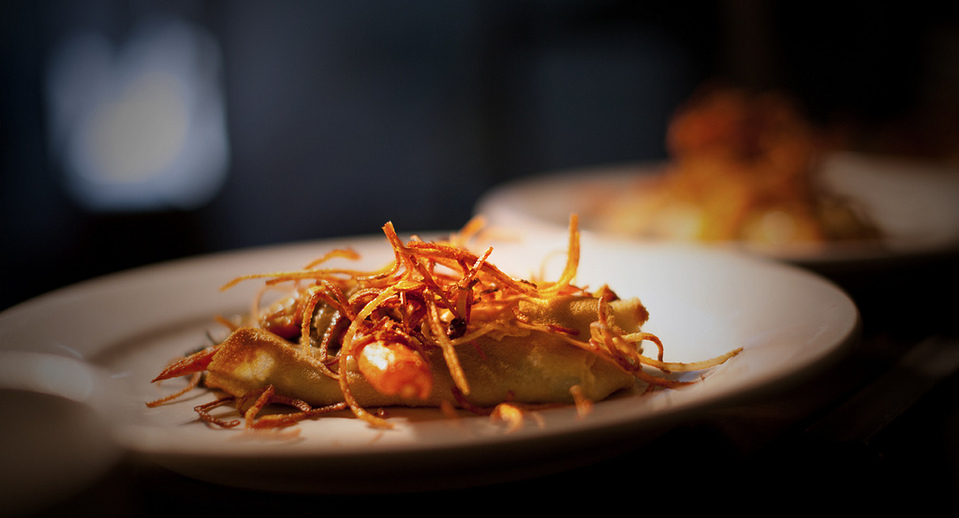 O’Noir’s menu is varied. Starters include grilled octopus and calamari, arugula salad with fresh mushrooms, and grilled portobello mushrooms with parmigiano-reggiano cheese and balsamic vinegar. Main course options include filet mignon and pasta with tomato sauce, while the dessert menu is rounded out by fruit sorbet, chocolate cake, and dark chocolate mousse with a raspberry round.

If you’re the kind of guest who prefers a quiet, inviting, and peaceful dining experience, you might consider spending the evening under the vaulted ceiling and dim lights of a deconsecrated church.

Not unexpectedly, The Church prides itself on providing guests with a regal atmosphere, courtesy of the structure’s grand ceilings, intricate woodwork, expansive stained glassed windows, and striking chandeliers — each of which emit the soft glow commonly associated with a place of worship. Also, the restaurant’s dark wooden furniture complements the wooden trusses that adorn the restaurant’s interior, many of which have their original Victorian finish. 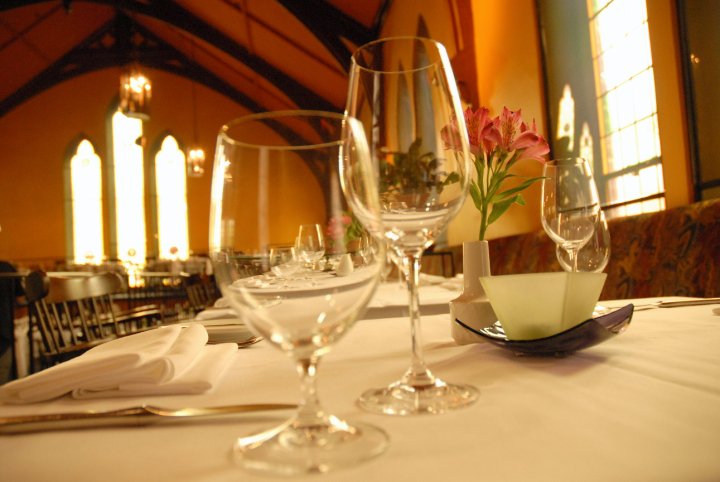 Formerly the Mackenzie Memorial Gospel Church, parts of the structure were adapted in 1975 to accommodate the necessities of a restaurant. A former crawl space was converted into a commercial kitchen, while the pews were used to create seating areas along the perimeter of the dining room. 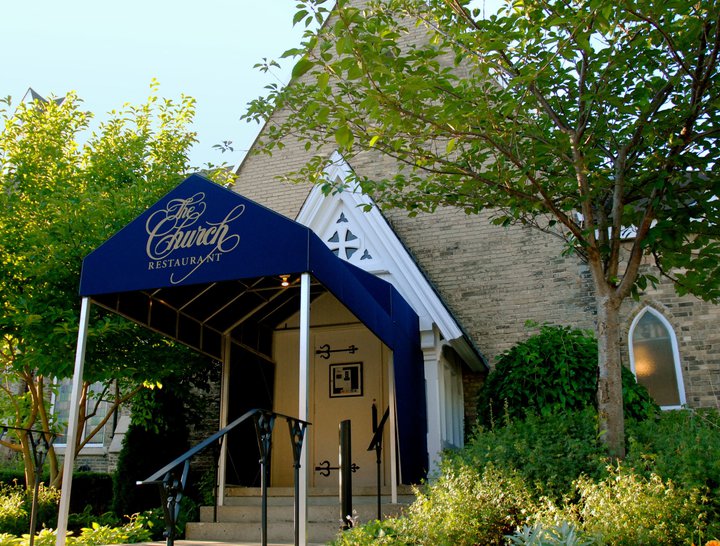 Historical records reveal that the Vikings were the first Europeans to land on Canadian soil around 1000 AD — long before Christopher Columbus arrived at the Americas and French and English colonizers began to claim portions of what's now Canada for their respective countries.

According to legend, Leif Ericson, a Norse explorer, was the first European to arrive in the New World. Sailing west from Greenland, his boat landed upon slabs of glacier and rock believed to be present-day Baffin Island in the Canadian Arctic. Sailing southeast for a few days, Ericson and his crew eventually happened upon a rich mainland where they erected temporary shelters. 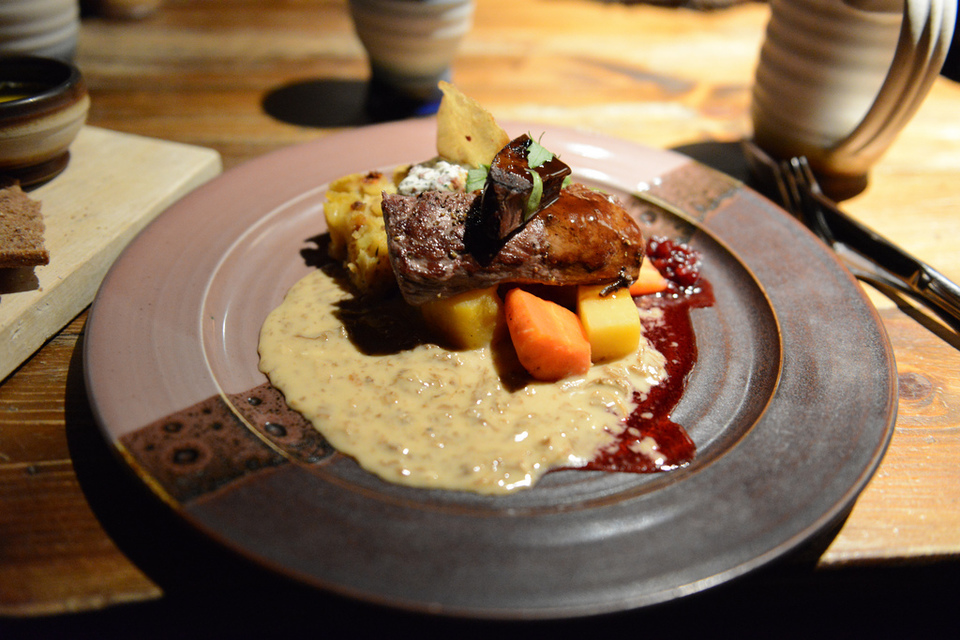 Ericson christened the land "Vinland," which could mean "Wineland" or "Pastureland." We now know Leif's Vinland to be L'Anse aux Meadows in Newfoundland. Erickson’s home in the area has been designated a National Historic Site by the Canadian government and serves as the inspiration for the Great Viking Feast Dinner Theatre.

Tour groups and members of the general public are invited to experience a slice of Viking life through dramatic re-enactments performed by the impeccably dressed wait staff of this themed eatery. 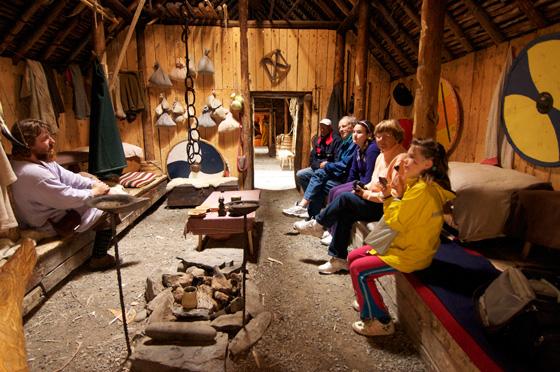 One thought on “Canada’s Most Creative Restaurants”