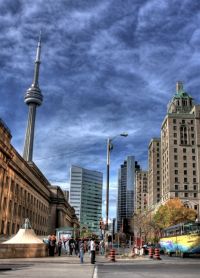 Toronto and the CN Tower
by Duane Storey

The Greater Toronto Realtors released statistics for sales and prices during the first two weeks of this month. The recorded 4,444 sales in the past fortnight is a decent result, despite the fact that last year’s numbers for this period were 3 per cent higher. The record was not broken, however. According to the Toronto Real Estate Board (TREB) president Bill Johnston, “If this level of activity is sustained for the remainder of the month, we could see April transactions close to last year´s record result”.

A more noticeable shift was reported in the average selling prices of houses in the GTA. The 12 per cent rise in prices is a result of the low number of houses listed for sale being highly exceeded by the number of people willing to buy one. A very disappointing fact for buyers is that prices have accelerated from last year’s average of $430,271 to this year’s $483,165.

Hopefully, the market will be able to cope with this unpleasant situation. If the high prices attract more sellers, the gap between supply and demand will eventually shrink and the rise in prices will slow down.