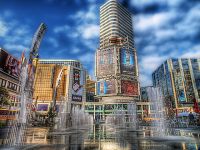 According to the magazine, only three cities from the North American category outrank Toronto: New York, Chicago, and Houston. There are several key factors of Toronto’s success, such as quality of life, economic expectations and opportunities, well-developed infrastructure, and marketing strategy.

The fourth place in the ranking of “large cities of the future” went to Mississauga. The main advantages of Mississauga are its economic development and infrastructure, according to the survey.

Ranking this highly in a competition of 405 cities throughout the Americas is a great result for our region. It is a great incentive for our cities to strive to be even better in the future.

2 thoughts on “Toronto and Mississauga – Cities of the Future”

Mississauga? City of the Future? Cars and more cars and sprawl housing is futuristic? An April 1st post this is.

The 2011 survey which I’m referring to in this post is stating that “the main advantages of Mississauga are its economic development and infrastructure”. Naturally, that means also more cars and more houses built – evidence that the survey got it right and Toronto and Mississauga deserve to rank high in surveys like this.

Thanks for stopping by!