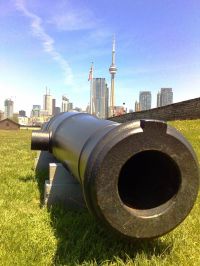 Work on a $23 million pedestrian bridge to Fort York has been stopped by the Toronto City Council´s public works committee, which considers it too expensive. It is very surprising news, after $1.3 million and three years of planning were spent on the project.

The bridge was supposed to be a landmark and the hearth of local areas with its breathtaking, twisting double helix design. The original plan was to erect the bridge just in time for next year´s War of 1812 bicentennial celebrations. Supporters consider the bridge a key waterfront revitalization project and a great connection between the historic fort and local parks. Another major advantage of the bridge was to be stimulation of local businesses. However, none of these benefits will come to fruition, mainly due to the criticized high price of the project.

Even though the project itself is included in the 2011 budget, the public works and infrastructure committee decided to withhold its approval. According to Councillor David Shiner, the bridge is very beautiful, but far too expensive for the city: “The only way to fund it would be to cancel two other much needed bridge rehabilitation projects.” After a very long meeting on Tuesday, Councillor Shiner suggested a motion to ask staff to find a less expensive alternative.

The budget of the bridge has increased from the initial $18 million to $23 million. Despite the fact that $1.3 million has already been spent on the project, the staff must reconsider the entire project with a considerably lower budget.

Many critics of Councillor Shiner say that it is impossible to build any redesigned bridge for the 1812 celebrations and that the obstructions might eventually destroy the bridge altogether.