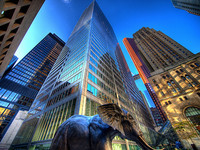 Pricewaterhouse Coopers released its annual “Cities of Opportunity” report this week. Toronto’s second place is an outstanding result, as the only city that ranked higher was New York. Toronto defeated traditionally strong cities, including London, Tokyo, Hong Kong, and Paris.

The PWC ranking is very prestigious and evaluates a wider scale of aspects than other city rankings. Not only does it take into consideration the city’s economy, but it also accounts for many livability characteristics, such as the city’s size, safety and housing costs, research and development, and education.

Three other cities made it to the top five: San Francisco, Stockholm, and Sydney. Even though the cities from the top ten are spred across four continents, they have many common features, including: considerable economic infrastructure and networks, strong commercial protection, well-working educational systems and cultural foundations, a variety of civic organizations, and adequate social security.

According to the PWC rating, Toronto excels in lifestyle-oriented indicators, such as air quality and health — not to mention more common economic factors, like the ease of doing business. The city occupies the fifth position in the category of “lowest cost cities,” which consists of the total tax rate, cost of business occupancy, cost of living, and other similar factors.

Surprisingly, the city’s worst feature is its transportation. Toronto finished third last in terms of cost of public transportation, and ranked in the middle of the pack for mass transit coverage.

Nevertheless, grabbing second place overall in the competition of 26 different cities considered major business and financial hubs is a magnificent result for Toronto. However, the rating states that Toronto is still a beta city a bit behind the great cosmopolitan centres like New York, London, Paris, and Tokyo.