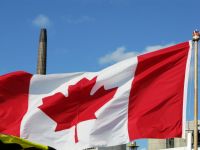 Statistics Canada published unexpected news on Friday: Canada´s economy shrank in February. This is the most abrupt decline since May 2009. The main reason for these alarming numbers is a slowdown in manufacturing and wholesale trade.

The gross domestic product fell by 0.2% following decent growth during the prior three months. The figures from these three months show a 0.4% GDP growth in November and December 2010, and a 0.5% rise in January. The sudden downfall is the first since September. From the first quarter GDP figures, one might presume that the output will not reach the Bank of Canada´s latest forecast of 4.2% growth. According to Derek Holt, vice president of economics at Scotia Capital, the Canadian GDP would need to enlarge 0.3% month-over-month in March to meet the Bank of Canada´s forecast.

The current unfavourable conditions may be associated with the recent sharp drop of the U.S. GDP from the +3.1% of the last three months of 2010 to only +1.8% in the first quarter of this year.

A huge 2.5% rise in the manufacturing sector in January was followed by a serious blow. A large downfall in the motor vehicles and parts (-7.5%), machinery (-3.3%) and fabricated metal products (-2.7%) industries resulted in a 1.6% decline in manufacturing activity overall. There are two key aspects of the downfall in the auto industry sales: rising trends in gasoline prices and tsunami-caused obstructions influencing parts distribution to Japanese assemblers. Despite the fact that the output of copper, nickel, and zinc have risen, the goods production overall was dragged down -0.6%, mainly due to the manufacturing sector.

Only service producing industries maintained their previous numbers, as there was a balance between the slowdown of wholesale trade and transportation services and increases in retail trade and professional and financial services. Figures for the finance and insurance sector rose by 0.2%.