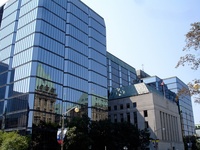 Bank of Canada by daryl mitchell

A year ago, The Bank of Canada surprised markets when it hiked the record-low 0.25% interest rate three times in a three-month period (in June 2010 to 0.5%, in July to 0.75%, and in early September to 1.0%). After doubling the rate, no hike occurred until now. Some say this was because of the elections (who would hit the brakes before the finish line?), but most experts believe the Bank is just being cautions not to choke the recovery, which is still considered fragile — especially after the earthquake in Japan. The Bank of Canada slashed growth predictions and Governor Mark Carney admits he is in no rush to hike the rate.

He has reasons for such an attitude. The robust economic rebound is gone and we can expect only moderate growth in the coming months. Fiscal stimulus is being withdrawn, and if Harper wants to meet his fiscal stability promises, there will be less government spending. The record-strong looney helps us to buy cheaper goods when we cross the border, but hurts our exporters. This is a double hit, because not only is our currency strong, but also the United States, our most important business partner (accounting for 75% of our exports), is very weak and will not recover soon from its public finance collapsing.

Still, OECD advises Canada to raise its interest rate soon in the recent Economic Forecast Summary. The reason is clear: inflation. Currently at 3.3%, it is far above the 2% target set by Bank of Canada. While the hike will probably not happen on May 31 (when the next rate announcement by BoC is scheduled), it should happen soon, or we will smoothly step into another inflation bubble.

OECD believes the neutral interest rate for Canada hovers somewhere above 4%. Considering this number, the current 1% level is still extremely low. If you look at the average mortgage rate in the last 20 years, you will notice that 3-year rates have usually been between 5% and 7%, while today, you’ve been able to shop for 3-year mortgages below 4% since early 2009.

This resulted in price boosts, especially in big cities, and despite lower mortgage rates, overall affordability worsened in the last 12 years. The average property price on the Toronto real estate market almost doubled during the last 10 years, and Canadian household debt is among the highest among developed countries. Luckily, real estate is still considered fairly affordable, with home ownership costs taking around 40% of a household’s disposable income.

The BoC interest rate will go up this year, as will mortgage rates. Some banks already announced minor hikes during the spring. This will help to further moderate price growth on the real estate market. Higher mortgage rates mean higher monthly payments, but slower-paced price growth will help to keep homes affordable in Canada.

2 thoughts on “Will mortgage rates go up soon?”

Saved as a favorite, I love your blog! 🙂

Thank you very much. I am trying to keep it relevant and interesting.