Whether you like it or not, most prices go up constantly. This is called inflation, and there is nothing any one person can do about it. With the prices of the condominiums we’re listing here, though, inflation will be the least of your concerns. See for yourself!

Yes, that is twenty-eight million Canadian dollars that an international buyer paid for a 9,038 square foot residence on the 55th floor in the middle of Toronto that hasn’t even been finished yet, as reported by BuzzBuzzHome.com.

If you were wondering, most of us would have to quit eating and paying rent/mortgage to be able to afford one square foot of this glassy beauty per month. That’s because each square foot costs just above $3,000. And if you managed to wait it out starving and cold, you would finally pay the entire apartment up in a mere 753 years. But wait, that does NOT account for the inflation we mentioned! Whoops…

This condo is a part of the Four Seasons Hotel and Private Residences development project at the northeast corner of Bay Street and Yorkville Avenue. Grab an ice-cream cone and go check it out.

(We did our homework and found an affordable solution for you if you don’t want to give up food and your current roof while you wait. You could start buying up cubic feet instead of square feet. One cubic foot would then cost you a mere $258, seeing as the residence has 12-foot ceilings. That is a much better deal, if you can live long enough to enjoy the prestige when you are 9,070 years old.) 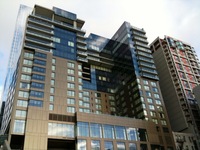 The Four Seasons seems to have a knack for selling the most expensive condos in the world. They ranked first in 2009 with an $11.3m unit in Seattle, following a similar sale in the same complex in 2008.

Another penthouse that did not find its way to the condo MLS was a $12m condo, also in Seattle. Los Angeles does not seem to lag behind. In fact, new condominium projects were selling in L.A. from anywhere between $4 million to $14 million as recently as 2006.

Very few units in general sell through the MLS that are over $5 million. This is because developers try to attract buyers directly and very early in the process. They simply want to make sure that they sell most of their inventory (or at least break even) before they as much as start laying the first bricks. Okay, there are no bricks — but you get the point. 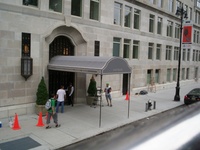 New York would be the first place to look for outrageously expensive dwellings, right next to London, Moscow, Tokyo, and Shanghai. But don’t worry, if you have the money, you can easily find luxurious residences in any part of the world.

But back to New York: if you have a spare $480,000 every year, you could be a tenant of one of the condos on the 35th floor of 15 Central Park West. That’s just $40,000 a month. Yes, that’s just $40,000 a month, and you can live right between Broadway and Central Park! But why rent when you can own? Steel magnate Leroy Schecter, the owner of these units and likely the most affluent landlord you can imagine, has tried to sell these little condos for $55 million in 2010. I bet he was tired of knocking on his tenants’ doors every month and carrying the piles of cash to the bank in a rucksack. Well, he doesn’t really need those condos anyway, seeing as he lives in a cozy and warm mansion in Florida.

If you’re an adventurous soul, you could buy something that the New York edition of Curbed calls a $30 million fixer-upper on Park Avenue. This is an 80-year-old apartment that looks wonderful but has a small catch: half of it needs complete furnishing and remodelling. As I incessantly tell my clients, be sure to have the extra follow-up cash when you are buying a fixer-upper like this!

The only prestigious condo building complex that did not make it to our list today is Elliot Bay Towers in Seattle. Since it is the home of Dr. Frasier Crane of the famous sitcom, the towers are as fictional as the rest of the show’s whereabouts. Sorry.

Before I embark on another exploratory quest for real estate outliers, why don’t you tell me in the comments the whereabouts of the richest condo whose owners you know?

2 thoughts on “The Most Expensive Condo in Toronto”

As a Newbie, I am continuously searching online for articles that can benefit me. Thank you

Welcome to my site. I am happy to see that you are gaining value from the information that you have come accross on my site. Please feel free to email me directly at mail@jamiesarner.com if you have any questions that you are not finding posts for currently. There is a lot to learn when you starting to learn about buying & selling properties and I would be happy to help you.