The pace of new home construction in Canada was surprisingly strong in the first half of 2011. This trend continued in June, when housing starts increased by 1.7 per cent to 197,400 annualized units, as reported by the Canada Mortgage and Housing Corporation. This was the highest boost in construction activity since July 2010. Ontario was the leader of new home construction, as there was an enormous 24.1 per cent rise in construction activity for new apartments and condos. However, economists are expecting that this activity won’t survive much longer.

Rober Kavcic, a BMO Capital Markets economist, suggested that the main factors of the significant growth in construction activity are steady, strong demand for new homes and high home prices, which stimulate builders to construct more homes. Nevertheless, he says that this situation could easily change. According to him, demand in the housing market will moderate if interest rates increase in the fall. 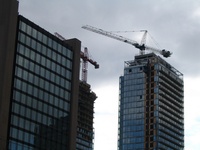 To The Skies by Loozrboy

Cities like Toronto are packed with cranes and new construction sites since housing market prices remain excessively high and attractive for builders. Home construction in Ontario rose by 24.1 per cent in June to 69,000 unit starts. The Atlantic region also showed a decent 5.6 per cent growth to 9,500 urban starts. However, economists predict that the decreasing trend in the resale housing market will also spread into homebuilding. The main causes of this slowdown, high home prices and the rising interest rate, could eventually make homeownership less affordable. Presumably, people won’t be able to afford new homes for such high prices and this will be reflected in the demand for new homes.

Furthermore, CHMC stated that the recent intensive pace of housing starts is unlikely to last. As CHMC chief of economics Bob Dugan says: “The revised numbers show that housing starts have been above their trend line since March. However, we expect housing starts to move back towards levels consistent with demographic fundamentals in the near them.“

However, there are several regions in which the pace of housing starts have declined. Quebec fell by 3.6 per cent, and the Prairies recorded a 1.2 per cent downfall. The biggest drop was in British Columbia, where the housing market fell by 27.6 per cent to 21,200 units, mainly due to a robust rise in home prices. These negative numbers can be considered the first signs of the predicted slowdown. A similar scenario is also expected in other regions.