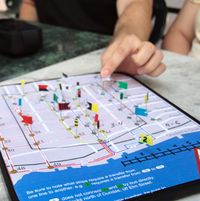 In the name of progress, the Toronto Real Estate Board (TREB) has been working hard to update and revamp the districts by which real estate agents and their clients search the MLS. The newly catalogued Greater Toronto MLS should be launched on July 5th, introducing unprecedented searching accuracy and improved ease of use.

For historical reasons, the existing zoning system was confusing for areas that became part of Toronto later or that changed considerably due to the progress and development of Canada’s largest city. And it’s no wonder, seeing as the Multiple Listing Service, commonly referred to as MLS, has been around for over 60 years.

The Toronto MLS itself has since grown to contain 86 districts denoted by alpha-numeric character combinations. This is a considerably number if you take into account the fact that these 86 districts classify the living space of over five million people. That’s nearly 60 thousand people per district on average, which is by no means detailed enough. What’s more, the original districts do not really conform with all the municipal regions as we know them today, making it difficult to limit the MLS search effectively to particular areas.

The new system promises to simplify the ease of searching the Toronto MLS by introducing existing regions and neighbourhoods into the search tool. Real estate agents and their clients will now be able to hand pick the exact areas where they want to look for houses, and the search result sets will not be bloated by unwanted matches. Moreover, any new neighbourhoods and city regions can easily be incorporated into the system using the new logic, making it easy to maintain the MLS in the future. We expect that the increased granularity will benefit all stakeholders in the property trading market.

If you’re interested in the technical details, the new system will provide a three-tier selection mechanism whereby every Toronto house and every Toronto condo will be classified within its own community or neighbourhood, which will be a part of a municipality, lying in turn within an area. If you’re familiar with the matter, you know that the city of Toronto itself is both an area and a municipality. In order to prevent Toronto from becoming a massive category of its own, TREB decided to retain (with minor adjustment in the name of modernity) the historical letter-number district names within the city. These will appear at the municipality level for searches in Toronto, allowing MLS users to focus on a preferred region. Even still, these districts will be broken down into neighbourhoods to fulfill the goal of greater searching precision and accuracy.

This is also a nostalgic moment for many of us who have grown used to the old system and can take pride in ourselves for a kind of MLS mastery. But we will not mourn for too long. Realtors® are awaiting this change eagerly, although it will surely take us some time to get used to the novelty. Please be patient with us! And in the meantime, please feel free to browse Jamie’s Toronto MLS listings and other goodies that Jamie and his team have in store for you on JamieSarner.com.

Please contact us if you have any questions about the new Greater Toronto MLS or leave us a comment here.