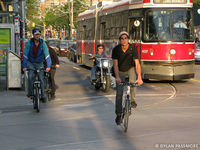 The Eglinton Crosstown Light Rail Transit project, worth C$4.5 billion, is one of the biggest transit projects in the history Toronto that should significantly improve the transit service in the city. New, electric light rail vehicles will replace the inefficient bus transit service on Eglinton Avenue. The 32.6 kilometre LRT line, which will run from Kennedy Station to Pearson International Airport, should provide a cost-effective, reliable, high-capacity, sustainable, modern, accessible, and comfortable LRT service.

The proposed plan of the Eglinton Crosstown LRT consists of three different sections. The first one is drawn from Pearson International Airport to Black Creek Drive. This west section is 14.6 kilometres long and includes a new bridge crossing Highway 401. The central underground section is 10.5 kilometres long and runs from Black Creek Drive to Brentcliffe Road. The last part of the 32.6 kilometre long LRT line operates between Brentcliffe Road and Kennedy Station. It also includes an underground section (from Don Mills Station) and measures 7.5 kilometre in length. The whole line contains 28 surface stops and 13 underground stations. The light rail transit will be supported by buses located at three locations: Keele Station, Caledonia Station, and Don Mills Station.

The environmental impact of the Eglinton Crosstown route is one of the main questions that need to be solved. The Toronto Transit Commission completed its Environmental Project Report in March 2010. The main concerns were about turn restrictions, pedestrian safety, traffic congestion, the preferred transit technology, the vertical alignment of the LRT route, and property, air quality, and noise impacts. The Ministry of the Environment reviewed this project and announced that it “will not have a negative impact on matters of provincial importance related to the natural environment or to a cultural heritage value of interest or have a negative impact on a constitutionally protected Aboriginal treaty or treaty right.“

The development of a new transit system in Toronto has many benefits. The construction of the new light rail transit will create more than 100,000 jobs in Ontario. Commuters will be able to get to work and home more quickly. Traffic congestion and greenhouse emissions will be significantly reduced. Moreover, an efficient and sustainable transit system is a key factor for the future growth of the city.

I was wondering what, and how much, you think the impact on the real estate market from the LRT will be, not only when it is finally completed and operational, but also during the construction phase. I live in Leaside, in a townhome, and from what I can tell over the past year or two the value of homes in my community has plateaued. The word on the street is that the value of my upgraded home is not expected to change in either direction ever again, but I feel like the possibility of an LRT stop so close by will have some impact on the value, as will the construction (regardless of whether it is above or below ground) when it is being built. So if you could include an answer specific to Leaside (the Brentcliffe area) I would very much appreciate it. Thanks!
Donna

I think that there is no question that the LRT will benefit the pricing of all properties that are within walking distance of the LRT. During construction there may be some reluctance to fight the traffic to view properties which I witnessed when they were changing the set-up of the streetcar tracks on St. Clair but once complete the prices should gain as a result.

With respect to your comment about prices plateauing and the price of your townhome not changing in the future I would say you have been misinformed. Properties and locations will forever be adjusting both on the upside and downside. I am not aware of any location that sees stagnant change when the rest of the world is changing around them. The fact that you live in Leaside means that you have seen tremendous gains in the last decade but this is true for many neighborhoods across Toronto. Property values will forever be changing. I hope this helps!

Hi Jamie, any substance to the rumor that the LRT could be built along Parkhurst Blvd instead of Eglinton in Leaside? Doesn’t make much sense but someone recently told me that this was an option being discussed. As a Parkhurst resident this concerns me. Any thoughts would be most appreciated.
Thanks so much,
Jonathon

This is the first I have heard about the LRT built along Parkhurst. That doesn’t mean that it is not a possibility so if you find out more please let me know and I will do the same.