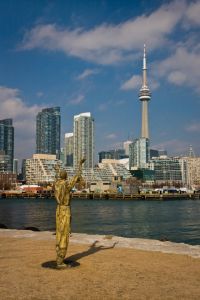 All Hail Toronto by Benson Kua

It’s a well known fact among homebuilders and developers that immigration has significant importance for economic growth, which also affects housing demand. Approximately 225,000 immigrants are accepted each year into Canada. This is a considerable factor that affects the economy in several important ways.

Immigrants compose a huge number of potential home buyers, and according to the Canadian Mortgage and Housing Corporation’s housing demand projection study, a 1 per cent increase in an immigration population leads to a 0.66 per cent increase in housing demand. Furthermore, the arrival of new immigrants to an area could also cause the housing supply to rise if there are expectations of higher demand.

Apparently, most of the new immigrants are tenants, but it’s very interesting that there are more and more new home owners among immigrants who have lived in Canada for several years. According to Frank Clayton, BILD’s economic advisor, the number of immigrants living in their own homes is growing quickly, from 17 per cent six months after arrival to 55 per cent four years after arrival.

A study called “Settling In: Newcomers in the Canadian Housing Market,“ conducted by University of British Columbia professors Daniel Hiebert and Pablo Mendez, estimates that over 28 per cent of all home sales between 2001 and 2008 were to immigrant households. This represents approximately 122,000 units, including about 40,000 newly built units. These high numbers show that immigration is a truly important factor in the housing market.