Every city is a unique entity with its own life, history, and future. Cities change their faces as time goes by. Old buildings are destroyed or demolished, and new buildings are erected. Toronto is a city that glows with life and freshness, but at the same time, Toronto boasts many historic buildings that shouldn’t be forgotten. Let’s stroll together through Toronto’s history and find some of the most beautiful architectural gems that were recklessly demolished during the 1960s and 1970s. 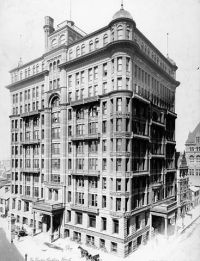 The Temple Building, built in 1895, was one of the first skyscrapers and the tallest building in Toronto upon its completion. It was one of Toronto’s most symbolic 19th-century office buildings, designed by a well-known and creative architect, George William Gouinlock. It was a perfect counterpart to nearby Old City Hall, which was also designed in the Richardsonian Romanesque style. The Temple Building was the perfect combination of grandiosity and elegant decoration. It stood at the northwest corner of Richmond and Bay until 1970, when it was demolished and replaced by a new 32-storey office tower. The Globe and Mail’s editorial on the demolition of the Temple Building, which was released in July 1970, perfectly captured the attitude towards this barbarism: “Want to see a monument destroyed? Go down to the corner of Bay and Richmond streets, and watch them make gravel of the Temple Building. It won´t go easily or prettily, because it wasn’t build with destruction in mind. It was intended to last like the pyramids. Will there be a headstone to mark where it stood?“

The Armouries Toronto
by Wikimedia Commons

In the last years of the 19th century, the federal government decided that they should organize the training of their new recruits and build a centralized facility for this purpose. Thomas Fuller designed the structure of this red-brick, Romanesque building which was finished in 1894. The opening day of the Armouries was a grand celebration including a Military Tournament since this was the largest armoury in Canada. Its medieval castle-like look only accentuated its prominence. The armoury trained Canadian soldiers during the Boer War as well as both World Wars I and II. It was located north of Queen Street on the east side of University Avenue. Although citizens assembled to save this military heritage structure, it was destroyed in 1963 to make room for the Provincial Court House. 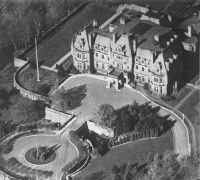 Chorley Park From the Air in circa
1930 by Wikimedia Commons

The fourth and final in a chain of Government houses, Chorley park was the official residence of the Lieutenant-Governor of Upper Canada and Ontario. It was designed by a provincial architect, Francis R. Heakes, in French Renaissance style, following the opulent patterns of the chateaux of the Loire Valley in France. The building, with its gardens and terraces, was situated on fourteen acres of isolated and undeveloped land in Toronto’s Rosedale neighbourhood. The building was closed in 1937 due to high maintenance costs. Afterward, the building was used as a hospital by the military, Red Cross, RCMP, and as a refugee camp. Unfortunately, this beautiful building met its very sad destiny and was demolished in 1960 to be replaced by parkland.