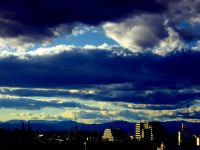 After Storm Passed
by Aube insanite

There have been many disputes about the effects of the weather on the housing market recently. Some experts declare that if there’s any connection between bad weather and real estate market activity, it’s irrelevant; however, many real estate agents claimed that unusual weather was one of the main factors that caused the stagnancy of the real estate market during certain periods. A recent survey by Royal LePage supports this theory.

According to Helen Adams, managing director of advice organization, FirstRungNow, the weather in winter 2010-11, which was worse than that in 2009-10, was unlikely to have a significant effect on the housing market in the UK. She mentioned that there are other factors such as mortgage availability that affect the real estate market much more significantly.

Weather probably isn’t the most important factor that influences the housing market; however, it plays a definite role that shouldn’t be underestimated. The Royal LePage survey shows that it makes a huge difference if you’re trying to sell a house during a snow storm or a beautiful sunny day. He explains:

Over 41 per cent of the 1,434 agents surveyed say they have noticed that the unusual weather patterns experienced over the past five years have affected housing market activity. If a region is experiencing a heat wave or an unusually long winter, sellers may be reluctant to list their homes and buyers may be less willing to get out into the market to look for a property.

Many real estate agents overlook the impact of the weather on the housing market and focus only on other “more significant“ factors. As Phil Soper, chief executive officer of Royal LePage Real Estate Services, suggests, “Severe weather, be it extreme heat, wet or cold can prolong or delay seasonal sales cycles by weeks or even months. "The report indicates that unpleasant weather might result in a short-term decline in demand, which could result in a change of home prices. However, there is no evidence that unusual weather can affect home prices in the long run.

The numbers show that 55 per cent of the real estate agents reviewed thought that severe weather actually influenced housing sales. Moreover, 22 per cent responded that weather played a major role, and 30 per cent admitted that weather plays such an important role that they often recommend their clients not to list their properties because of the outside influence of harsh weather.

Fortunately, the problem of selling properties during unfortunate weather can be solved, or at least reduced, during the preparation. It’s important not to forget these details and prepare the home that you’re trying to sell according to the season. For example, keep a home sufficiently heated, with all roads and parking accesible during the winter, or ensure that the place has sufficient air conditioning and that lawns and exterior plants aren’t too dry due to excessive heat during the summer.