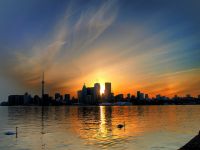 The Greater Toronto Area market recorded 20 per cent more sales in the first two weeks of October 2011 compared to the same period of 2010. New owners bought 3,477 homes. Nevertheless, with a 21% rise in new listings, the market is moving toward a more stabilized position, where buyers don’t compete so aggressively.

The average price reached $475,743 in October — a growth of 7.5 per cent. So far, 6,249 homeowners have decided to list their home for sale, expecting price growth moderation in 2012, which is supposed to keep at around 5 per cent.

“The first two weeks of October seem to be pointing towards more balanced market conditions as we move toward 2012. Growth in new listings outstripped growth in sales, meaning more choice for buyers,” said Toronto Real Estate Board President Richard Silver. “A growing number of home owners are reacting to the above average price growth reported this year and have decided to list their home for sale. They are confident they will receive timely offers in line with their asking prices.”