Toronto was struck by a condo boom that still maintains an alarmingly high pace. According to recent statistics, the city is constructing more high-rises than any other city in North America.

From CN Tower by Dhinakaran Gajavarathan

A German research company, Emporis (the world’s largest source of information on multi-storey buildings), recently released stats about high-rise buildings. A high-rise building is between 35 and 100 metres high, or 12 to 40 floors, according to Emporis. Buildings taller than that weren’t counted in the research as they are considered skyscrapers. The figures show that there are currently 132 high-rise buildings under construction in Toronto, leaving the second city, Mexico City (88), far behind. The third position belongs to New York City, where 86 high rise buildings are being erected. The top three is followed by a substantial downfall, as the fourth, Chicago, is constructing only 17 high-rises. The fifth city is Miami with 16.

This isn’t very good news for Torontonians who prefer low-rises. Toronto already has the second highest number of erected high-rises and skyscrapers in North America (1,875), followed closely by Chicago and Mexico City. However, they are all vastly outstripped by New York City, which has almost 6,000 high-rise buildings and skyscrapers.

This issue was discussed on Friday by the city’s economic development committee, which prepared a presentation on this matter including statistics from Emporis’ research.

Matthew Slutsky, founder and president of BuzzBuzzHome, which lists new residential projects in Canada, supposes that provincial and municipal land intensification policies like Ontario’s Greenbelt are the cause of a withdrawal from low-rise development in the city. He presumes that the increase in the construction of high-rises and skyscrapers along transit lines is a “fantastic“ alternative to extensively dispersed low-rises in suburban areas. “If you combine the construction with low-rises, the overall building is about average for Toronto.“ 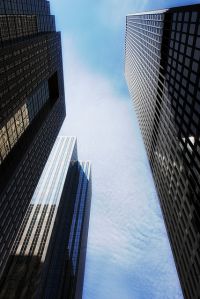 We have to consider the fact that Emporis’ figures do not differentiate between residential and office development. The numbers aren’t therefore absolutely precise as they don’t focus only on condos.

Nevertheless, high-rise units compose 60 per cent of all new home sales in the GTA, which represents a 35 per cent increase since the year 2000. George Carras, president of RealNet Canada Inc., mentioned in the Toronto Star that we’re witnessing a “tale of two housing markets, with low-rise in a substantial decline and high-rise in steady increase.“

Many market experts are worried about Toronto construction rising highly above demand despite Bank of Canada Governor Mark Carney’s alert of a possible condo price bubble back in June. However, some industry experts are fearing the opposite.

At the present time, there are over 39,000 condos being built in the region and 88 per cent of them are already sold, according to Ben Myers, executive vice-president of market research firm Urbanation), which tracks condo development in the city. Moreover, he claims that a further 118 buildings are in the pre-construction phase and three quarters of those are also sold. “We´re just continually getting larger and larger and larger,“ he says.