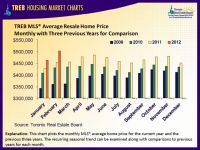 The first two months of 2012 have shown that strongly growing competition between buyers is pushing the average selling price higher. Toronto Real Estate Board president Richard Silver pointed out that this trend won’t change until the market becomes better supplied.

“It is important to note that both buyers and sellers are aware of current market conditions. This is evidenced by the fact that homes sold, on average, for 99 per cent of the asking price in February,” continued Silver.

The average selling price through the Toronto MLS® in February 2012 recorded an eleven per cent year-over-year increase, settling at $502,508. Moreover, the Composite MLS® Home Price Index for TREB, which provides a more stable measure of price growth compared to the average price, showed a 7.3 per cent increase compared to February of last year.

If these tight market conditions continue to push prices even higher than expected as we move into the spring, expectations for 2012 as a whole will have to be revised upwards. Jason Mercer, TREB’s Senior Manager of Market Analysis, adds that “while price growth remains strong, the average selling price remains affordable from a mortgage lending perspective for a household earning the average income in the GTA.“