Toronto Up by Shayne Kaye

Figures of Statistics Canada released this Friday reported a surprisingly high rise in job numbers. At the same time, housing starts continued to grow and during last month reached their highest level since 2007. This growth could help to increase Canada’s GDP in the second quarter of 2012 and eventually could cause the Bank of Canada to start hiking interest rates this summer.

Canada’s economy has been doing quite well lately, which resulted in 58,200 new jobs added in April, following an enormous increase in hiring activity in March, when 70,000 new full-time positions and 12,400 part-time jobs were created. This represented the strongest back-to-back monthly increase in new jobs in Canada since 1981.

As CIBC chief economist Avery Shenfeld suggests, such strong numbers could have the Bank of Canada reconsidering when to hike. Even though Mr. Shenfeld’s original expectations were that the Bank would keep interest rates unchanged this year, he admits that the powerful data lead him to rethink the possibility now.

Our call didn’t incorporate such a massive hiring binge in the March-April period, nor the surge in housing starts we saw for April. There’s now reasonable odds that Q2 GDP will top 3 per cent and make up for the lost ground in the first quarter. 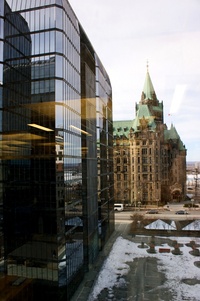 Bank of Canada by Peter Smith

Furthermore, he adds that any change in his rate hike prediction will depend on the economic indicators for March and April, which are yet to be released. If those figures show the GDP reaching 3 per cent, unlike CIBC’s 2.7 per cent prediction, it’s highly probable that the Bank of Canada could begin hiking by the third quarter. On the other hand, if the GDP doesn’t rise as high as 3 per cent, it would probably take some time before the Bank moves on rates. As Mr. Shenfeld suggests, the possible outcomes could be basically binary: a portion of 50-75 basis points of rate hikes starting in the third quarter, or nothing until 2012. Both ways, it’s expected that the Bank of Canada would be even more hawkish in its rate-setting announcement next month.

Even though this information might suggest that Canada’s economy does quite well and if the situation doesn’t change, the Bank of Canada may increase interest rates, the situation is about the change. As Ian Pollick, rates strategist with RBC capital markets says,

Two data points does not a trend make. The Bank of Canada cannot raise rates simply on employment alone, but to the degree that it does seem that there is employment coming back on-line, there is a little moderation in the year-over-year wage gain, so I think the bank will probably take that as a sign that they can stay on the sidelines for now, so I really don’t think it pushes up against the policy stance.

Housing Starts Increase, But Condo Surge Is Not Sustainable

Housing starts in April continued to grow and reached an annualized rate of 244,000, which beat forecasts of 204,000 made by most economists. These data show that Canadian housing starts are very strong, mainly due to apartments and condominiums, which recorded the second-highest number of starts on record for the month of April. Overall, multiple urban starts in Canada went up by 27 per cent to 158,500 on a seasonally adjusted basis.

Most market watchers were surprised by these figures, since they expected that a warm winter would allow many projects to break ground earlier and therefore starts would begin to fall in subsequent months as a result. 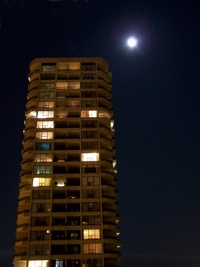 According to Dina Cover, an economist at Toronto-Dominion Bank, the unexpected growth housing starts has been supported by the outlook of looming interest rate hikes by the Bank of Canada, which would result in growing mortgage rates. Furthermore, she adds:

Overall, we expect home building activity to remain healthy this year, as builders work to complete projects before the Bank of Canada begins to hike interest rates — a move we expect to take place in September.

The biggest increase in urban starts was recorded in Quebec; however, the highest number of starts was in Ontario. Home starts in Ontario rose by 12.2 per cent, which corresponds with a seasonally adjusted rate of 95,400. Of course, the most overheated market was in Toronto, where housing starts grew by 11,000. At the moment, developers are continuing to construct more and more new buildings, which requires sufficient demand. However, if the number of housing starts continues to grow at this pace and demand falls, the housing market would have to face a huge problem.

On the other hand, the Canada Mortgage and Housing Corporation expressed its opinion that there can’t be seen any signs of overheating yet. In its annual report, CMHC continues:

Clear evidence of a bubble is lacking. We continue to monitor very closely housing prices and underlying factors such as demographic and economic fundamentals and financial conditions across all major urban centers, including condominium markets.

According to CMHC, occupancy remains high in Canada’s most important condo market, Toronto. Only less than 5 per cent out of more than 17,000 condo units completed in the GTA during the last fiscal year weren’t sold by developers.

A rather different opinion was expressed by Robert Kavcic, an economist at BMO Capital Markets, who points out that the enormous growth in housing starts was exceeding demand in the past year. It’s therefore highly probable that it’ll take some time before the Bank of Canada hikes the interest rates.