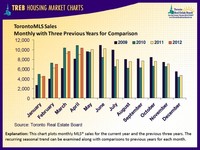 Greater Toronto REALTORS® released their newest report concerning April home sales in Toronto and the GTA. The overall number of 10,350 home sales reported through the TorontoMLS System in April 2012 represents an 18 per cent increase compared to April 2011 with only 8,778 transactions. The figures reported the strongest sales growth in the single-detached market segment, which was up by 22 per cent compared to last year.

The demand for single-detached homes in Toronto and the GTA has been very high in April 2012. The amount of single-detached listings wasn’t able to satisfy this growing demand and the competition between buyers in this market segment rapidly grew. It was therefore no surprise that the strongest annual price increase was also experienced in the single-detached segment.

The average selling price in the GTA recorded an 8.5 per cent year-over-year increase, reaching $517,556. As mentioned above, the strongest pace of price growth was recorded in the single-detached market segment. Prices in the better supplied condominium apartment segment also went up, albeit at a more moderate pace of 4 per cent.

“Monthly mortgage payments remain affordable for home buyers in the Greater Toronto Area. While interest rates are generally expected to increase over the next two years, the extent and timing of rate hikes has been thrown into question by slower than expected economic growth in the first quarter of this year. On net, borrowing costs are expected to remain a positive factor influencing home sales through 2012,” said Jason Mercer, TREB’s Senior Manager of Market Analysis.