Besides temperatures above historical averages, June has also brought us a new CIBC Debt Poll. The poll conducted by Harris/Decima shows some not very positive figures as well as some more positive trends. The bottom line is that the vast majority of Canadians are in debt. To be more specific, 72 per cent hold some form of debt, while 49 per cent have made at least one lump sum payment in the course of the last year. The age distribution shows that younger people are more likely to hold debt (84 per cent in the age group of 25-34 years old) and people living in Atlantic Canada are more prone to be in debt than residents of Ontario (78 per cent compared to 69 per cent).

These numbers do not tell us much without a broader perspective. Seventy two per cent is a very high number although it is neither highest in the world (the situation in the U.S. is even worse) nor necessary problematic. This number needs to be analyzed further. There’s a substantial difference between having one loan and having five. Canadian debt can be better understood as follows: 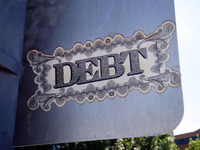 As you can see, the situation is not that dire. On the other hand, the amount of separate debts does not predict an ability to pay them back. Compared with the previous year, the situation has not changed. Since loans last usually several years and in the case of mortgages, even several decades, a sharp decline could not be expected. However, the number is not rising. That shows either a higher cautiousness of consumers or a decreased willingness of banks to lend them money. The positive fact we can observe is the increased interest of debtors to pay their debts back sooner than necessary. This can be credited to increased interests that came along with the financial crisis as well as the realization that life on debt can be risky especially when the economy is unstable and unemployment relatively high. Its levels before the crisis hit, around 6 per cent, were the lowest since the ’80s. The financial turmoil and subsequent economic slowdown in the world brought it to 8.5 per cent in the summer of 2009. It has been declining since then, but people have realized that there is nothing like endless economic growth.

Another interesting and maybe also intuitive fact is that people who are trying to speed up their repayments have more than five separate debts. Sixty-two per cent of them made a lump sum debt payment in the last 12 months compared to the national average of 49 per cent. These extra payments are directed mostly on reducing card balances (62 per cent), 46 per cent to line of credit balances (not specified further in the research), and 22 per cent of all payments were aimed at mortgages.

At the end of the day the ability to service your debts is dependent not just on your salary but also on your debt management. It may be a good idea to find an advisor who will optimize your debt portfolio. A good advisor will ensure you the lower interest rates and other benefits, as for example more favourable terms. Even if you don’t have any, there are some simple rules: