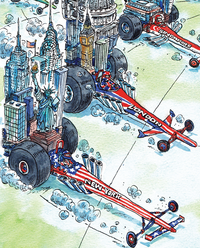 Cities have become important wealth producing hubs of national economies. More than a half of the world’s population lives in cities, producing more than 80 per cent of the global GDP. Cities are attractive markets for investors since the densely distributed population in a city creates a much stronger purchasing power. As progress in transportation and communication increases, the production and services of companies settled in one city grow, resulting in companies offering their outputs to other cities.

The global business strategy has already started to be planned from an urban rather than a rural perspective and the natural rivalry among different cities begins to grow. Furthermore, with the rapid growth and development of many cities, especially in emerging markets like China and India, competition between particular cities only gets fiercer.

Keeping in mind that the rapid growth of cities is an important economic factor, the Economist’s Intelligence Unit was commissioned by Citigroup to carry out and compile a comprehensive report and index of 120 of the world’s most competitive cities. According to the EIU, competitiveness is a holistic concept:

While economic size and growth are important and necessary, several other factors determine a city’s overall competitiveness, including its business and regulatory environment, the quality of human capital, and indeed the quality of life. These factors not only help a city sustain a high economic growth rate, but also create a stable and harmonious business and social environment.

The survey ranked cities in eight categories: economic strength, physical capital, financial maturity, institutional effectiveness, social and cultural character, environment and natural hazards, and global appeal. The cities evaluated in the survey together comprise approximately 29 per cent of the global economy, with a combined GDP of US $20.2 trillion.

The overall first place in the ranking goes to New York, which was followed by London and Singapore. Toronto didn’t make it to the top 10, but still it was the most competitive Canadian city, ranking 12th in the world with an overall score of 63.9. According to the survey, Toronto is one of the nine cities in the world that scored 100 in the financial maturity category. There were only two other Canadian cities that made it to the list: Vancouver (18th) and Montreal (22nd).

Furthermore, the survey reflects Asia’s economic rise in the economic competitiveness of its cities. The economic strength category, the most highly weighted, was dominated by Asian cities, as fifteen cities from Asia made it to the top 20.

The index shows that the most crucial advantage of European and American cities is their domination in the human capital category of the ranking. Cities from these regions are able to develop and attract talented people mainly due to the quality of their educational systems and the entrepreneurial mindset of their citizens as well as other factors such as cultural activities and overall good quality of life. However, an important question arises: where will the world’s newly emerging talent move? The EIU suggests:

Just as America’s cities received a huge talent boost in the wake of the Second World War, so too might emerging market cities in the wake of today’s ongoing financial crisis in the West. Opportunistic cities are spotting the gap: Dubai, Santiago, and Singapore are just three examples of cities with specific programmes in place to attract talent from elsewhere.

These cities attract talented workers and entrepreneurs thanks to their business-friendly environments as well as various national incentives. These cities may have not been very appealing before a decade but it’s very likely that their attractiveness will rapidly grow in the next decade.