Before any changes to structures are made, a city?s planning department must issue a formal document called a building permit. Building permits ensure that your plans comply with building codes that regulate the processes of demolition, renovation, installation, construction, augmentation, or other changes in the use of a building.

In June, the total value of building permits fell by 2.5 per cent to $6.8 billion. Compared to May when a 7.1 per cent increase was recorded, this is quite a large depression. This was mostly due to a decrease in the non-residential and residential sectors in Alberta and British Columbia.

Contractors took out $2.5 billion worth of permits in the non-residential sector, down 12.3 per cent. This decrease followed a 3.6 per cent gain in May. Alberta and British Columbia account for most of the decrease that was reported in the six provinces overall. The institutional component especially was affected by a sharp fall. The value of institutional building permits dropped 45.9 per cent to $519 million in June, following a 72.0 per cent gain the previous month. As many as eight provinces, led by British Columbia and Alberta, posted declines. The decrease in British Columbia reflected lower construction intentions for government buildings, while Alberta?s decline was mainly the result of lower construction intentions for medical facilities. Changes in the industrial and commercial components weren?t that substantial in June: the latter edged down 0.2 per cent to $476 million and the former was up 6.8 per cent, worth $1.5 billion. 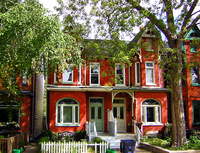 Toronto House by Robert Jack
?? Will

The total value of building permits declined in most provinces and most census metropolitan areas in June. Seven provinces posted declines, with Alberta and British Columbia at the top. Ontario had the largest monthly increase ? a result of growth in the value of building permits for residential and non-residential construction. The total value of permits declined in 22 of the 34 census metropolitan areas. Vancouver, Calgary, and Edmonton experienced the largest declines. In Vancouver and Calgary, the decrease resulted primarily from lower construction intentions for institutional buildings and multi-family dwellings. The decline observed in Edmonton was mainly attributable to lower construction intentions for institutional buildings and single-family dwellings. Toronto, however, posted the largest advance: construction permits rose for residential buildings, mainly for semi-detached houses, row houses and single homes, and, to a lesser extent, for non-residential buildings.

MLS? Systems reported a month ago that sales in Canada edged lower by 1.3 per cent on a month-over-month basis in June 2012. This follows the 3.4 per cent fall posted in May. National activity was down from the previous month in slightly more than half of all local markets, with Greater Toronto and Vancouver contributing most to the small decline. Actual (not seasonally adjusted) activity stood 4.4 per cent below levels in June 2012, marking the first year-over-year decline since April 2011. The number of newly listed homes rose 1.4 per cent in June compared to May. The decline in sales activity combined with an uptick in new listings resulted in a more balanced national housing market in June. The national average price for homes sold slipped to $369,339 in June, which equals 0.8 per cent on a year-over-year basis. 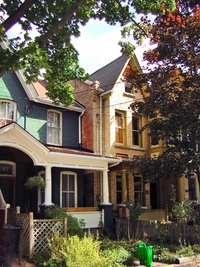 Toronto House by Robert
Jack ?? Will

According to statistics released recently by The Canadian Real Estate Association (CREA), national resale housing activity changed slightly (-0.01 per cent) from June to July. Activity was roughly evenly split between those local housing that saw month-over-month gains and those that posted monthly declines. Activity was up from the previous month in Kingston, Chilliwack, and Calgary. Fewer sales in Toronto, Newfoundland & Labrador, and Edmonton counterbalanced the growing tendency in these areas. Actual (not seasonally adjusted) activity was up 3.3 per cent year-over-year in July 2012, with gains in Calgary and slower sales in Vancouver. ?Recent changes to mortgage regulations were widely expected to temper sales and prices in Greater Toronto and Greater Vancouver, and the data released this month confirmed that,? said Wayne Moen, CREA President.

The number of newly listed homes fell 3.3 per cent in July compared to June, with declines in more than half of all local markets including Montreal, Toronto, Vancouver, the Fraser Valley, Calgary, and Edmonton. Supported by stable sales activity and fewer new listings, the national housing market remains firmly set in balanced market territory.

While the actual national average price for homes sold in July 2012 was $353,147, down 2 per cent from the same month last year, average sale prices were up from last year?s levels in about seven of every ten local Canadian markets. However, declining sales activity in Greater Vancouver continues to impact the national average price. Unlike average price, the MLS? Home Price Index (MLS? HPI) is not affected by changes in the mix of sales, so it provides a better gauge of Canadian home price trends. The index tracks home price trends in five of Canada?s most active housing markets, including Greater Vancouver, the Fraser Valley, Calgary, Greater Toronto, and Montreal. These five markets comprise approximately 45 per cent of all home sales activity in Canada. The MLS? HPI rose 4.5 per cent year-over-year in July 2012. This was the third time in as many months that the year-over-year gain shrank, and it marks the slowest rate of increase in over a year.

Uniqueness of Every Region

Now you can see that Canada?s real estate market varies greatly from region to region and there are many aspects of the variation. Each of the provinces walks its separate way. Discussing national averages can therefore be quite misleading, and local factors and the nature of particular areas should be taken into consideration. ?Sales and price trends can be very different from one market to the next, and run counter to national trends. Buyers and sellers should talk to their REALTOR? to understand how the housing market is shaping up in their area,? confirmed Wayne Moen, CREA President.