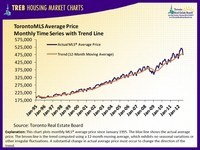 Greater Toronto REALTORS® have released their newest figures concerning the July housing market in Toronto and the GTA. According to the report, there were 7,570 sales through the TorontoMLS system in July 2012, which is 1.5 per cent less compared to July 2011 with 7,683 transactions. The decline was most noticeable in the condominium segment in the Toronto proper. The total number of sales in the rest of the GTA recorded an increase compared to the same period last year.

A significant year-over-year increase in sales in the first half of 2012 and an earlier peak in sales this spring compared to 2011 help explain more moderate sales this summer. Furthermore, as Toronto Real Estate Board President Ann Hannah says, “New mortgage lending guidelines and the additional upfront cost of the City of Toronto land transfer tax also prompted some households to put their buying decision on hold.“

The average selling price in Toronto and the GTA has recorded a 4 per cent year-over-year increase, reaching $476,947 this July. The MLS® Home Price Index (MLS® HPI) composite index, which allows for an apples-to-apples comparison of benchmark home prices from one year to the next, grew by 7.1 per cent year-over-year.

According to Jason Mercer, TREB’s Senior Manager of Market Analysis, the supply of the GTA housing market has improved in recent months. Wide choices in the market created many advantages for buyers, resulting in decreased pressure on the average home price in July 2012. He adds,

The mix of homes sold in July 2012 versus July 2011 also appears to have changed, further influencing the average selling price. This is evidenced by the different annual rates of growth between the overall average price and the MLS HPI®.