The gloomy global economic situation is affecting Bank of Canada policy makers, who are trying to ease their tone on an eventual resumption of interest rate hikes. The Bank of Canada maintained its overnight rate target at 1 per cent on July 17, and borrowing costs have been unchanged since September 2010.

Experts from the Bank of Canada suggested that recent improvements pointed to a restored contraction in Europe, while the slowing growth has been greater than expected in China and other emerging economies. Furthermore, the Bank pointed out that the U.S. maintained its economic expansion at a gradual but somewhat slower pace. According to the Bank’s experts, these global trends would be offset in Canada by domestic factors such as consumption and business investment, resulting in moderate economic growth.

The expectations of the Bank experts were that the Canadian economy will increase by 2.1 per cent in 2012 and 2.3 per cent in 2013. This is a decrease from its previous forecasts of a 2.4 per cent growth this year and next. The weaker predictions mean that it would now be the second half of 2013 before the economy gets back to full capacity.

Furthermore, the forecasts say that core inflation would remain somewhere near the two per cent target going forward, but the total CPI inflation is expected to drop noticeably under that level owing to the recent decrease in gasoline prices.

New mortgage rules in Canada are an important issue that shouldn’t be overlooked. The new rules tightening Canada’s mortgage industry will reduce the maximum amortization period from 30 years for government-insured mortgages to 25 years. The main aim of this change was to encourage homeowners not to stretch themselves too much when buying a home. Moreover, by shortening the amortization period, the amount of interest homeowners pay will also be lowered over the life of their mortgage.

Furthermore, the government has also lowered the maximum mortgage amount for refinancing to 80 per cent of the appraised value of properties from the current 85 per cent. Refinancing remains an option that saves money on interest costs. This regulation promotes saving by property ownership and inspires homeowners to carefully consider signing up for a loan backed by their property. The main aim of the new measures is to ensure that the housing market in Canada maintains its stability and that Canadians won’t overextend themselves financially. 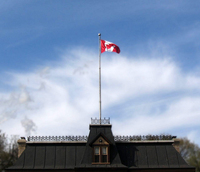 Last week, the situation with fixed mortgage rates started to become complicated, as multiple broker-channel lenders got more competitive on pricing. The tight situation began with mortgage companies in Ontario offering five-year fixed mortgages at 2.94 per cent, which was the lowest ever. This launched a massive decrease of fixed rates to record lows with brokers advertising five-year rates at 2.94 to 2.99 per cent or even less.

A major portion of this discounting was caused by lower bond yields, which substantially influence fixed rates. However, we should be aware that the rates can increase as easily and quickly as they dropped. Fixed-rate mortgages have become very appealing as the gap between fixed and variable mortgages narrows and a new low of 2.94 percent has been settled. However, it’s worth noting that on Friday, July 27th, the five-year government yield jumped 12 basis points — representing the biggest one-day growth in almost a year. After a long declining trend and a period of sideways trading, this may indicate a substantial change in the market situation. The reverse attitude of bond traders could halt the drop in yield as well as in fixed mortgage changes. Those waiting for lower rates are exposing themselves to a risk of rates backing up a few notches.

The heated housing market in Toronto has become a widely discussed topic mainly because of the disputes between some industry experts. The one group believes that Toronto housing prices are due for a correction while the other thinks that the market will continue to plug away. However, sales and home prices in 2012 have exceeded their 2011 level on a year-over-year basis.

Mortgage rates in Toronto are expected to stay at relatively low levels over the next one to two years. Variable rates driven by the Bank of Canada’s overnight rate should stay at 1.00 per cent until the third quarter of 2012. The expected result is that the discounted five-year variable rates will stay close to 3.00 per cent, where they have been since the last three months of 2011. Furthermore, tighter lender competition has resulted in the best mortgage rates Toronto has ever seen. A substantial contribution to Toronto’s housing boom has been made by the record low levels of mortgage rates in the city.

2 thoughts on “Mortgage Rates in Toronto”

Thanks. I have been longing for a similar blog. Currently i am looking for a mortgage professional for a new home purchase and the information help me learned many new things. I would bookmark your post for future references.

Sounds good, thanks for sharing your knowledge with us on the Toronto Mortgage rules I am sure this information will be helpful for all of us, looking forward for more updates.