Toronto at Night by Andy Burgess

The Canada Mortgage and Housing Corporation (CMHC) forecasts a moderate slowdown in Canada housing market throughout 2012 and 2013, as both home sales and new construction begin to slow. However, the report informs that this cooling shouldn?t create a significant economic threat.

Finance Minister Jim Flaherty considers the slowdown a good thing. He mentions that according to experts from the financial industry as well as developers, ?The situation was evolving where expectations by purchasers were excessive with respect to single-family dwellings, and ultimately unaffordable when mortgage rates go up.?

The forecasts say that Canada?s housing markets should moderate over the rest of 2012 and into 2013 after a period of sustained activity, especially in the multiples segment, over the first half of 2012. The result of balanced market conditions in most local housing markets will be a slowdown in house price growth as well. A modest increase in interest rates and weak employment growth will moderate the number of transactions on the resale market.

The supply of existing homes will continue to grow during the rest of 2012 and active listings will approach an average of 27,000 units this year. Prices in 2012 will grow at a moderate pace due to the balanced market conditions that don?t favour sellers or buyers. The average price will grow by 3.5 per cent, settling at $325,000.

Market Specialists Remain Divided Over the Impact on the Economy 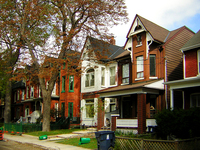 Toronto Houses by Robert
Jack ?? Will

Mr. Flaherty suggests that he?d ?rather see some softening in the markets, particularly in Toronto and Vancouver, than have a rapid decline. ? As Craig Alexander, chief economist at Toronto-Dominion Bank, points out, a slowdown in Canada?s housing market does not pose an economic threat but is a natural outcome of the strength that has been in real estate in Canada for more than ten years. He adds:

We need to keep in mind that a 10 to 15 per cent drop in sales and prices over the next three years sounds quite dramatic, but when you think about the real estate market? there have been years where we?ve had have 10 per cent sales growth and 10 per cent price gains.

On the other hand, there are voices warning about the importance of the impact that rising house prices have on the Canadian economy and the labour market. Ben Rabidoux, an analyst with M Hanson Advisors, points out several distressing trends that could cause significant problems. First of all, construction and renovations significantly contribute to gross domestic product ? not to mention that a huge segment of the labour market depends on residential construction. Furthermore, Mr. Rabidoux mentions a psychological effect when people feeling their house is of high value feel wealthier and therefore save less for retirement and tap their home equity more often. A change of behaviour could have a negative impact on the labour market and the economy. He warns that ?rising house prices and high demand for new homes have an impact on the job market, and it?s difficult to see how we can move back to long-term trends without it meaning, frankly, a recession.?

There?s no doubt that one of the main factors of this slowdown is the new tight mortgage rules. People are feeling uncertain about the housing market as well as the impacts of the new mortgage rules and therefore wait with listing their houses.

A report from the Canadian Real Estate Association indicates that the slowdown in the housing market is unavoidable. New listings went down 3.3 per cent in July compared to June. The decrease was recorded in more than half of Canadian markets, including Toronto, Vancouver, Montreal, Calgary, and Edmonton.