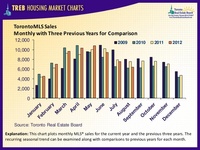 Greater Toronto Area (GTA) REALTORS® reported 6,418 sales through the TorontoMLS system in August 2012. This represents a major decline of 12.5 per cent compared to the 7,330 sales reported in August last year. The number of new listings reported was down by 5.5 per cent compared to August 2011.It seems that the mortgage lending guidelines that came into effect in July have done some damage to the market already. Residential transactions experienced a decline compared to the same period last year.

Jason Mercer, TREB’s Senior Manager of Market Analysis, commented on the market situation: “While sales were down year-over-year in the GTA, so too were new listings. As a result, market conditions remained quite tight with substantial competition between buyers in the low-rise market segment. The trends for sales and new listings are moving somewhat in synch, suggesting that the relationship between sales and listings will continue to promote price growth moving forward.”

The total number of new listings for sale on the City of Toronto’s MLS® reached 4,273, decreasing from 4,805 compared to last year’s results. The Greater Toronto Area experienced a similar minor drop from 7,625 to 7,475 new listings in a year-to-year comparison of the August market.