Another month is over and Greater Toronto Area (GTA) REALTORS® have released their newest figures. The stats report 5,879 transactions through the Toronto MLS system in September 2012 with an average selling price of $503,662, which is 8.5 per cent more than in September 2011. The biggest price growth was recorded in the City of Toronto, where the average condo was sold for $377,422 this September, representing an 8 per cent year-over-year increase.

The impact of tighter lending rules has struck the housing market in the GTA, with sales falling by 21 per cent compared to last year. Sales of detached homes were down 19 per cent across the GTA, while the City of Toronto alone experienced a 27 per cent downfall. However, it should be noted that September 2012 was two working days shorter than September 2011 and most of transactions are entered on working days. Considering working days only, sales were down by 12.5 per cent on a year-over-year basis. As Toronto Real Estate Board President Ann Hannah suggests, stricter mortgage lending guidelines are pushing the overall number of sales down. At the same time, competition between buyers remains tight. Furthermore, the months of inventory trend maintains low levels from a historic perspective, explaining the strong price growth that we’re experiencing. 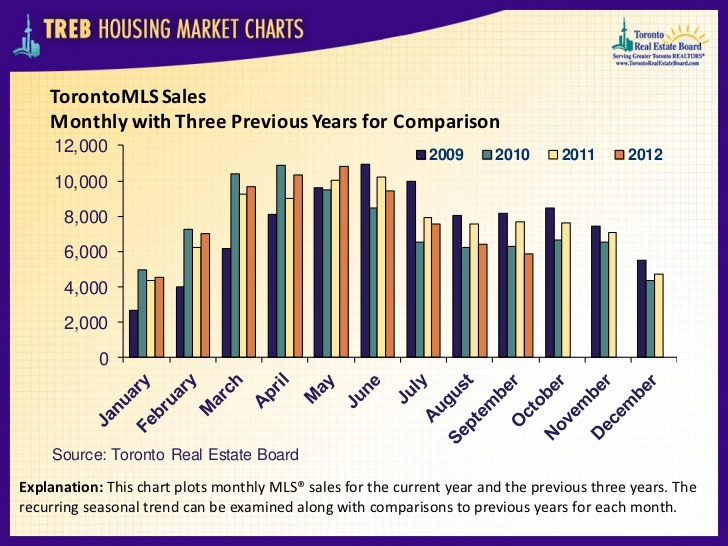 Average selling prices in September 2012 rose for all major home types in comparison with last year’s September. The strongest price growth was recorded in the City of Toronto, including condominium apartments, with an eight per cent year-over-year increase. Moreover, all substantial home types included in the MLS® Home Price Index (MLS® HPI) were up on a year-over-year basis, with considerably higher increases for low-rise home types.

If the consensus economic outlook doesn’t substantially change, home prices will continue to grow through 2013 according to Jason Mercer, TREB’s Senior Manager of Market Analysis. “Based on inventory levels, price growth will be strongest for low-rise home types, including single-detached and semi-detached houses and town homes,“ he adds.With a decreasing number of sales, increasing prices, and new listings rising up by 4 per cent year-over-year as well as plenty of potential resale condo supply expected over the next year, Toronto is quickly shifting to a buyer’s market for the first time since the recession. As the National Bank Financial showed, the ratio of active listings to sales in Toronto reached its highest level in at least 14 years except from periods of recession. 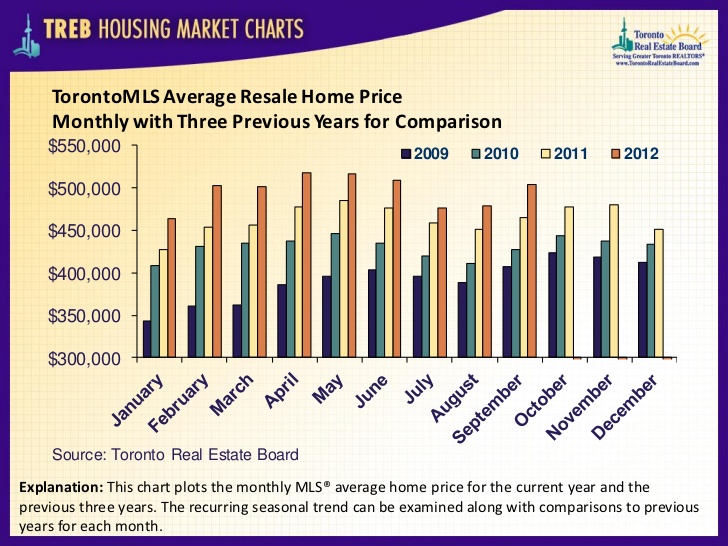 According to Royal LePage, price gains in the Toronto housing market in September 2012 continue to be healthy — even though the number of sales was decreasing. The strongest price gains were in the detached bungalow and two-storey home market segments, though inventory in these segments remains low. The condominium market segment, which does not lack inventory, recorded more modest price gains.

Royal LePage’s House Price Survey settles the average price of a standard Toronto condominium at $359,673 in September 2012, representing a 2.7 per cent over the same time last year. Buyers are feeling less pressure to enter the market compared to last year, when prices were increasing at extensive rates. According to senior vice president of Royal LePage Real Estate Services, Gino Romanese, “buyers feel like they have more time.“Lower pressure on buyers may be one of the reasons for a 21 per cent decrease in home sales in the GTA compared to last year’s September. Taking into consideration the fact that this September was two days shorter, the decline of sales would be 12.5 per cent in comparison with September 2011. 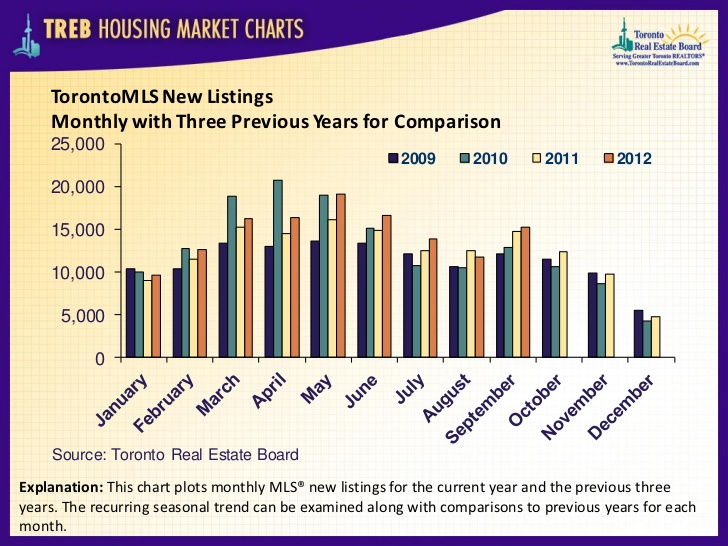 Even though the number of transactions went substantially reduced, prices were still growing. Is it possible that this downturn in the number of sales would lead to lower prices? Phil Soper, president of Royal LePage, thinks that such a decline in sales does precede a softening in home prices. However, we should keep in mind that these changes that we’re now witnessing are of cyclical character and represent a “natural market reaction after a period of strong expansion.“ This natural reaction was stimulated by the government’s intervention in the market in July when new, tighter mortgage rules were adopted.

Furthermore, “in the commercial real estate market, a similar trend is apparent, with amount of space leased down and leasing rates mixed, some up and some down.“ The third quarter of 2012 saw a 6.6 per cent drop in the amount of commercial and industrial space leased, from last year’s 3.7 million square feet to 3.5 million square feet this year. However, the average industrial lease rate recorded an increase compared to last year while commercial and retail lease rates were down.

Moreover, there are many real estate experts suggesting that the Toronto real estate market is deflating. Brian Knapp, a real estate veteran, believes that Toronto’s housing market will experience a small pop in which the core city markets will maintain their superior position while the outlying areas will let more air out. He points out that consumer confidence is uncertain and could suddenly deteriorate.

This prediction is supported by many other professionals from the real estate business, such as John Andrew, who works as a director of the executive seminars on corporate and investment real estate at Queen’s University. Professor Andrew notes that there’s nothing surprising about the continuing softness in Toronto’s housing market. Sales in the overall market in the GTA decreased rapidly in September — with the hardest hit affecting the condo market segment in the 416 area code.

This “double-whammy“ in the condo segment is mainly because more and more buyers are stepping back, even as more new units are arriving on the market. Furthermore, he warns that between 48,000 and 52,000 units are still under construction. 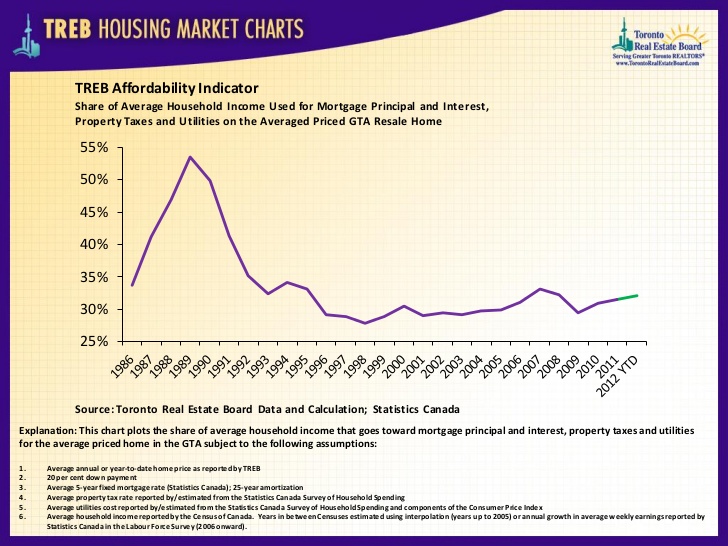 Such excess in supply will soon force prices to lower significantly — especially in the resale condo market. However, Professor Andrew suggests that the prices of detached houses could continue growing because there is such a shortage. He believes that for many people, a condo just isn’t good enough to substitute a single-family home — even if it’s considerably cheaper than now. Torontonians don’t have to worry that the housing market will crash, as this hasn’t happened in Vancouver “because people have pulled their houses off the market rather than accept a big discount on the price. The same could happen in Toronto,“ he says.