Downtown Toronto has been flooded with more and more new condo towers. However, the new condo market in Toronto has reached its peak and is beginning to cool down. Even though housing starts were higher than expected in September and condo prices maintained a small yet stable increase in the past few months, new condominium apartment sales went 34 per cent down compared to August in the GTA.

Developers and investors were attracted by low interest rates as well as Canada?s stable economy, resulting in Toronto?s leading position in the number of new high-rise building constructions. The extent of the continuous building process of new condominiums was criticized by Finance Minister Flaherty, who pointed out that the central bank warns that record consumer debt and the chance of a sudden housing correction are major risks to the economy. Tight mortgage lending rules are a major factor of this dramatic downturn on the Toronto condo market.

In the summer, the value of building permits fell by 2.5 per cent in June, compared with a 3.6 per cent drop expected by analysts, according to Statistics Canada. However, the overall number was dragged down by a steep decline in non-residential construction plans, while housing permits experienced a 4.2 per cent increase. In August, the value of building permits recorded an increase of 7.9 percent. This was caused by a 25.2 per cent growth of permits in the non-residential sector, which offset a 2.3 per cent decrease in residential permits.

Furthermore, figures from this summer indicate stable growth of permits for single-family units and for multiple-family units, which both rose in value by 4.2 per cent in July. Ontario was the leading province in both categories.

Even though Canadian home prices continued to grow, reaching a third straight record high in June, a slowdown in the pace of price growth indicated that the sizzling housing market is cooling. According to Urbanation, there are 196 condo projects with 52,695 units under construction in Toronto at the moment, including high-profile projects such as Lanterra Development?s Britt Condos, Cinema Tower by Daniels Corp., and Pemberton Group?s U Condominiums.

The tight mortgage restrictions, high prices of the new units, slowing economy and an exceeding supply have driven condo sales down. In July, sales fell by 10 per cent on a year-over-year basis to 1,753 units and the average price dropped 1 per cent to $328,216 according to the Toronto Real Estate Board?s figures. Furthermore, as Bloomberg informs, prices have decreased 11 per cent since February. New condo sales dipped 50 per cent in the second quarter to 4,769 from a record high in the same period in 2011.

New condo unit sales in Toronto recorded a 30 per cent decline in the third quarter from the second quarter. Investors interested in new projects are becoming more cautious as the condo market slows down. Some developers are suggesting that approximately 50 per cent of investors who have nourished much of Toronto?s condo boom over the last five years will choose different areas for their future investments. However, at the same time, developers are reacting by slowing construction activity to meet the decreasing demand.

A recent Urbanation release shows that new condo apartment sales went down by 30 per cent to 3,317 in the third quarter in comparison with the second quarter. The price of unsold units was $573 per square foot at the end of September, representing a 2 per cent increase on a year-over-year basis. Moreover, the Toronto condo resale slowed down as well, with a 32 per cent decrease in sales from the second quarter. 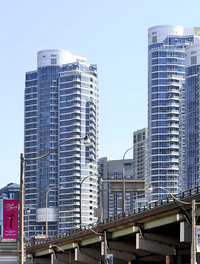 People are tightening their belts and starting to prefer smaller places rather than new condo apartments. As Ben Myers, Urbanation?s executive vice president, suggests, ?The change in the mortgage insurance rules may have forced many buyers to settle for smaller units than they had previously desired. The number of resale transactions for units priced over $400,000 fell 40 per cent compared to last quarter, while there was a 38 per cent quarterly drop in units traded over 1,000 (square feet).?

As opposed to this downturn, the average condo project completed so far in 2012 took 3.85 years from ?sales launch to occupancy? compared to 2.68 years in 2003. ?The share of unsold inventory in Toronto? remains below the ten-year average,? Urbanation claims. The downturn in new condo sales creates a favourable position for owners who want to rent and could trigger a renting boom.

Who?s Going to Live in the New Condos?

Even though the condo market is cooling down, the number of new condos under construction is extremely high. It?s impossible that there could be such a vast natural increase of the population. According to the 2011 Ontario Population Projections report published on the Ministry of Finance website, Ontario is expected to greatly expand in the next 25 years, with the GTA vastly exceeding the rest of the province. The report states,

There?s no doubt that Toronto is a very pleasant city to live in, which attracts a vast number of newcomers. However, StatsCan figures suggest that net migration (people coming to the GTA from elsewhere, rather than the natural increase through births) is expected to account for 68 per cent of the overall population growth in the province.

Toronto is a dynamic city with vast opportunities in all areas: employment, education, culture, and more. The city is appealing especially to young people, many of whom choose to study in Toronto and stay there afterwards, often purchasing a condo. The report suggests that the GTA is projected to remain the region with the youngest age structure due to substantial international migration and positive natural increase. However, the proportion of people aged 65 or more in Toronto is expected to double. Overall, within the GTA, Toronto?s population is expected to increase from 2.74 million in 2011 to 3.42 million in 2036, representing an increase of 24.5 per cent.