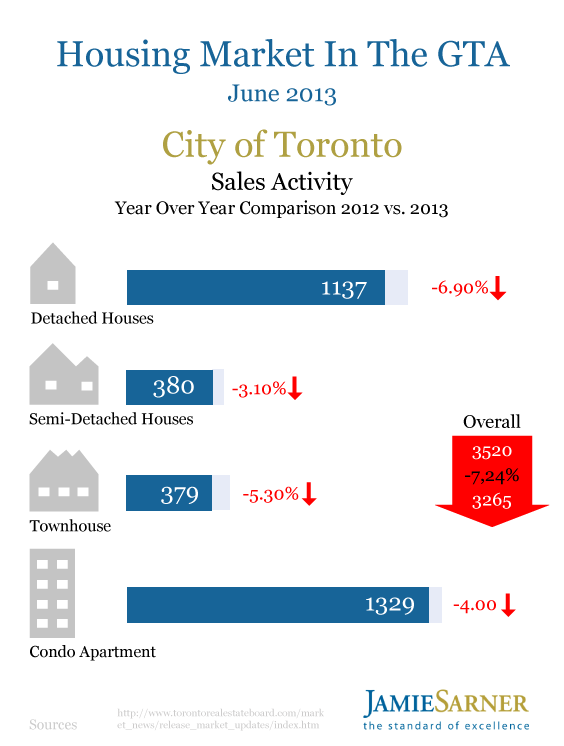 The latest figures of Greater Toronto Area REALTORS® suggest a substantial improvement in housing sales. The 9,061 sales recorded through the Toronto MLS System in June 2013 represent a decrease of less than 1 per cent year-over-year. The rate of sales decline was significantly lower than in the first quarter. Furthermore, the GTA housing market experienced a steeper decline in new listings than in sales, indicating tightening market conditions.

New listings in the City of Toronto slumped by 11.7 per cent, while listings in the 905 area went down just by 2.3 per cent. According to Toronto Real Estate Board president Dianne Usher, we can expect a rise in home sales in the second half of 2013, as an increasing number of homebuyers who postponed their purchase due to tight mortgage lending rules are re-entering the market.

Home prices in the GTA went up by 4.7 per cent year-over-year in June, reaching $531,374. The price growth was driven by single-detached and semi-detached homes, particularly in the City of Toronto. Moreover, the average June condo selling price remained in line with 2012 levels. Jason Mercer, TREB’s senior manager of market analysis, pointed out, 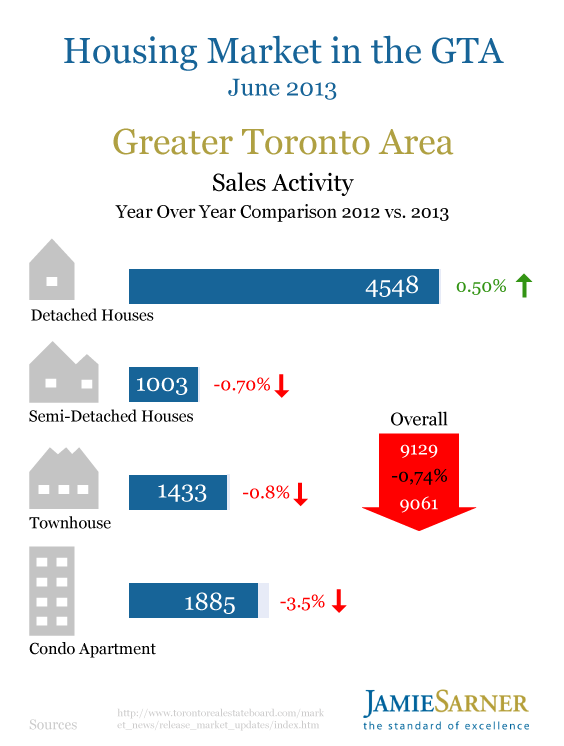 The short supply of low-rise home types in many parts of the GTA relative to the number of households looking to buy continued to prompt strong upward pressure on selling prices of singles and semis. We have also seen enough buyers in the better-supplied condo apartment market to provide support for selling prices at current levels.

These numbers indicate that the GTA housing market continued in a stabilizing trend in the second quarter, despite a slower start to the year. Buyers are returning to the market, often with larger down payments than before the implementation of stricter mortgage lending rules, which reflected also in the demand for luxurious properties. Sales of homes over $1 million went up by 59 per cent in the first half of 2013 compared to the last six months of 2012. 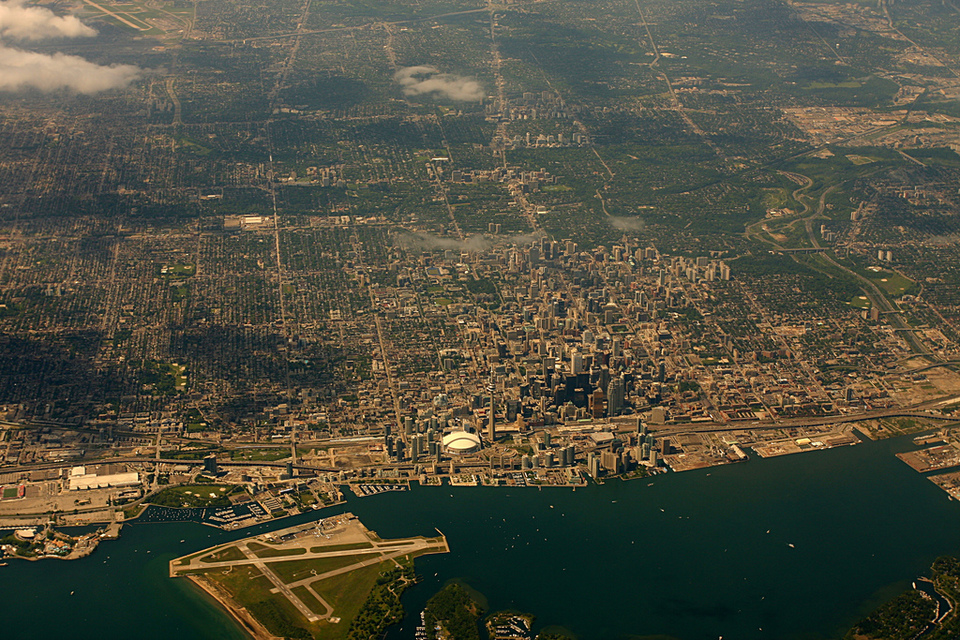 Toronto from the air by Martin Cathrae

Risk of Increased Rates and Oversupply

Even though the recent numbers showed some positive trends, the Toronto housing market is at risk of rising mortgage rates, which have slowly started to increase in the past two months after being at all-time lows since the economic downturn. According to a recent survey conducted by Bank of Montreal Canadian homebuyers do not expect mortgage rates to increase and could be caught off guard. The survey informed that one-third of first-time homebuyers expect interest rates to stay the same over the next five years.

However, a study conducted by Will Dunning, the chief economist for Canada’s mortgage broker lobby, found that an increase in interest rates of just 1 per cent would cause a steep, 15.3 per cent downturn in Toronto area home sales and a 5.8 per cent decline in prices by 2015. A half-point increase in rates would cause a 9 per cent slump in sales and a 2.6 per cent downturn in prices by 2015 compared to 2012 levels. Dunning warned, 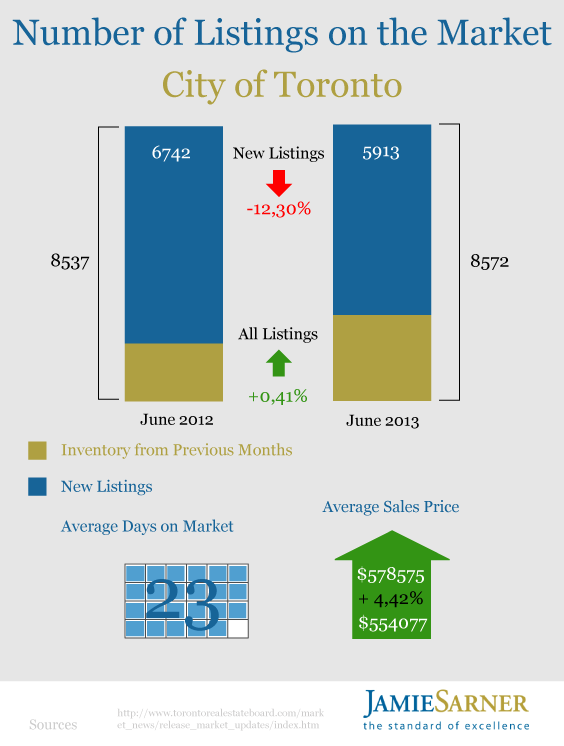 Once house prices start to fall, the outcome is unpredictable. It could be that once consumers start to expect prices to fall, the reduction in demand will be larger than it needs to be (based on economic fundamentals) and therefore price reductions will be larger than they need to be. Moreover, because “housing wealth“ is a very strong driver of job creation, what starts as a small drop in house prices can turn into a major event for the broader economy.

Mortgage rates have been creeping up since last month, when the U.S. Federal Reserve chairman Ben Bernanke warned that the $85 billion (U.S.) in monthly bond buying may be ending later this year. This resulted in a sharp increase of the government of Canada bond yield, which is closely linked to fixed-rate mortgage rates. On Friday, June 28, the Bank of Montreal announced its five-year fixed mortgage rate was going up to 3.59 per cent, which represents an increase of 0.20 per cent, and Royal Bank of Canada raised its five-year fixed rate to 3.69 per cent. Steve Garganis of Mortgage Intelligence commented,

Just three weeks ago, a five-year fixed was 2.89 per cent in the wholesale market, which mortgage brokers deal in. And they have gone up three times since. It’s a pretty substantial increase — half a per cent increase in three weeks. It’s the largest chunk we have seen in the past three or four years in such a short time. 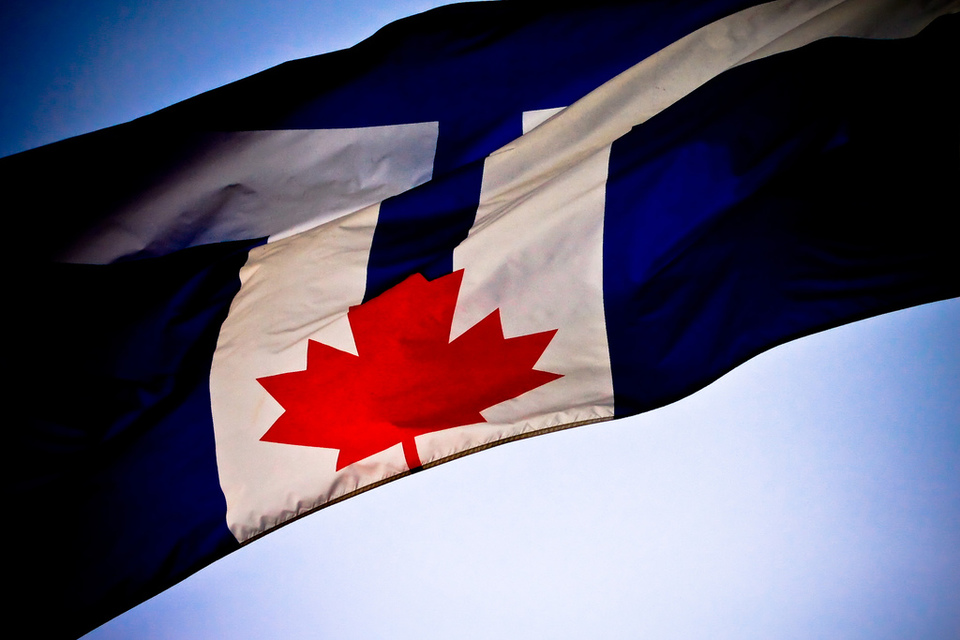 Flag of Toronto by Alex Indigo

There’s definitely a risk that condo prices, which have essentially levelled off, could be under downward pressure over the next couple of years.

This pressure could rebound into other market segments, decreasing sales of single-detached and semi-detached homes as well. David Madani, an economist at Capital Economics, noted,

There are definitely linkages between the condo market and housing more generally. Sales in one market can affect sales in other markets.

Last year, condo builders finished 17,000 new units, and there are still over 50,000 units under construction. The Bank of Canada warned last month that the growing inventory of unsold condos in Toronto could put the Toronto real estate market at risk of a steep correction in prices and residential construction activity. However, many experts remain calm, suggesting a positive outlook. Robert Hogue, RBC senior economist, remarked,

The challenge will be later on when those condos under construction are completed and entering the resale market, but time will tell if it’s oversupply.

There’s no doubt that there are several factors threatening the Toronto housing market. However, the latest figures suggest that the situation's not so bad. Hopefully, condo

prices will continue levelling off and mortgage rates won’t surge. 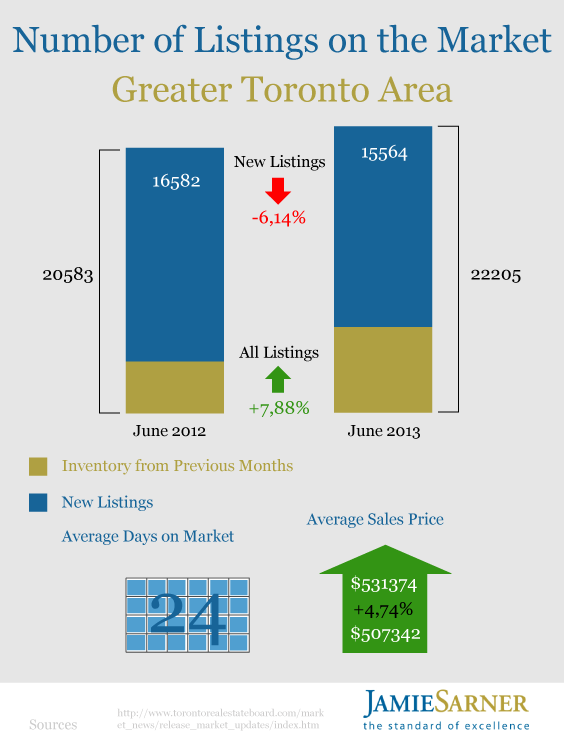