The Toronto resale housing market continues to show strong numbers and denies predictions of a cool-down. Home prices recorded an 11.3 per cent increase over last November, and home sales were up 13.9 per cent year-over-year, according to figures published by Greater Toronto Area REALTORS® on Wednesday, December 4. The opinions on the soaring Toronto housing market vary. While some suggest the market is healthy and strong, others warn that rising prices might lead to a housing bubble. 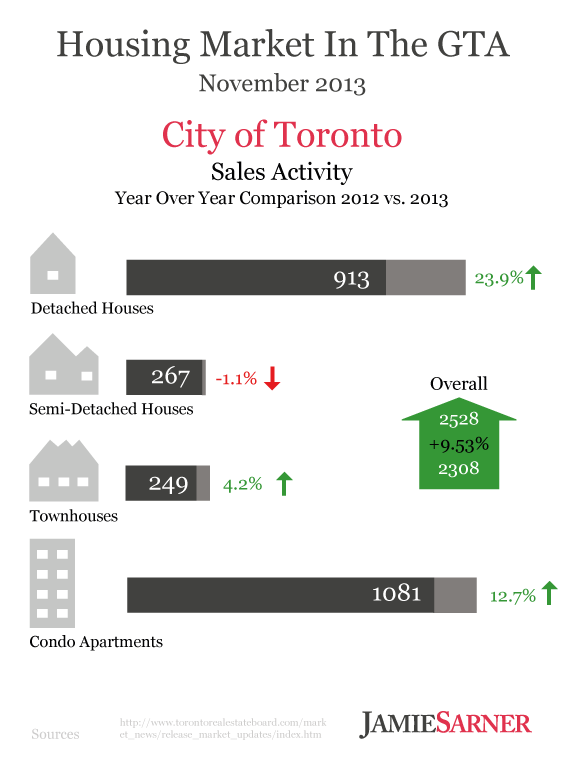 As the figures of Greater Toronto Area REALTORS® indicate, 6,301 homes traded hands in November, which is an increase of 13.9 per cent compared to November 2012, when the sales activity was weak as a result of new tighter mortgage lending rules. Month-end active listings were down by 12.1 per cent. The overall number of new listings this November totalled 9,345, down 4.4 per cent year-over-year. Dianne Usher, Toronto Real Estate Board president, remarked

Growth in sales was strong for most home types in the Greater Toronto Area. Sales growth was led by the single-detached market segment followed by condominium apartments. Together, singles and condos accounted for almost three-quarters of total GTA transactions. 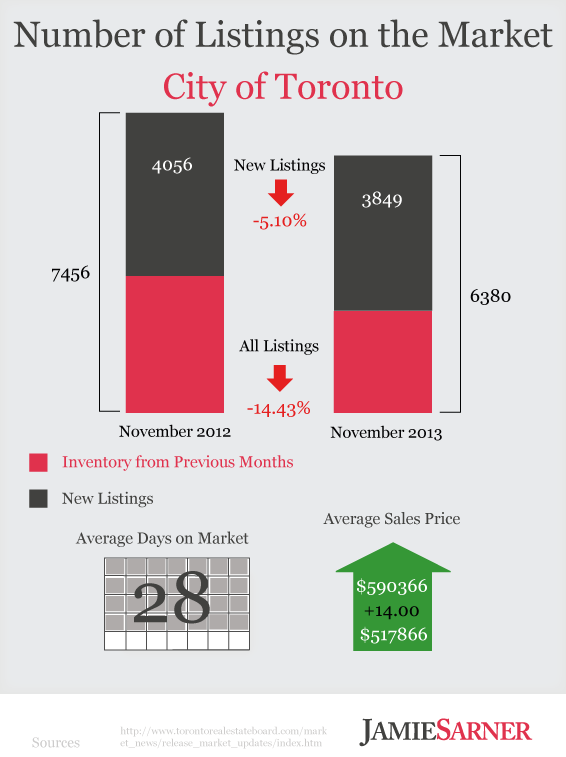 There were some debates regarding the accuracy of the data, which comes from numerous real estate boards across the country. Some housing market experts suggest that the numbers might be higher as a result of errors in counting home sales. The report also stressed that these figures do not include data concerning foreign buyers. Still, the growth was so strong that these errors wouldn't make a significant difference. Usher added that,

With National Housing Day having just passed, housing affordability is top of mind in the GTA and indeed nationally. Despite strong price growth and an uptick in borrowing costs this year, monthly mortgage payments on the average priced home remain affordable for a household earning the average GTA income.

The continuous trend of growing home sales and increasing prices has led to many warnings of an overheated market. The risk of a housing bubble apparently comes from low interest rates, which excessively inflate prices. Despite these warnings, the Bank of Canada remains calm, saying the housing market is improving. Plus, a recent Royal LePage report suggests there's not a condo bubble, even though the number of new condos in Canada’s three largest cities is too high. 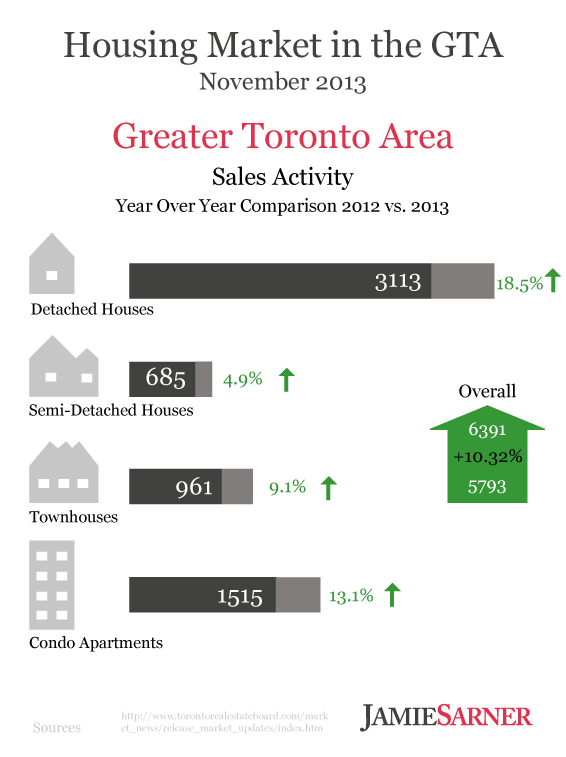 The average selling price of a home in the GTA hit $538,881 in November 2013, which is 11.3 per cent more than the average price of $484,208 reported for November 2012. The MLS® Home Price Index (HPI) Composite Benchmark, which adjusts for changes in the types of houses selling recorded, a year-over-year increase of 5.7 per cent. TREB’s senior manager of market analysis, Jason Mercer, commented,

Whether we consider the average TorontoMLS selling price or the MLS® HPI Composite Benchmark, annual home price growth remained well-above the rate of inflation in November. This makes sense given the fact that competition between buyers increased last month. Transactions were up strongly year-over-year while the number of homes available for sale was down.

As well as low interest rates, prices were also pushed up by decreasing supply, which has been worsening in the past few months — particularly in September, October, and November. The fact that money is cheap and inventory is low, especially in the most sought-after neighbourhoods, drives a lot of buyers into the market. 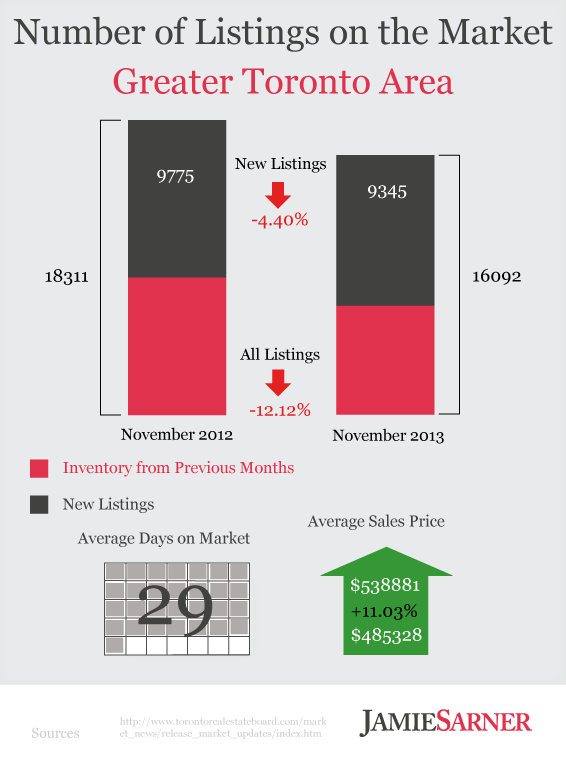 The biggest year-over-year increase in average price was recorded in the detached market sector — at 12.3 percent, reaching $681,597 in the GTA. Resale townhouse prices went up 7.7 per cent, with an average price of $402,965, and prices for semi-detached homes rose 7.4 per cent, with an average price of $505,417. Condo prices showed that there are big differences between the condo markets in the city and in the suburbs, as prices in the 416 region went up 10 per cent while declining 0.4 per cent in the 905 regions.

The numbers indicate that there is some truth to the tale of two housing markets in Toronto. Prices for high-rise homes have continued to flatten this November, while prices for low-rise homes went up more sharply. You can also spot the difference between these two inner markets in their supply. While high rises remain oversupplied, the number of low-rises sold is decreasing.