Even though the temperature went well below zero in Toronto, home sales soared almost 14 per cent year over year in December. Overall, the Toronto housing market ended 2013 with decent numbers.

Greater Toronto Area REALTORS® announced that the number of home sales recorded through the TorontoMLS system in the last month of 2013 reached 4,078, representing an increase of almost 14 per cent compared to the 3,582 sales reported in December 2012. Residential transactions for the full-year 2013 totalled 87,111 — up 2 per cent from the 85,496 sales in 2012. This was despite a slow start and a weak spring season caused by bad weather. 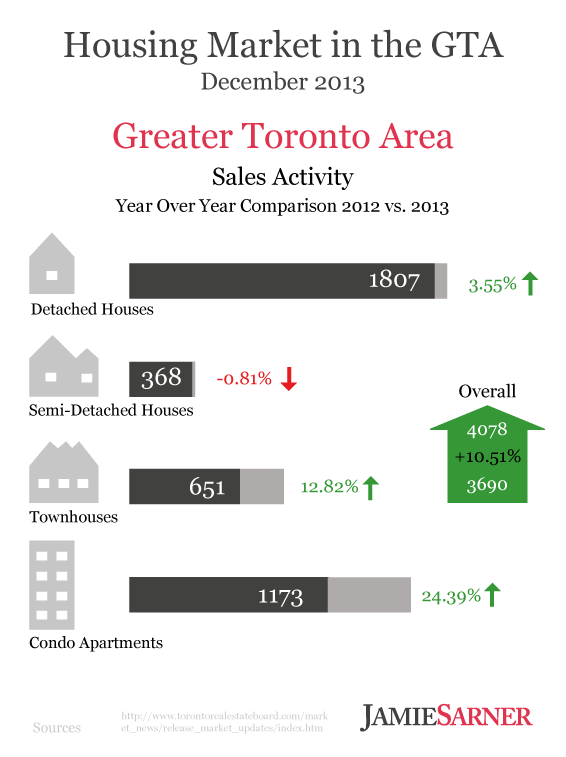 Despite numerous warnings about the oversupplied housing market and a growing bubble, the GTA market maintained healthy growth at the end of the year. Toronto Real Estate Board president Dianne Usher remarked,

After a slow start to the year, sales growth accelerated to a brisk pace in the second half of 2013. Despite the inclement weather in December, we finished the year with a respectable gain in transactions compared to 2012. Looking forward, I believe that home ownership in the GTA will remain affordable as borrowing costs stay low. The result could be a further increase in sales in 2014.

The biggest increase in sales was recorded in the condo sector, which grew a robust 27.8 per cent on a year-over-year basis. Condos were followed by townhouses, with the number of transactions rising 14.8 per cent from December 2012. Detached home sales were up 7.1 per cent, but they saw a huge 6.7 per cent decrease in the City of Toronto. Semi-detached homes experienced the lowest growth, at 2.5 per cent, dragged down by a decline of 0.9 per cent in the suburbs. 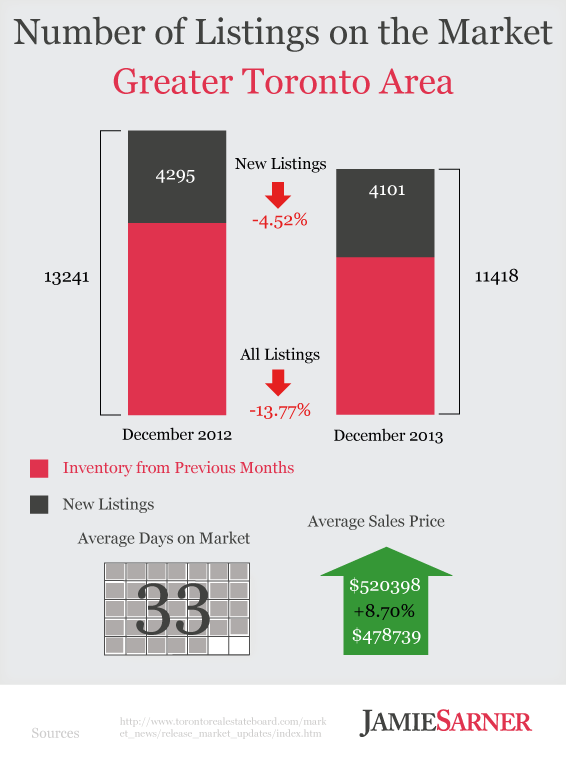 Moreover, new listings entered into the TorontoMLS system declined by almost 4 per cent in December 2013. Growing demand and low supply resulted in bidding wars, particularly in low-rises in Toronto’s most sought-after neighbourhoods. In addition to low inventory and low borrowing costs, the bidding wars were fuelled by buyers who put their decision to buy on hold in 2012 and rushed into the market before their pre-approved mortgage commitments expired. Economists as well as Finance Minister Jim Flaherty warned that cheap money might stimulate a housing bubble and a rate hike might lead to a correction. Nevertheless, TREB suggested we might witness further growth in 2014. 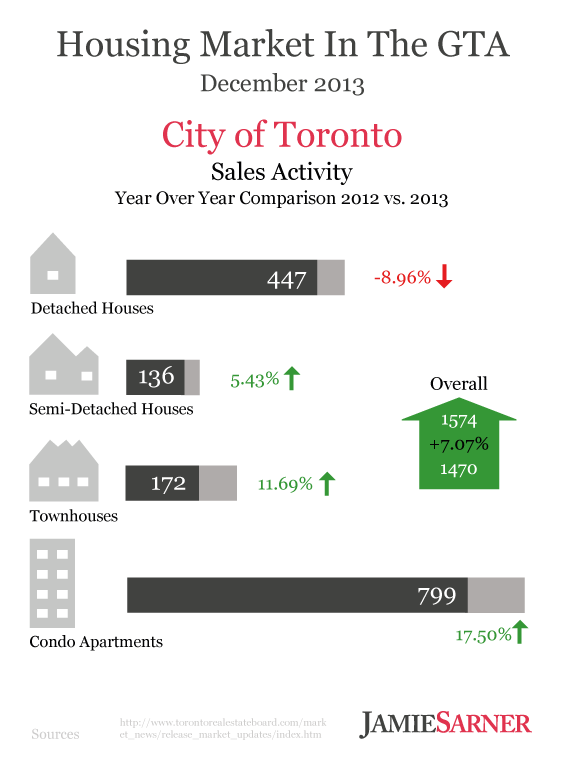 The average selling price will be up again in 2014 and by more than the rate of inflation. The seller’s market conditions that drove price growth in the second half of 2013 will remain in place in many parts of the GTA. Some neighbourhoods, especially those characterized by low-rise home types like singles, semis and town-homes, will continue to have less than two months of inventory.

The differences between the low-rise and high-rise market segments continued in the Toronto housing market in December. A shortage of low-rise homes and tight competition resulted in a strong price growth. Detached homes saw the biggest price increase, with an average home selling for $685,787. This represents 12.5 per cent year-over-year growth in December. Prices for semi-detached homes climbed 11.8 per cent, to an average of 497,805. The average townhouse sold for $400,765, which is 11.2 per cent more than the price of an average townhouse sold in December 2012. 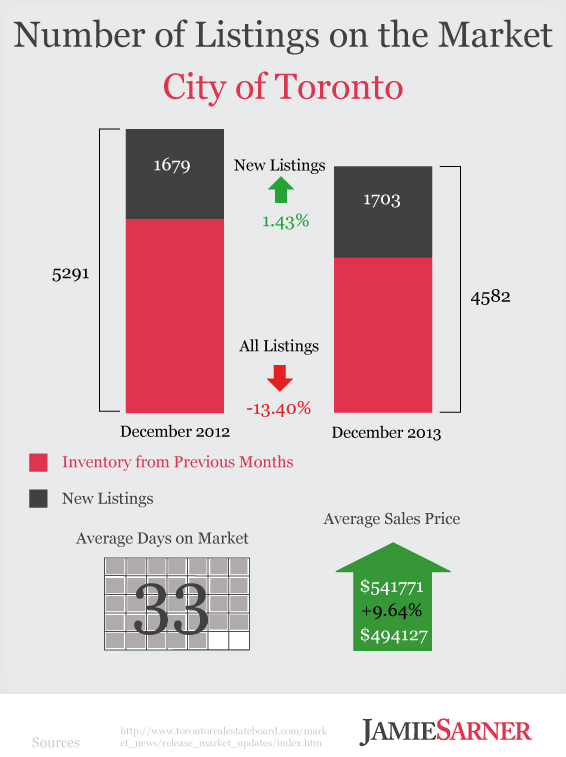 Even though the prices of high-rises increased, the gains weren’t as strong as in the low-rise sector. The difference in huge supply of condos compared to the undersupply of low-rises reflected in average price growth. An average condo in the GTA sold for $343,943 — a 6 per cent increase in price from December 2012. Moreover, condo prices in the City of Toronto went up 7.6 per cent, while prices in the suburbs rose 4.6 per cent.

Overall, the housing market in the GTA rebounded in 2013 after a 2012 slowdown caused by the tightening of mortgage lending rules. The numbers at the end of the year are solid, and we'll see if the market will continue to defy skeptics in 2014.