This Ottawa-centric blog breaks its articles into "Real Estate Information" and "Latest News & Events" for easy reading. Information pertaining specifically to Team Realty is in Latest News & Events, while broader real estate news and lifestyle articles can be found in Real Estate Information. The articles aren't updated as frequently as one might like, but what is there demonstrates some admirable community pride. Team Realty makes regular updates through Facebook, Twitter, Google+ and YouTube. 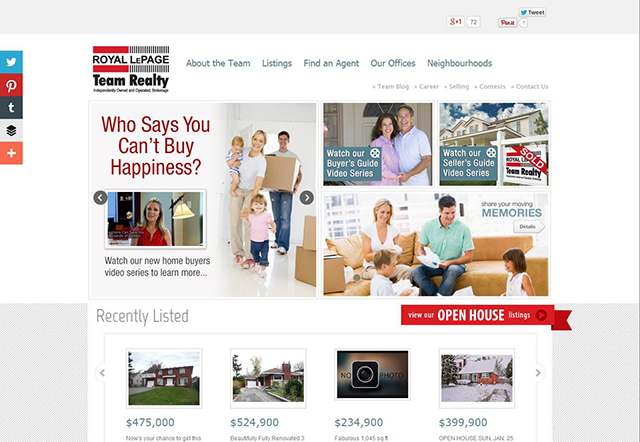 Toronto Livings dives headfirst into the environs of the Big Smoke. The frequently updated blog highlights arts and culture in the city and provides more intimate articles that showcase just what it's like to get caught in a bidding war and opinion pieces on things like Toronto's controversial land transfer tax. The front-page organization is aesthetically pleasing and easy to navigate, but when you delve deeper into the blog-proper the sheer volume of posts and lack of organization can be somewhat daunting. Toronto Livings can be found on Twitter, Facebook, LinkedIn, Google+, Yelp, YouTube and Instagram. 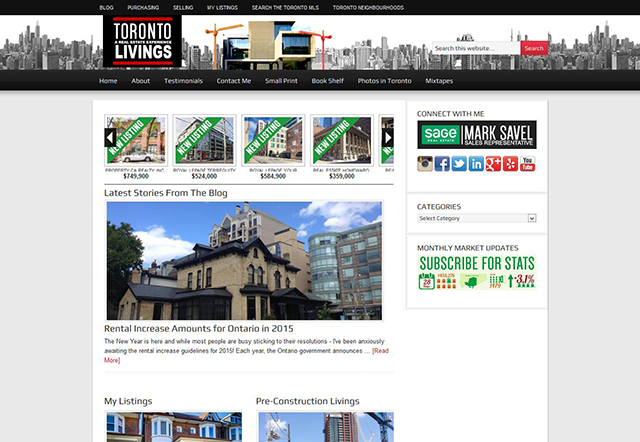 With its loaded name, Toronto Condo Bubble deals with the economics and politics surrounding Toronto's condo real estate market. While once frequently updated, new postings have dropped off since June of 2014. The articles present sometimes carry a conspiratorial tone, but are well-informed and offer insight that may not usually be part of the mainstream dialogue. They have a Facebook page, but once again, postings stopped last June. 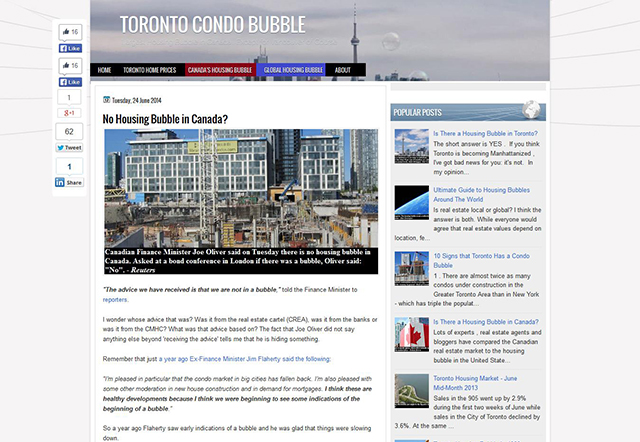 The Rest Will Come is a bilingual blog based out of Montreal written by Monique Assouline. Monique's posts are generally quite short and to the point, but her personality still shines through despite the low word count. She also posts on Twitter and Facebook. 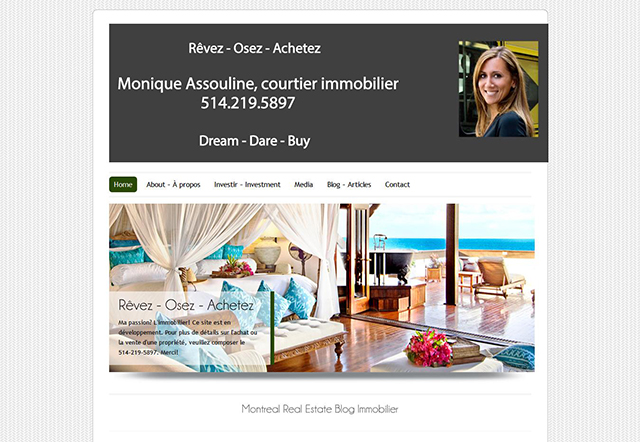 The Rest Will Come

Andres Paara and Karen Willison concentrate their efforts on the Blue Mountains-Thornbury-Collingwood area of Ontario. New posts appear a few times a month and profile the goings on of the community. Andres and Karen share their posts on Facebook and Twitter. 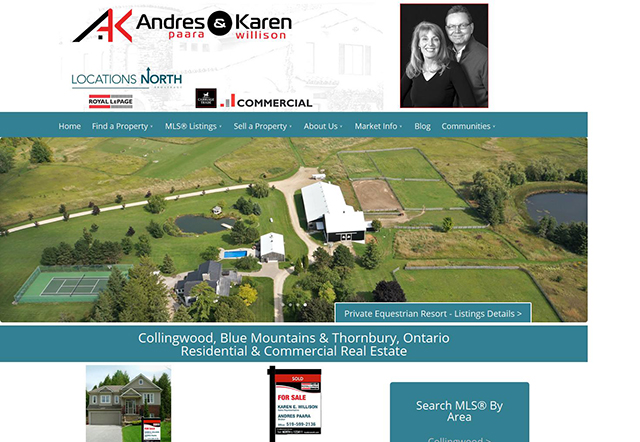 VREAA serves as a repository of sorts for the stories surrounding Vancouver's booming real estate market. The straightforward WordPress layout is nothing to write home about but the articles delve deep into the goings on of Vancouver's housing market offering insight and analysis. The blog suffered from a lack of posts in 2013, but appears to have bounced back somewhat with sporadic updates throughout 2014. 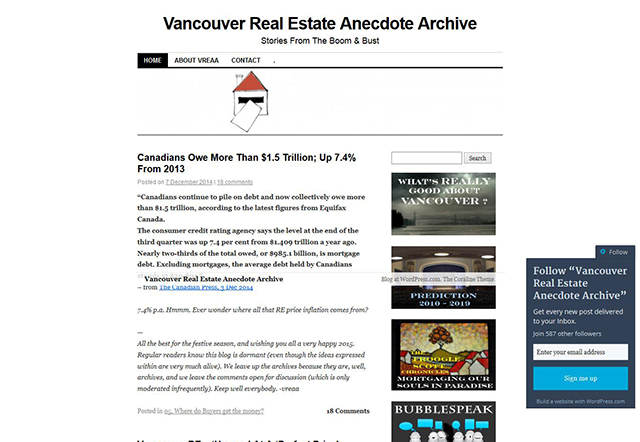 Mark Mauer and his team concentrate their efforts on Ontario's Kitchener-Waterloo area. New posts show up about once a week, and the design has a comforting effect even if the colours are somewhat bland. Mark and his team post to Facebook, Twitter and Pinterest. 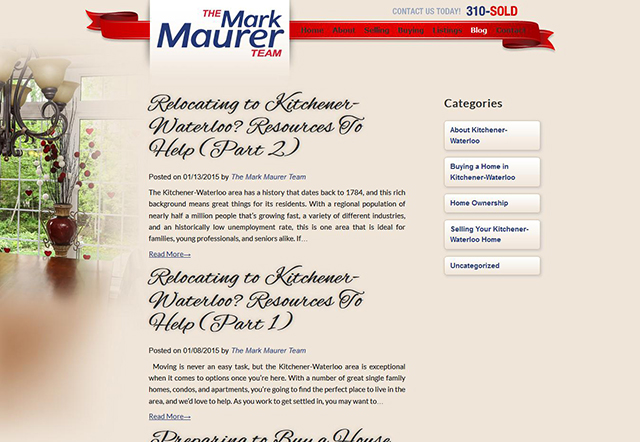 At Home in Hamilton
The regularity of posts to At Home in Hamilton has declined, but up until November of last year were fairly regular so there is hope that this blog will see some renewed life soon. Hopefully that will come with less exclamation marks, as every article's title seems to be shouted at the reader. The content focuses on buying and selling in Hamilton and doesn't really dig any deeper, but the site does provide a certain charm that shouldn't be overlooked. Twitter, Facebook, LinkedIn, Pinterest, Tumbler and Google+ are all used. 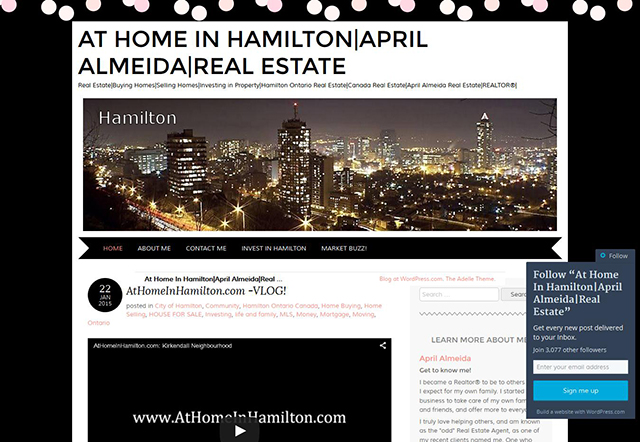 At Home in Hamilton

Rosemary Papp
Rosemary Papp brings her 30 years of experience to this blog, which focuses on British Columbia's Langley Valley area. The site is regularly updated with new property listings and tips for buying and selling. This is a good place to go if you're buying a home for the first time as recent posts concentrate on the basics of home buying. Posts are shared through Facebook and Twitter. 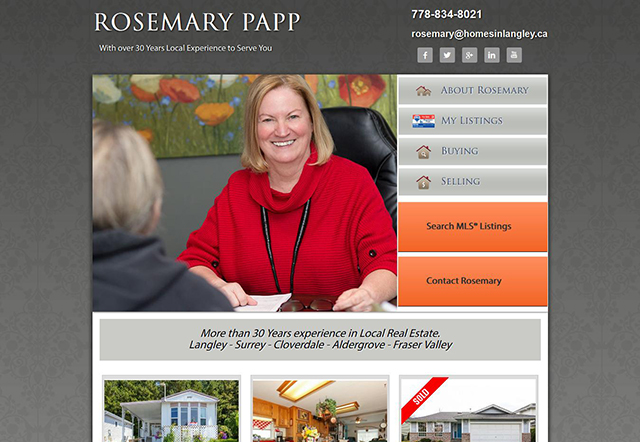 Harry Kramm
Harry's site comes in that familiar Sotheby's blue and white. The basic design is pleasing to the eye, but the posts are infrequent. Harry was raised in Ireland before moving to Vancouver in 2000. As such, he posts about real estate trends in his current place of residence as well as his home country. Articles are shared through Facebook and Twitter. 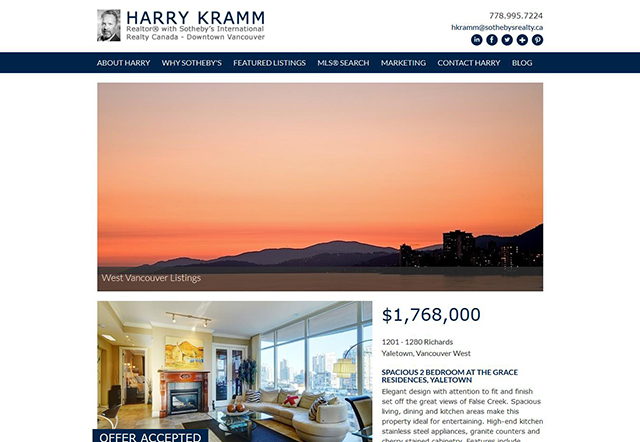 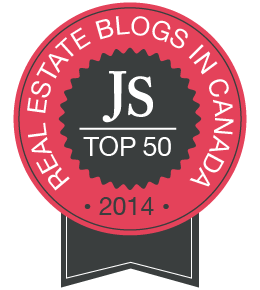 Thanks for compiling this list, it makes it a lot easier to find quality information on the real estate in Canada. My husband I will be moving there soon for him to be a professor. I am glad that the school gave him a work visa or it would have been really hard to move there.

Thanks for including me in your Top 50 Blogs! If you are looking for more than just the most recent posts, visit my Blog at http://www.jameskilloran.co.
They’ll see articles like:
1) Do Realtors ever wear an old pair of jeans or shorts?
2) Yes, I will show you a property at 8:30am tomorrow.
3) What do you mean. I don’t own my own balcony?
4) Why do Realtors drive such nice cars
James Killoran

What a great initiative. Thank you so much for including me!

A bit surprised RealtyForSale isn’t on this list. It may be considered new, but they have done a great job of blogging on real estate matters in Canada.

What a fabulous list!!!! Thanks so much for compiling.
As a real estate investor, it is so helpful to have a resource like this.
For 2015 consider adding: RevNyou.com – Julie Broad is an incredibly smart woman, blogger, vlogger, speaker, trainer, best-selling author etc and her site’s content is really superior & regularly updated.

Thank you for sharing – it was a brilliant idea!
For more details please visit our website @ http://ozonepark.co/

Great piece of information for the real desperate for Real Estate Investment Blogs.
Nice work, appreciate your work!!! Thanks for this information.

Amazing list of top real estate blogs and like a who’s who list of people to network with. Some new to me but many familiar faces, all seem to provide a ton of valuable content. I am very fortunate to be connected to so many of them.Thank you for taking the time to list all of these great real estate bloggers in one location.

Thank you for your comments, I appreciate all of them!

Great list of Top 50 Canadian Real Estate Blogs 2014, looking forward for more in this 2015. .really enjoy reading on it. .thanks for sharing. .

Hi. I am very excited to have made your list (#15). However the picture you show is actually of my website. My BLOG is found at http://blog.winnipeghomefinder.com and has a lot more information on it than my listing website.

Thanks again for the honor
Bo Kauffmann

Hi Bo,
Thank you for your comment. I replaced the screenshot and the link to your blog.
Best regards,
Jamie Sarner

I am very fortunate to be connected to so many of them. Thank you for taking the time to list all of these great real estate bloggers in one location.

Great piece of information for the real desperate for Real Estate Investment Blogs.
Nice work, appreciate your work!!! Thanks for this information.

thank you for sharing

Great information
Thank you so much

informative resource site, i particular enjoy the facts that there is a very diverse collection of site, ranging from regional real estate specialists, to a site that cover a more national real estate market. great work!

Great blog. Thanks for all the great information.

Excellent post Jamie. I have been searching for Toronto real estate blogs for information on market trends, etc. Having the all the best blogs here in one place is extremely useful.

Your site is one of the best listings for real estate blogs.