Canada’s economy is changing. The price of oil continues to slide, putting pressure on the country’s once-booming crude industry. And as more people are being forced to look elsewhere for work, national and regional demographics are shifting.

The redistribution of labour around the country is causing a domino effect with other industries, especially Canada’s biggest real estate markets.

A recent survey by Royal LePage points to strong year-over-year price increases in the country’s residential real estate market in the first quarter of the year. The GTA and the Vancouver area continue to show the most appreciation in value. Montreal and its surrounding boroughs are seeing what the survey calls

"the most promising signs of renewal seen in recent years, posting home price increases and a noticeable surge in unit sales in the first quarter." 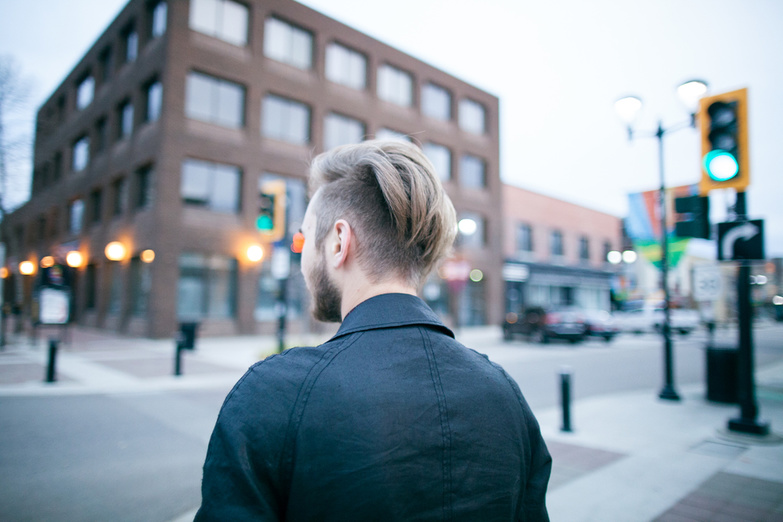 Going Where the Work Is

According to the survey, we’re beginning to see a trend of inter-provincial migration into British Columbia and Ontario. People appear to be leaving behind commodity-based economies like Alberta for urban centres with more diverse job markets. Phil Soper, president and CEO of Royal LePage said:

"Redistribution of labour across the country is further reinforcing disparities among housing markets, as the broader impacts of the oil recession on Alberta's economy take hold. For the first time in many years, we are witnessing an out-migration trend in the province, as economic conditions and employment prospects dim."

More recently, a study by the Bank Of Montreal shows that two-thirds of millennials in the city expect to buy their own home despite high market prices. Many say they’ll be relying on a loan from the bank of mom and dad to make the downpayment. But it seems that Toronto’s above-average housing prices haven’t squashed their dreams just yet. 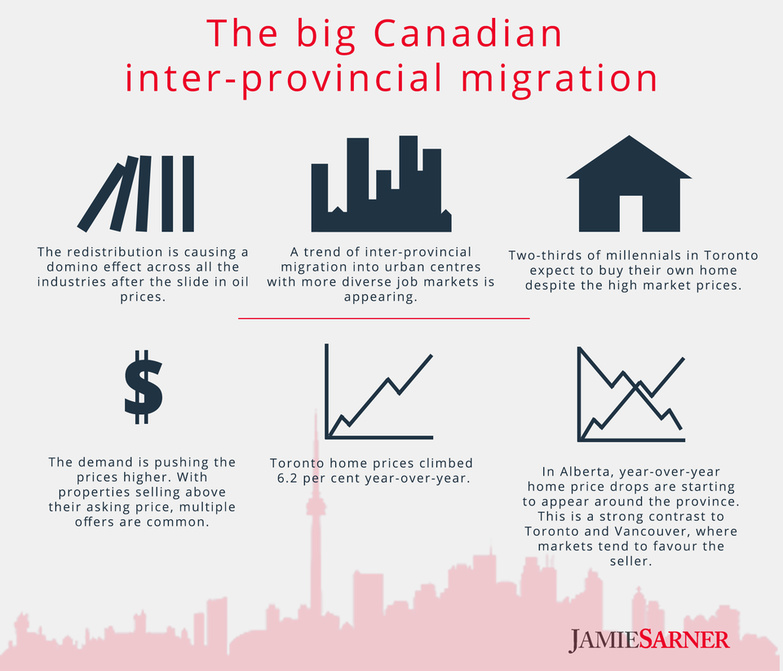 The migration toward the Big Smoke is having a huge impact on Toronto’s surrounding communities as well. A separate survey found that prices in the GTA have climbed significantly since the previous year, with the biggest boom coming from Toronto’s suburbs. The study's author wrote:

"Milton and Brampton to the west, Richmond Hill, Vaughan and Markham to the north, and Whitby and Oshawa to the east all saw aggregate prices surge by more than 10 per cent year-over-year."

Dwindling options in the city proper coupled with increased demand are prompting people to look outside the city limits. The demand is putting pressure on the surrounding areas and pushing prices higher. According to Gino Romanese, senior vice president, this is causing multiple offers to become commonplace, with many properties selling above their asking price.

All municipalities besides Oakville saw growth, with the biggest price appreciation happening in Durham Region. Durham continues to appeal to first-time buyers who have been largely priced out of the Toronto market. Prices in Whitby and Oshawa jumped 15.4 and 14.3 per cent from the same period a year earlier.

Inside the City Limits

We continue to see growth in the first quarter of 2016. Toronto home prices climbed 6.2 per cent year-over-year. The study’s author writes that, while many people are migrating to the area and fuelling demand, a large number of people already living in the city are choosing to stay where they are to avoid the competitive and high-priced nature of the Toronto housing market. 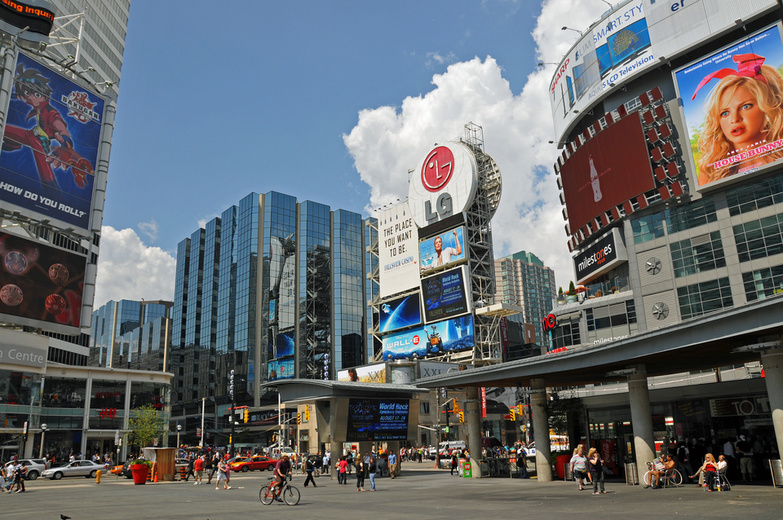 "A Tale of Two Markets"

This is a pretty common concept in Canadian real estate. The phrase has become so pervasive it’s almost cliche, but it remains applicable.

In Alberta, year-over-year home price drops are starting to appear around the province. The study suspects that Calgary will see the biggest adjustment downward in the coming months while prices in Edmonton remain relatively flat. This is a strong contrast to Toronto and Vancouver, where markets tend to favour the seller.

The labour redistribution across Canada is even more augmenting discrepancies between housing markets. In Alberta, the oil recession has broader impacts to the province. The out-migration trend is stronger, as economic conditions and employment prospects dim.

"We expect British Columbia, followed by Ontario, to be the top recipients of new household inflows in the coming year, which will further fuel housing demand and price appreciation in Greater Vancouver and the GTA. This is in sharp contrast to the situation from 2011 to 2014, and in the mid 2000s, when a booming energy sector attracted families from all over Canada to Alberta."

Perhaps the most interesting finding in the surveys was the growth being seen in the Greater Montreal Area. The region’s economy has been stalled for a number of years, which has impacted the residential real estate market. But we’re beginning to see signs of renewal led by a "dramatic increase in home sales activity, which rose 9.4 per cent year-over-year," the study found. 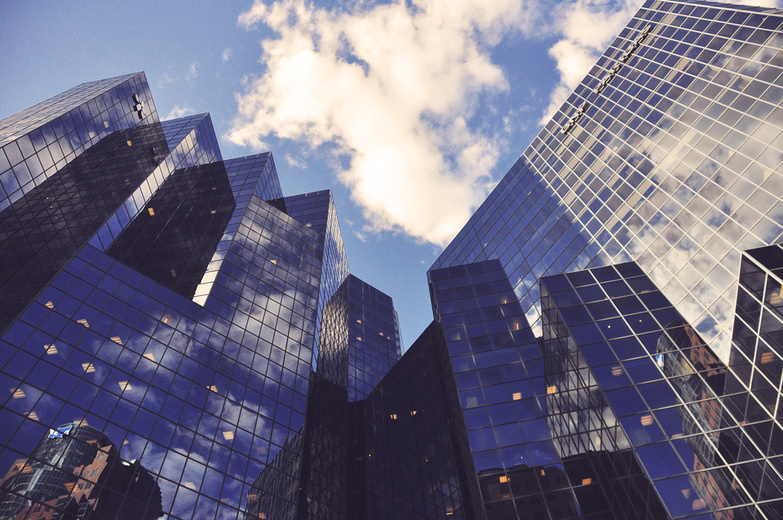 As Soper stated, the remarkable upswing in sales and demand in The Greater Montreal Area indicates stronger home price appreciation:

"While Quebec has been slower to reap the economic benefits of more affordable energy costs in addition to the big three factors driving markets elsewhere in Canada – low interest rates, a lower dollar and expanding U.S. economy – the region is turning a corner. My vote goes to Montreal as the city most likely to exceed expectations in 2016."

Healthy manufacturing and service sectors are expected to bolster the renewal in the coming year as local infrastructure projects should help local employment levels. According to Soper, there's a change of mood in Quebec:

"This year we expect to see improved business and consumer confidence in the province, which will result in stronger demand for larger purchases such as houses. Home buyers are well positioned as housing is much more affordable than in other large business centres such as Vancouver and Toronto."

People continue to go where the work is. And while Canada’s oil business may not be what it once was, there remains enough opportunity in many regions of the country. That hope continues to drive demand in the housing market.