All the info in the article and the infographics are from Dave Larock's blog posts about the mortgage changes, published on October 17th and October 19th.

The first one out of the several mortgage-rule changes announced by the Canadian government came into effect last week. The rest of the changes will take place on November 30. Read more about what's going to change here.

Dave Larock, a mortgage planner of the Integrated Mortgage Planners, had a few things to say about the possible long-term impact of these specific changes on the borrowers, the lenders and the Canadian housing market, in his latest article. 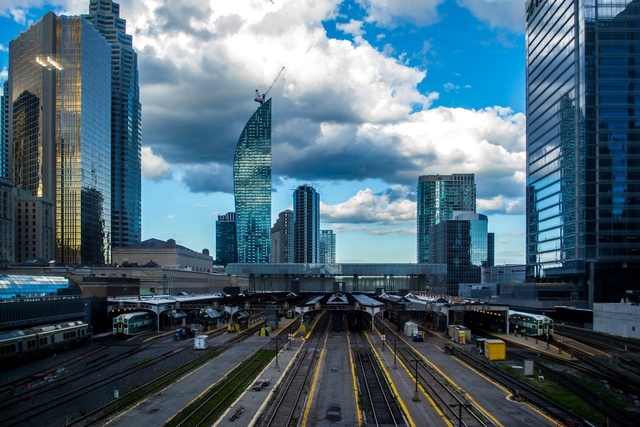 According to Larock, the measures to control the borrowing debts in Canada are already overdue. It all started with the Great Recession in 2008:

Our economic growth rates have hovered just above stall speed since the start of the Great Recession in 2008, and much of the meagre growth that we have enjoyed over the past nine years can be tied to a sharp rise in our household debt levels.

This debt-for-growth trade off was initially easy to make in 2008, when the world teetered on the brink of depression and policy makers were willing to pay almost any price to avoid that outcome. At that time, allowing debt to expand further while the U.S. economy regained traction and our export demand recovered made sense, especially if it fuelled a rise in business investment that would help our exporters reposition themselves in the bargain. But our export recovery has been much slower to materialize than expected, and that hoped-for rise in business investment just hasn’t happened.

Instead, households have used ultra-low interest rates to increase their borrowings to record levels, and since the collapse in the price of oil last year, household-debt fuelled growth has been just about the only thing keeping our economy out of recession. (A recent Stats Can report showed that our real estate sector now accounts for about half of our total GDP growth.)

The ultra-low rates period has continued from 2008 until now has fueled a steady expansion of the Canadian debt ever since. The debt-to-disposable-income-ratio, which is used to measure the average Canadian household's ability to pay off their debt, is currently at about 165 per cent, which is just slightly lower than its all time-high. If Canada should experience significant rate increases, the ratio could rise much higher.

According to Larock, the policy makers have grown concerned about real estate investment based on the belief that the prices will simply continue to rise. We've seen prices skyrocket in major markets like Toronto and Vancouver, but the same thing is happening in surrounding markets on a slightly lower level:

History has shown that if hot real-estate markets are allowed to run unchecked, the situation always ends in tears, and as Winston Churchill famously said, “Those who do not learn from history are doomed to repeat it.“

Today, total Canadian household debt outstanding has risen to just a shade below $2 trillion, and in the second quarter of this year, that number exceeded our country’s overall GDP for the first time ever. Of that total, our current mortgage debt outstanding accounts for about $1.3 trillion, and that number is skewed toward relatively new housing-market entrants because about one-third of Canadian home owners are mortgage free.

As our overall household debt level has continued to expand, so too have the vulnerabilities associated with it, and against that backdrop, I believe that our policy makers’ instinct to take further action was prudent.

So raising the costs of taking on mortgage debt is a good place to start if you're trying to slow down the number of mortgages taken by Canadians.

About 40 per cent of all Canadian mortgages are insured by default by the federal government, which serves as a guarantee that these loans are bullet proof and which reduces both the lender's cost of funds and the amount of capital they need to set aside for each insured loan.

Larock says that by raising the criteria used to qualify insured loans and by restricting the types of mortgages that are eligible for insurance, the government is helping to reduce the expansion of insured loans going forward. And as an added bonus, the changes will help raise the mortgage rates without the need to change the policy rates in a way that would impact the broader economy, which might negatively impact the business investments Canada's government is trying to encourage.

Larock summarized the changes and the benefits that will accumulate over time with this approach: 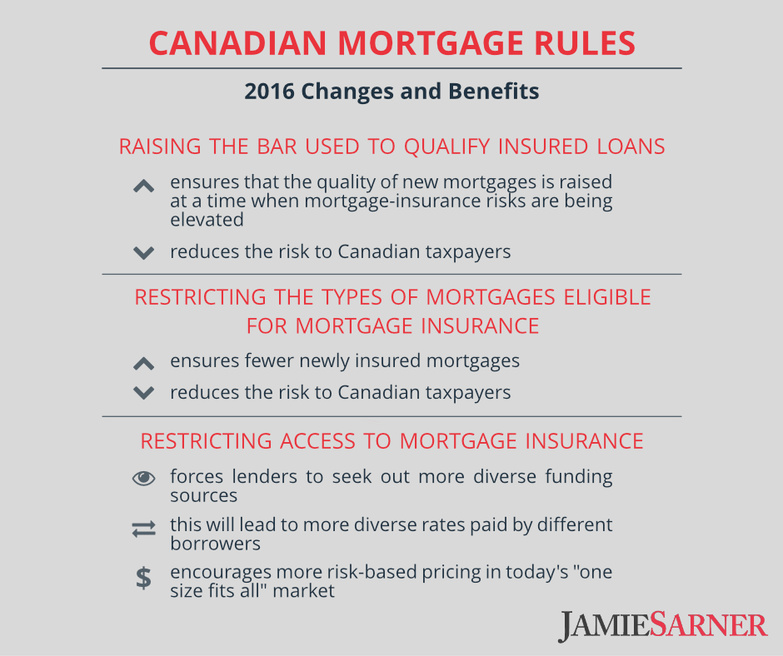 According to Larock, the logic behind these changes is sound, but they're still going to produce more losers than winners:

Dave Larock mentions that the above listed changes address roughly 40 per cent of the mortgages that are default insured, but what about the other 60 per cent?

If our policy makers are really making these changes to push mortgage rates higher and to reduce taxpayer risk, will our banking regulator, the Office of the Superintendent of Financial Institutions (OSFI), implement similar changes for banks, credit unions and other balance-sheet lenders, who fund the bulk of their mortgages with deposits that are federally insured by the Canadian Deposit Insurance Corporation (CDIC)? And at a cost that is much lower than the fees charged for mortgage insurance? 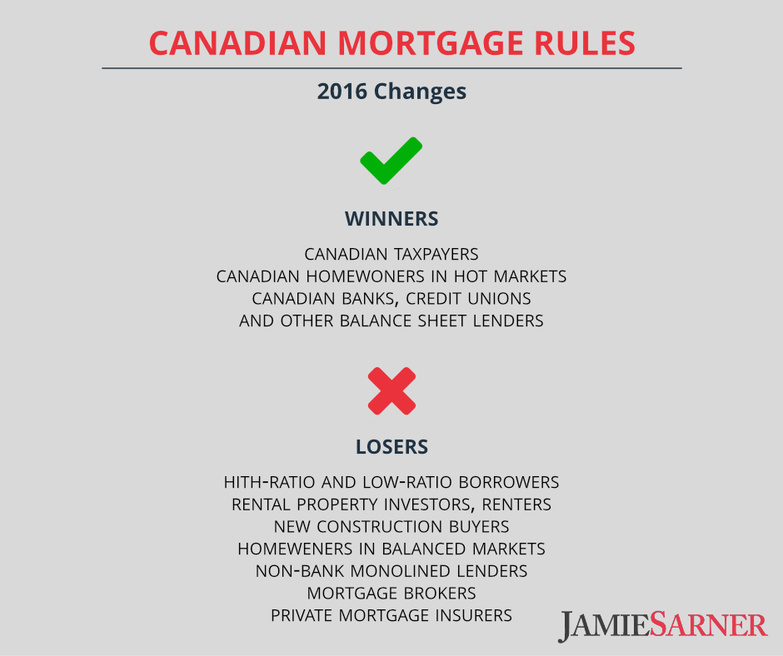 The above mentioned changes affect less than half of the market and according to Larock, they're obviously heavily in favour of balance sheet lenders, which concerns him:

If these are the only changes that our regulators make, and if OSFI doesn’t act, there will be industry and borrower casualties, and while the banks will celebrate, the government’s stated objectives will simply not be met. All we will see is a redistribution of volume away from the borrower-friendly monoline lenders to banks. On the other hand, if OSFI does announce its own similar changes, the impact will be much more substantive, and we will know once and for all who drafted these rule changes – the bank lobbyists or the government.

In his next article, published on October 19th, Larock proposed three tweaks that he thinks Canadian policy makers should make to the latest round of mortgage rule changes. He also said no industry insiders were consulted before the goverment announced the changes!

Change how the Mortgage Qualifying Rate is Set

The Bank of Canada calculates the MQR by taking the average of the posted five-year fixed rates listed by The Big Six Banks (RBC, TD, Nova Scotia, CIBC, BMO and National Bank). According to Larock, these rates are not used for actual lending, but instead, they're used to inflate the rate of the fixed-rate penalties that banks charge their customers:

It would make much more sense to base the MQR on some sort of real-market rate. For example, the BoC could use an average of the Government of Canada (GoC) five-year bond yield over the past twelve months with an additional premium added on top, and it could then reset this rate on the first business day of each month if the underlying average GoC bond yield moved by more than 10 basis points in the interim. Basing the MQR on a real-world rate would represent an enormous step forward without compromising the Department of Finance’s objectives in any way.

Larock says that without this tweak, the government is surrendering control of the MQR to the Big Six, which means these banks will have the power to determine the number of borrowers that can qualify for an insured mortgage and they might use this to their own advantage to get slow down the competition - the non-bank lenders relying on insured-mortgage funding.

According to Larock, changing the way MQR is calculated would also eliminate the potential for conflicts of interests, because in this case, "a sub-group of market participants is given control over the setting of a key policy rate" and using a market-based rate for the MQR would be more logical and more importantly, fair.

Allow Refinance Transactions to Be Insured

At the moment, low-ratio borrowers can qualify for five-year fixed rates at the contract rate (about 2.39% today), and they can amortize their payments over thirty years. After November 30, these borrowers will have to qualify under the MQR (4.64%) and they will only be able to amortize their mortgage over twenty-five years.

According to Larock, these changes will significantly reduce the number of borrowers eligible to refinance their mortgages, while those who can still qualify will see their maximum loan amounts significantly lower.

Given their magnitude, I think that our policy makers should allow some time for the MQR and reduced amortization changes to filter through the mortgage market before deciding to make refinances ineligible for mortgage insurance altogether.

The decision to eliminate insurance on refinances was the most devastating for private insurers, Genworth and Canada Guaranty), who rely on refinance transactions significantly, and for monoline lenders, who use mortgage insurance to fund a big part of their loans. And while the larger monoline lenders have access to other funding sources, a lot of the smaller monolines do not, so they will no longer be able to compete in the refinancing market:

Whether they knew it or not (because again, they didn’t talk to industry participants before announcing these changes), by eliminating refinances from the insured mortgage pool altogether, our policy makers have sounded a death knell for a sub-group of monoline lenders. From a consumer standpoint, these lenders offer the fairest terms and conditions and their mortgage rates force the big banks to be more competitive than they otherwise would. 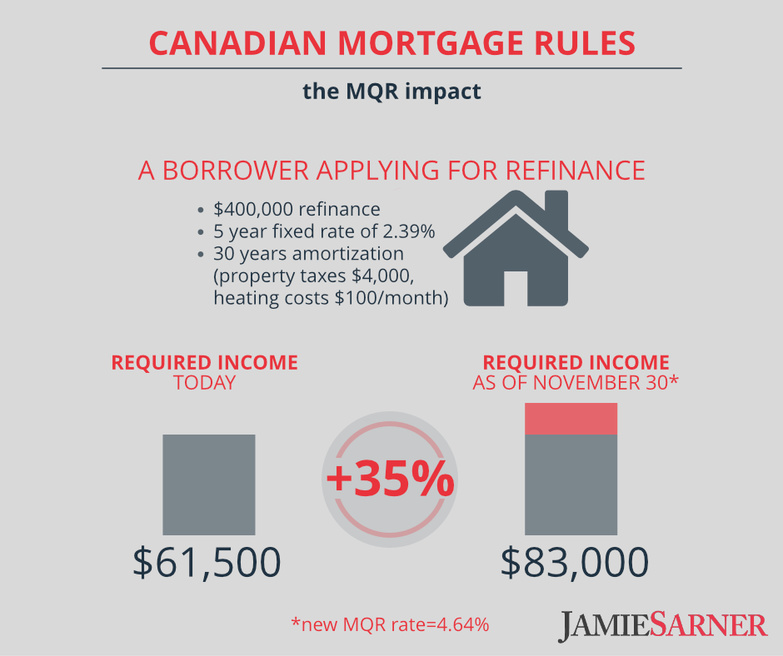 Extended amortizations allow a borrower to repay their mortgage more slowly by lowering the minimum contractual payment. For example, a $400,000 mortgage that comes with a five-year fixed rate of 2.39% and is amortized over 25 years requires a minimum monthly payment of $1,770. If that same mortgage were amortized over thirty years, the minimum monthly payment would drop to $1,555.

Using the example above, if the borrower opted for a thirty-year amortization, their minimum payment would be $1,555. But if they scheduled an ongoing additional payment of $215, to be taken automatically on their regularly scheduled payment dates, their balance at renewal would be the same, to the penny, as it would have been if they had chosen a twenty-five year amortization instead.

Using extended amortizations in this way allows borrowers to create a self-managed, cash-flow buffer, which can be used to absorb future payment shocks (because borrowers have the discretion to cancel their prepayments in future if needed).

It is very early to predict the long-term impact of these changes, but they do seem a bit rushed. In fact, the Department of Finance has already delayed the implementation of the MQR "stress test" for low-ratio borrowers. It should've been implemented on October 17th for both high and low-ratio borrowers. This shows that these changes might not be final and that we can expect possible adjustments in the future.