All the info in the article and infographics are from Dave Larock's blog posts about the mortgage changes, published on October 5th and October 11th.

Canada's Finance Minister, Bill Morneau announced several major changes to mortgage rules. According to Globe and Mail, the changes seem to be "aimed at ensuring Canadians aren't taking on bigger mortgages than they can afford in an era of historically low interest rates."

First of the changes used to underwrite insured mortgages will be implemented on October 17th, followed by changes taking place on November 30th.

To understand the what the changes mean, let's first look at the current rules for insured mortgages.

Every buyer with a down payment of at least 5 per cent of the price, but less than 20 per cent must be backed by mortgage insurance. This kind of a loan is also known as "high loan-to-value" or "high ratio" mortgage. When the buyer has 20 per cent or more for a down payment, the lender can obtain "low-ratio" insurance, which covers 100 per cent of the loan in the event of a default. This will change as of October 17th.

Dave Larock explained the changes and their possible impact on his blog, so we'll use his explanation to show you what you can expect. 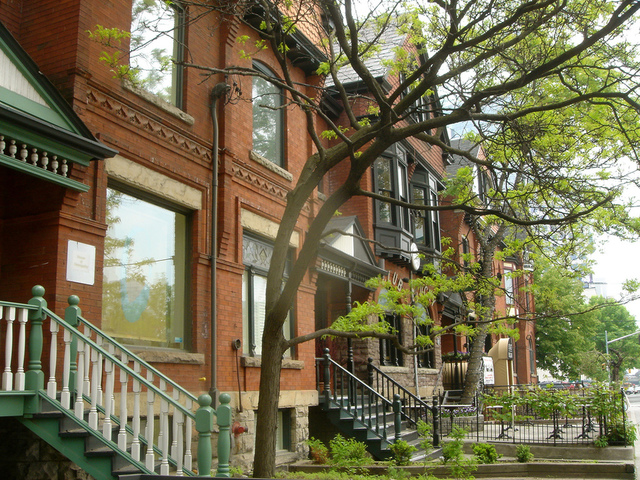 The MQR was implemented on April 19, 2010 as a response to the lessons learned from the US housing crisis. The MQR requires high-ratio borrowers who want to take out either variable-rate loans or fixed-rate loans with terms of less than five years to qualify using a rate that is higher than the actual rate on their mortgage.

Today, the MQR is 4.64 per cent, which is almost double what you would pay for a market five-year variable-rate mortgage, and this difference helps to make sure that the borrowers can afford higher payments in case of a mortage rate increase.

On October 17, this so-called MQR "stress test" will be applied to all insured loans including fixed-rate terms of five years and longer. This days, "insured" doesn't just refer to the high-ratio borrowers who have down payments of 20 per cent and less. Today, a lot of low-ratio borrowers, who have 20 per cent or more in down payments are also insured, only because the lender typically bears this cost, the borrowers never even know it. (Lenders buy low-ratio mortgage insurance, called "portfolio insurance", because once these mortgages are insured against default they can be securitized more cheaply.)

Half of mortgage lenders will now have to use the MQR to underwrite every loan they make, regardless of the size, type or down payment. The other half have funding alternatives that don't require mortgage insurance, but they cost more to use and their increased usage will push the rates higher.

Here's how the impact of the MQR change will look from a borrower's perspective using three different examples. 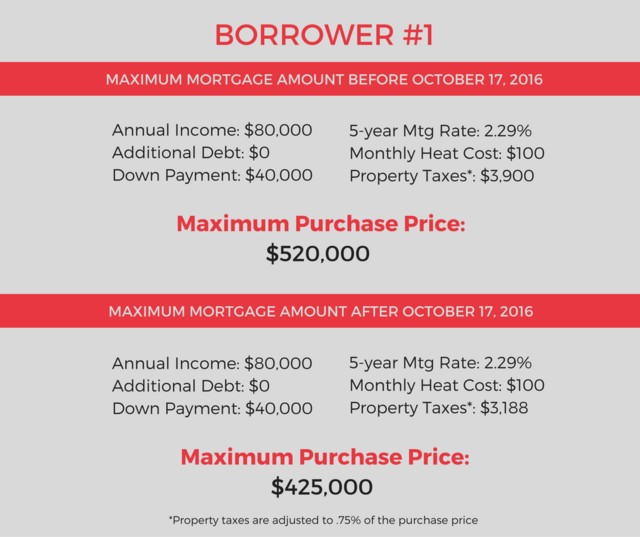 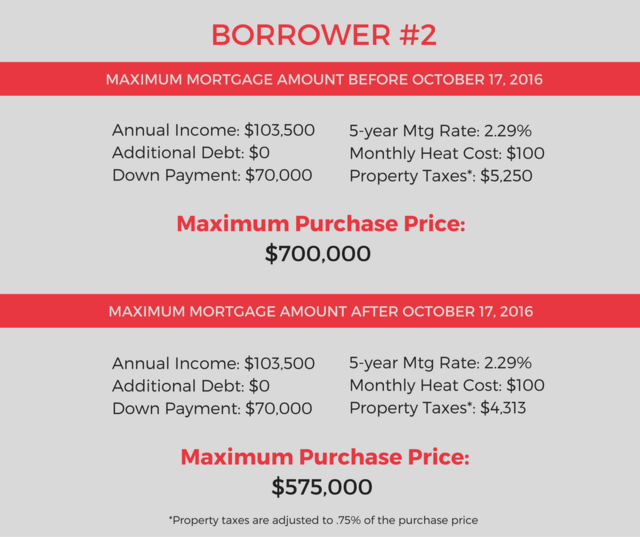 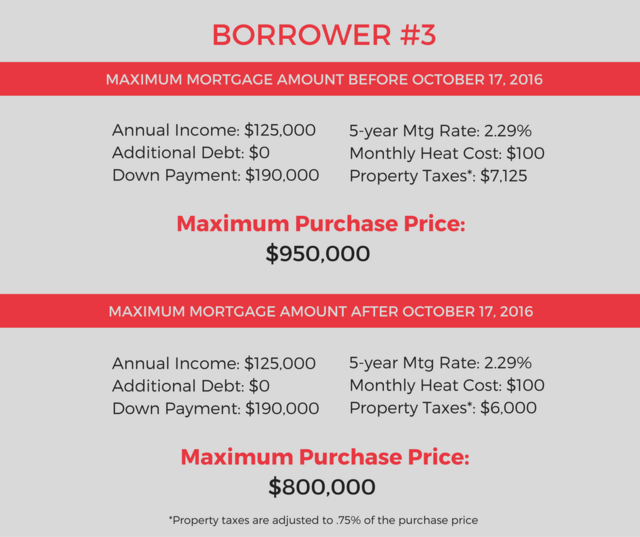 The first rule changed raised the bar the qualifying bar for mortgage insurance. The second rule changes completely eliminate mortgage insurance for certain categories of borrowers. The affected borrowers will still have access to mortgages, but they will have fewer options than before and they should expect to pay higher rates than the lowest rates available.

An "insured mortgage" is backed agains default by the federal government (a.k.a. Canadian taxpayers). When an insurance policy is in place, a properly underwritten mortgage is basically bulletproof. In case of a borrower who stops to pay their mortgage, the lender will seize and sell their property, and if the sale proceeds are less than the outstanding balance of the mortgage, the insurer will reimburse the lender.

Mortgages with this kind of protection can be sold to investors who will accept slightly higher interest rates than those paid by our federal government when it borrows money. The protection also reduces the amount of capital that lenders must set aside for each loan they make, which then reduces the lenders' cost of the funds. Our policy makers are worried that the current $450 billion in insured mortgage-backed debt outstanding represents too much risk for Canadian taxpayers.

"Portfolio insurance" for low-ratio mortgages has become increasingly popular with lenders. They pay for the default coverage themselves because the benefits of reduced securitization costs and lower capital requirements that come with this protection are worth more to them than the cost of the coverage. Today, low-ratio portfolio-insured loans account for 35 per cent of our total residential insured mortgages outstanding, and the vast majority of the borrowers whose mortgages are portfolio insured don’t even know it.

And it is the group of low-ratio borrowers who will be impacted by the November 30th changes.

Here is a summary of the mortgage types and features that will no longer be eligible for low-ratio mortgage insurance after Nov 30th. 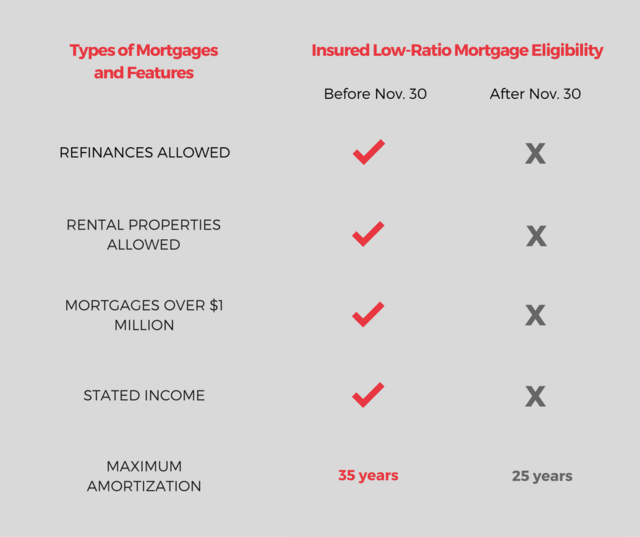 So when these types of mortgages and features are no longer eligible for low-ratio mortgage insurance, lenders' costs to fund these types of loans will rise, and the lenders will recover these increased costs by charging higher interest rates.

Lenders have already begun announcing surcharges on new mortgage applications for refinances and for rental-property loans that will close after November 30. Some lenders have suspended lending on rental properties altogether and you can expect similar announcements to continue over the coming weeks.

I am thinking of refinancing my mortgage. My loan right now is 259k. The price of my house now is expected to be above 500k. Am I affected by the new mortgage rule after nov 30?

Hi Mina,
I suggest you to ask Dave Larock, the mortgage agent mentioned in this article. You can find more information about him on his website http://www.integratedmortgageplanners.com/ and contact him at dave@morplan.ca
Best regards,
Jamie Sarner